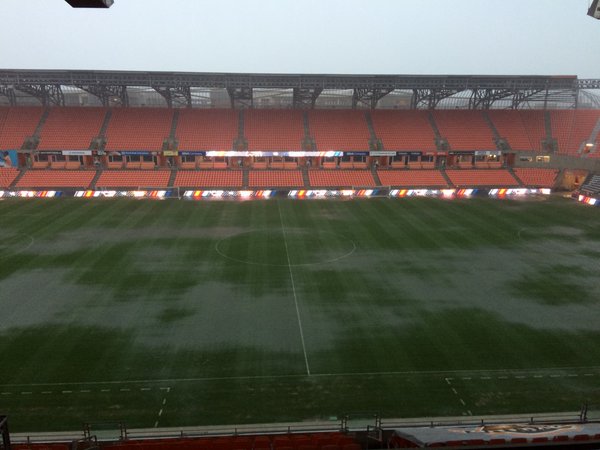 Severe storming and heavy rain forced Friday’s Houston Dash match against the Washington Spirit to be postponed. The league did not announce a makeup date. Rain hammered Houston for much of Friday and was expected to continue well into the night.

The Dash and Spirit are no strangers to long weather delays. In 2014 they waited four hours at Yurcak Field before having their match at Sky Blue FC postponed. It was replayed three days after the regular season was to have ended.

The Spirit had a match against the Red Stars postponed last season in Chicago. In that game, Megan Oyster had her first career goal wiped out by the postponement only to wind up scoring one that counted when the match was rescheduled. The Spirit and Red Stars also waited out a long rain delay during a 2013 match at the Maryland SoccerPlex. That one was eventually called after 80 minutes and the result officially eliminated the Red Stars from playoff contention.

The only other NWSL matches cancelled or shortened involved the Breakers and FC Kansas City. In 2013 the Breakers elected not to travel to Kansas Cit in the aftermath of the Boston Marathon bombing that saw Breakers defender Kia McNeill trapped in her apartment. The next year a match between the teams in Kansas City was called official after 45 minutes.