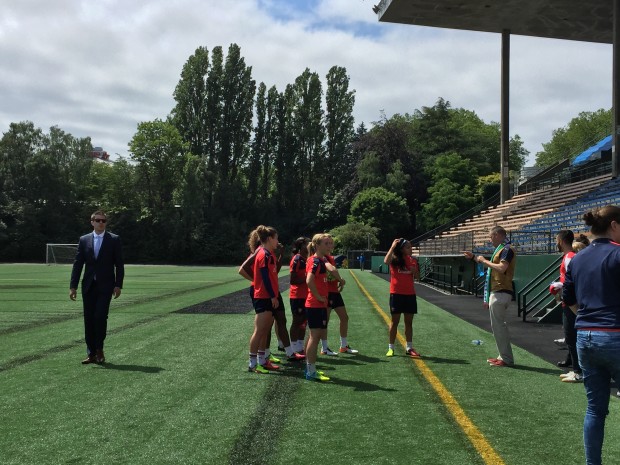 Some of the Arsenal Ladies side during a break from training at Memorial Stadium (photo credit: Harjeet Johal)

SEATTLE, WA – Seattle Reign FC vs Arsenal will be an unappreciated match tonight at Memorial Stadium in Seattle. Arsenal have traveled from across the pond for the opportunity to test themselves against an unfamiliar opponent. For fans of either side, this is a great chance to watch the tactics of a top NWSL club vs a FAWSL club. This will be the first time either league has played against the other.

Reign FC Manager Laura Harvey was in charge of Arsenal from 2010 – 2012. Midfielder Kim Little started playing for the Gunners in 2008. Those are some of the storylines heading into this match that Arsenal’s Jordan Nobbs is looking forward to.

“I think it’s just good preparation,” said Nobbs. “Obviously we have a little break now anyway. Although this is very serious and we want to win the game, we still have a bit of time off to regenerate and re-boost ourselves. I think it’s a good learning curve for us as well and a great experience for us to play a top team in America. I think the way the women’s game is going in England, they’re becoming more physical and more fit. I think it’s only good to play against teams like this and get better.”

This match could potentially open the door for further matches between NWSL clubs and other club teams from all over the globe. It’s important to note, that while international friendlies between American and European clubs often take in men’s teams football during summer preseason tours. This is quite the rarity in women’s football. Many obstacles stand in the way of organizing a match like this and it’s not all about finances and travel.

“I think it’s hard because obviously everyone’s leagues are different,” said Nobbs. “Apart from that, I don’t see how we can’t get better teams playing against stronger teams in other countries. I think the more often we get to do this and get that team bonding as well, I think it’s only going to create a better team environment for everyone.”

Having Seattle and Arsenal on such good terms really played a huge part in arranging this friendly. Neither side would provide specifics on costs for Arsenal’s visit, but it can’t have been cheap. In the long run the timing just seemed right for everyone.

“I’m sure it costs to travel and get the team over,” said Nobbs. “I think that depends on the two teams pulling together and how much they want to play each other as well.”

This match has come at a perfect time for Arsenal as they have not played since winning the FA Cup Final 1-0 over Chelsea on May 14 at Wembley Stadium. Dan Carter scored an amazing goal to help Arsenal secure a 14th FA Cup victory.

“Yeah, it was an amazing score to be able to get us the goal, that won us the game,” said an excited Carter. “I was very happy. When it came over to me, I knew if I got in the box and shot early, I’ll catch the keeper out and I did. It was good.”

As for the 23 year-old’s next possible challenge? She would love to catch Seattle Reign FC goalkeeper Hope Solo off her line for another spectacular goal. Carter was not named to Mark Sampson’s England roster that will play a pair of Euro 2017 qualification matches in June. Having another strong match could go along way in showing the England gaffer just what he could be missing.

“I’ve only got one (cap) currently for the senior team. No, I’ve never played in America and I’ve never played against Hope Solo. It will be interesting. Oh, I would love to (catch her off her line), but yeah, she’s a great keeper.”

As women’s football continues to progress and make great strides all over the world. Matches between clubs like Seattle and Arsenal should be happening more often. It’s hopeful that this match will be a stepping stone for future international friendlies.
If you’re excited to attend or watch the stream, players like England international Jordan Nobbs are equally excited.