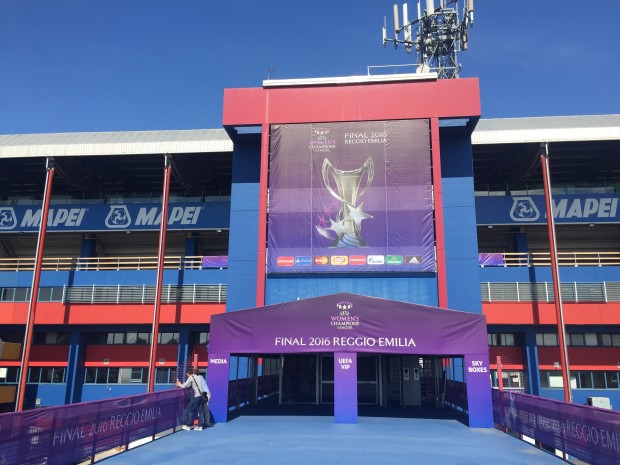 On Thursday, two of Europe’s biggest clubs will clash as each looks for a third UEFA Women’s Champions League title. The little-known 20,000-seat capacity Mapei Stadium in Reggio Emilia, Italy, will host French double winners Lyon and German Pokal Cup winners Wolfsburg in the finale of Europe’s biggest competition. The match sees a repeat of the 2013 final, where Wolfsburg ran out 1-0 winners at Chelsea’s Stamford Bridge, thanks to a solitary penalty from the now retired, Martina Muller.

Both clubs will face their sternest test when they face-off at 12 p.m. ET on Thursday, having almost cruised through to the final after some thumping wins right up to the last stage. They arguably saved their best performances for the semi-finals, with Wolfsburg overcoming last year’s champions Frankfurt 4-1 on aggregate over two legs, while Lyon dispatched of bitter rivals Paris St Germain 8-0 over 180 minutes – the home leg finishing 7-0.

Lyon last won the competition in 2012 when they defeated Frankfurt in Munich, 2-0, with two stars of the current team, Eugénie Le Sommer and Camille Abily, on target. While both will have an important role to play alongside the abundance of talent in the French side, they will no doubt look to the goal scoring exploits of 20-year-old Norwegian forward, Ada Hegerberg to try and fire them to glory in Italy.

The former Turbine Potsdam striker is one of the most in-form strikers in the world, bagging 53 goals in all competitions this season, which includes 12 in this season’s Champions League, making her the top scorer in the tournament. Key to her form, has been the relationship developed with strike partner and French international, Le Sommer. The duo embarrassed PSG in the semi-final with their movement and link-up play as they both scored a double each.

“We think the same and try to connect as well as possible in training every day,” Hegerberg said. “I know she will give me the pass when I should have it, which is a great strength for the team and for the both of us because we know we need to set each other up when in a position to score.”

The French club oozes class from back to front, with Sarah Bouhaddi acting almost as a ‘sweeper keeper’ at times, organizing a back four in front of her that contains the likes of Wendi Renard and Saki Kumagai.

Fans in the US will no doubt be keen to see Amandine Henry’s influence on the final, with the World Cup Silver Ball winner due to join the Portland Thorns this summer in one of the highest profile moves in NWSL history.

Its sure to be an emotional match for the French side, with Swede Lotta Schelin and Henry’s international teammate Louisa Necib also set to play their last match as they move onto pastures new this summer.

The French champions have moved quickly to soften the blow with the acquisitions of Caroline Seger and German Dszenifer Maroszan, and Hegerberg was quick to wish her teammate all the best in her new venture, while welcoming Maroszan.

“First of all, Amandine is a quality player and I understand why she wanted to do something new and have a good experience in the U.S., so I wish her all the best,” Hegerberg said. “We have a strong new signing in Maroszan and I look forward to seeing her in Lyon and its going to be exciting to see how she fits into our team.”

But while Hegerberg and her teammates will have to deal with the loss of Henry next season, her move is certainly not on the mind of the players going into Thursday’s match. In fact, for the young Norwegian, playing this Thursday’s final will see a dream become a reality.

“I’ve dreamt of playing in the final of this competition since I was a little kid, and to be honest I have been thinking about this game every day and picturing us winning,” she said. “Wolfsburg is a typical strong German team – physically strong and mentally strong and ready to play 90 minutes. But we need to concentrate on ourselves and can cause them a lot of problems. To win the competition would be the biggest achievement of my career, for sure, without a doubt.”

Wolfsburg has benefited heavily from recent investment over the last few years, winning a glut of trophies that includes two Champions League titles – the last in 2014.

Ralf Kellermann’s side is licking its wounds having lost out to Bayern Munich two years running for the German Bundesliga, but a win in the Champions League final on Thursday would surely be the best way to silence any doubters that may exist. Doubt them at your peril, for this is a team that, like Lyon, has ability and experience all over the field.

While Lyon have no injury worries going into the showpiece finale, Wolfsburg are missing two of their attacking threats in German Julia Simic and Norwegian Caroline Hansen. However, in their absence, the likes of winger Isobel Kerschowski have stepped up to the plate, while Ramona Bachmann and Alex Popp are experienced internationals that present plenty of goal threat.

Lena Goesling will have an important role in trying to create chances, but also maintaining Lyon’s dynamic midfield three, with the job made that bit harder with the absence of the recently retired, Nadine Kessler. Kessler, who pulled the strings and ran the show in the second half of Wolfsburg’s thrilling comeback in their last Champions League triumph over Tyreso in 2014, was unable to recover from a serious knee injury, leaving a hole any team would feel the effects of.

But there is still plenty of experience and quality in this Wolfsburg side – defender Nilla Fischer, with over 100 caps for her country, being one of them. Fischer, who was part of the memorable 4-3 triumph over Tyreso two years ago, is looking forward to Thursday’s final, especially with the memories of the last one she appeared in.

“When I think of that game (with Tyreso) I get goosebumps,” she said.

“I have to give credit to my team because they have a mentality that is something else, and in that second half we gave everything – it was a very intense game with a lot of feelings.”

Fischer had to mark the likes of Marta and Christen Press in that final, and she is fully aware of the threat this year’s opponents possess, knowing she will have to be at the top of her game once again to stop them.

“I think their biggest strength is in their attacking game, because in the French league the defense haven’t been tested so hard,” she said. “They have top forwards like Ada Hegerberg, who is in an awesome flow at the moment, but their main strength is in the final third and they are a very good technical side.”

For Fischer and her Wolfsburg teammates, defeating Lyon for a second time would arguably go down as one of the club’s biggest wins in their history. With a title already under her belt and an Olympic Games to look forward to this summer, when asked the question what it would mean to win another title, the defender is almost lost for words.

“That’s a hard answer to put into words, it’s the biggest title you can win as a club team,” she said. “When you reach that feeling to win the title, you just want to have it even more, so of course if we win against such a strong team like Lyon, its going to be on my top list of my life as a soccer player.”