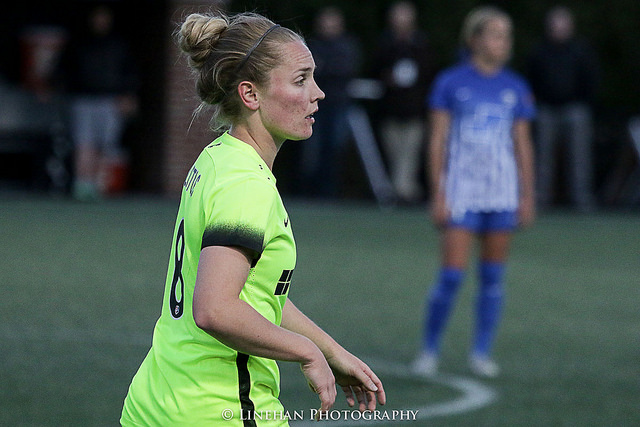 Kim Little was named BBC Women’s Footballer of the Year for 2016. (Photo Copyright Clark Linehan for The Equalizer)

Little helped Seattle win a second straight NWSL Shield in 2015, tallying 10 goals and seven assists in the encore to her 2014 NWSL MVP season. Unlike the four other finalists, Little did not participate in the 2015 World Cup after Scotland failed to qualify for the expanded 24-team field. She has 46 goals in 115 caps for Scotland, which currently sits first atop its group for EURO 2017 qualifying with a perfect record through five matches.

Little also won the W-League title in Australia with Melbourne City FC, scoring nine goals in the team’s unbeaten run to the title.

The BBC Women’s Footballer of the Year award is voted on by a collection of global journalists. Nigeria forward Asisat Oshoala won the award last year. It is an alternative to the FIFA Women’s World Player of the Year award, which was won this year by Lloyd.

“In its second year this award continues to celebrate the best talent in women’s football globally, showing how far the game has come in recent years,” said Mary Hockaday, controller of BBC World Service English. “Whilst inspiring people about the women’s game it’s a great opportunity for fans around the world to show their support and vote for their favorite player.”

[HENRY: I chose NWSL to have competitive games each weekend]