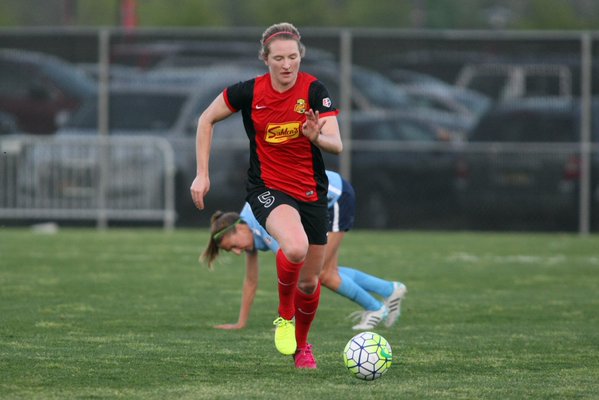 A crowd of 3,910 was on hand Saturday evening at Sahlen’s Stadium in Rochester to see the Western New York Flash prevail 5-2 over visiting Sky Blue FC.

Just over an hour before kick off, word from Sahlen’s Stadium was that Paul Riley had been suspended for the match and fined due to inappropriate conduct toward officials after his team’s match against the Orlando Pride last week. In Riley’s absence, assistant coach Scott Vallow was the acting Flash coach.

Jessica McDonald opened the scoring for the Flash in just the 6th minute of play with a header off of a corner kick from Jaelene Hinkle that beat Sky Blue keeper Caroline Stanley. The Flash added three more goals before halftime, courtesy of Sam Mewis, Lynn Williams, and a second from McDonald. The cherry on top came in the 61st minute, when Michaela Hahn added the fifth Flash goal, her first as a professional.

Kelley O’Hara was able to pull one back for Sky Blue in the 54th minute, with a beautiful curling shot taken from outside the penalty area that beat Flash keeper Sabrina D’Angelo. O’Hara was taken down later in the half by Taylor Smith and won a penalty, which Sarah Killion converted.

Sky Blue’s Raquel Rodriguez was unavailable for the match due to a hip flexor strain.

Next up for the Flash is a home game next Friday against the Boston Breakers, while Sky Blue are on the road again next Sunday to face the Chicago Red Stars.