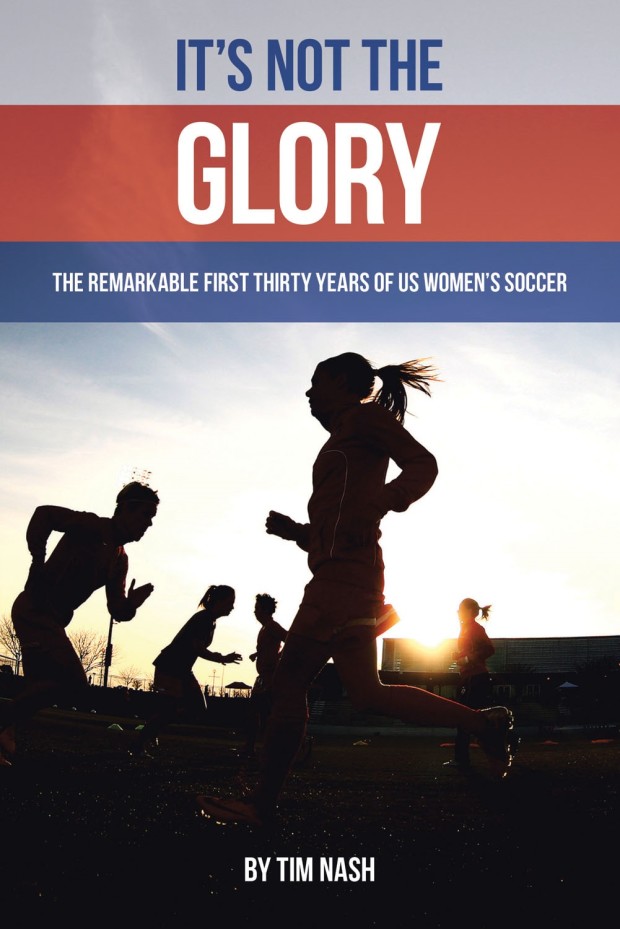 Below is an excerpt from Tim Nash’s new book, It’s Not the Glory: the remarkable first thirty years of US women’s soccer, a detailed look at the first 30 years of the U.S. women’s national team.  You can purchase your copy here.

What no one expected happened. Six minutes into the USA’s match with China, Michelle Akers went up for a header at the top of China’s penalty area. A Chinese defender, Fan Yunjie, who would later play for the San Diego Spirit in the WUSA, went up with her. Jumping from behind Michelle, Fan put her full force into the attempted header, but instead she drove her forehead into the back of Michelle’s head. Akers was unconscious before she hit the ground.

Initially, the U.S. players didn’t realize the extent of the damage. They had seen Michelle go down in a heap countless times, the victim of reckless tackles or futile stabs at limiting her effectiveness. Ironically, Amy Allmann, Michelle’s teammate from 1991 and college roommate at the University of Central Florida, was in the broadcast booth as the color commentator for ESPN2. It was her job to describe the replays. “When they showed the replay, it was the first time I’d seen it,” remembered Amy. “I couldn’t say a word. J.P. (Dellacamera, the play-by-play voice) had to tap me on the shoulder to get me to say something. Everybody who was watching was probably thinking, ‘I wonder how they U.S. is going to play without her.’ I was thinking, ‘I hope she’s not paralyzed.’”

Tiffeny Milbrett, four months’ shy of her 23rd birthday, watched from the sidelines. “Usually, Michelle gets whacked and bounces right back up,” recalled Tiffeny. “But this time, she didn’t even move. I was worried for her, saying to myself, ‘C’mon Mish, get up!’ And then horror set in when I heard Tony say, “Milbrett, warm up.’ I was like ‘Holy crap! I’m going in!’” As Milbrett hurriedly prepared to enter the game, Michelle slowly got to her feet, and as had become her custom, waved off the stretcher. But she was done. Because she was unconscious before she hit the ground, she landed badly on her right leg and sprained her MCL.

The USA responded to Michelle’s absence well. Tisha Venturini put the Americans ahead 1-0 four minutes after the game resumed. Then Milbrett proved she was ready to contribute by putting the USA up 2-0 in the 34th minute. China’s Wang Liping cut the lead to 2-1 by beating her future WUSA teammate, Briana Scurry, seven minutes before halftime. Hamm made it 3-1 in the 51st minute, and it appeared the USA would survive the difficult day. China, however, scored two late goals to escape with a 3-3 draw.
Akers slept for 24 straight hours. “I had never seen anything like it,” said Amanda Cromwell, Michelle’s roommate in Sweden. “I was devastated for her.” When she finally woke up, Michelle found stuffed animals, notes, and cards all over her bed and even on top of her. Her teammates had written notes of encouragement and also messages expressing their admiration for her. “I was overwhelmed,” Michelle said, admitting that she had been unaware of what her teammates thought of her until then. “I talked to April about it, and I’ll always remember what she said— ‘Maybe it takes someone to be knocked down before others feel like they can tell them how they really feel.’ I’ll never forget that.”

While Milbrett scored after Akers’ injury, she was still stressed about the situation in which she found herself. She expected to see some playing time, but mostly coming off the bench to rest Akers or Gabarra in games that had already been decided. “Her injury scared the heck out of all of us,” Milbrett said. “Personally, I was very scared. Because of her injury, I was playing far sooner than I or anyone had expected. But Michelle helped me a lot more than she knew. She was just the same Mish with me, and being a rookie in my first World Cup, it helped knowing that however I played, she would always be consistent with me. I would ask questions, and she would help me, same as always. All I remember is that through all her hell and all her pain, she displayed complete strength. Support for the team was her first concern. Her injury knocked the wind out of the whole team, but that’s nothing compared to what it did to Michelle. She had worked so hard for so long just to be able to play in the World Cup, and it all came crashing down.”

It took nine minutes for the USA to score against Denmark in their second match of the World Cup. Playing without Akers gave the U.S. extra incentive to get the job done quickly and efficiently. Kristine Lilly got the team started strong. Milbrett got her second goal of the tournament four minutes into the second half, and this time the USA held onto the lead and walked away with a morale-boosting 2-0 win. The win, however, was not without tension. With a comfortable 2-0 lead in the second half, Tony DiCicco set out to give some players a rest. He replaced Linda Hamilton and her ailing knees with the young, speedy Thori Staples in the 53rd minute, and inserted Debbie Keller for Milbrett in the 61st. Teams were only allowed a total of three substitutions, but DiCicco wanted to rest Carin Gabarra, who was struggling with back pain. If the U.S. used its final substitution too early, they would run the risk of playing shorthanded in the event of an injury or red card. With a two-goal lead, DiCicco replaced Gabarra in the 85th minute with Sarah Rafanelli.

Coaches play out countless scenarios in their heads during the game, but it’s unlikely DiCicco, Gregg, and Heinrichs could ever have dreamed this one up. Shortly after Rafanelli entered the match, U.S. goalkeeper Briana Scurry brought the ball to the top of the penalty area to punt it. Referee Mamadouba Engage Camara blew his whistle. “I guess I stepped out of the box,” said Bri who at first couldn’t understand what the whistle was for. “The ball was already gone. The referee was already up the field. He came running back and just gave me a red card. Actually, in my opinion, what happened was is that he gave the other goalkeeper a yellow in the first half, didn’t mark down which goalkeeper he had given it to, and I think he assumed that was my second. Therefore, he just went to the red and tossed me out. And they got the subsequent free kick right there outside the box.”

The U.S. was suddenly reduced to 10 players, facing a free kick from 19 yards, and their goalkeeper had just been kicked out of the game. To make matters worse, they could not put their backup keeper, Saskia Webber, into the match because they had used all their allotted subs. A field player would have to finish the game in goal. “They called me over to the bench and said, ‘We need you to go in goal,’” said Mia Hamm. “I said, ‘What about a real goalkeeper?’ So I put on Bri’s jersey and gloves, which were a bit too big.”

If Hamm thought the gloves were big, she was shocked when she got into the goal. “When you are shooting at it, the goal seems tiny,” she says. “But once you are it in, it’s huge. I mean huge! Right away, I had to face a direct free kick 19 yards away. Denmark had this girl who could really strike a ball, and Carla said I was hiding behind the wall. I asked Bri never to do that again. She promised she wouldn’t.”
Previously, her career as a goalkeeper had been limited to practice. “Tish and I would mess around in practice whenever we did this one particular drill,” she said. “Bri and Saskia would give us their gloves, and we’d fly around and try to save balls. It was a little different in the game. But I made a couple saves. One was a cross. It was one of those plays where the defender doesn’t want to give up a corner kick, so Tish let the girl cross it. Then she remembered that I was in goal. She felt so bad. I had to do a front smother, and it started squeaking out under my arm. I took all the goal kicks and the punts were okay, not like Bri can hit them. It’s just one of those things that you are glad turned out the way it did. The fact that we were up 2-0 with only about five minutes left definitely took some of pressure off me.”

After the Mia-in-goal incident, the U.S. began training emergency goalkeepers—just in case. “I think the rules have changed, but we didn’t have a jersey with my name on it,” said Mia. “I actually wore Bri’s jersey. In the 2003 World Cup, I think there were three or four of us that actually had keeper jerseys. I had one, I think Cindy (Parlow) had one. We actually had a practice one day with all the potential goalkeepers.”

As winners of Group C, the USA advanced to the quarterfinals, where they would meet Japan. Lilly scored in the ninth minute, then again in the 42nd minute. Milbrett made it 3-0 before halftime and Tisha Venturini added a fourth 10 minutes before the final whistle. Even without Akers, the U.S. was playing well. Since the 3-3 draw with China in the opening match, they had outscored their three opponents 10-1. Meanwhile, Akers was working furiously to get back for the semifinal or final. After her injury, the team began writing #10 or “Mufasa” on their sock tape. In the team huddle before the Denmark game, Carla Overbeck told the team, “If you get tired out there, I want you to look over at Michelle. She never gives up, and we won’t either.”

Akers never felt closer to her teammates, and it drove her to work even harder to get back on the field. The remnants of her concussion were gone, but the knee was far from healed. She worked her knee to the point where she would be able to play against Norway in the semifinals. But in the days preceding the match, she was wary of how much she could contribute. Norway went up early on a header by Ann Kristin Aarones, another future WUSA player. The U.S. spent most of the remaining time pushing for a goal that never came, but they came agonizingly close when Joy Fawcett rung two shots off the crossbar, and shots by Venturini and Milbrett where tipped over the bar by Norwegian goalkeeper Bente Nordby.

“When Michelle went down in that first game, I think we were able to hold it together for a couple of games, but after that we struggled,” explained Mia Hamm. “Going into the Norway game, we wanted to have our best player on the field. Michelle stepped on the field, and it was almost like we said, ‘Okay, you’re here now. You have to do everything for us.’ She was playing with a torn MCL. She could barely run or cut. In the first half, in some way, we expected her to lead like she always did. She just couldn’t do it physically. In the second half, it was almost too late. We said, ‘Look, we’ve been playing well without her up to this point because we’ve had to. Everyone can continue to do so.’ We just didn’t get our breaks.”

Purchase It’s Not the Glory today!

Rampone returns to USWNT ahead of Japan friendlies
Going for Gold: USWNT players prepare for Olympics in NWSL