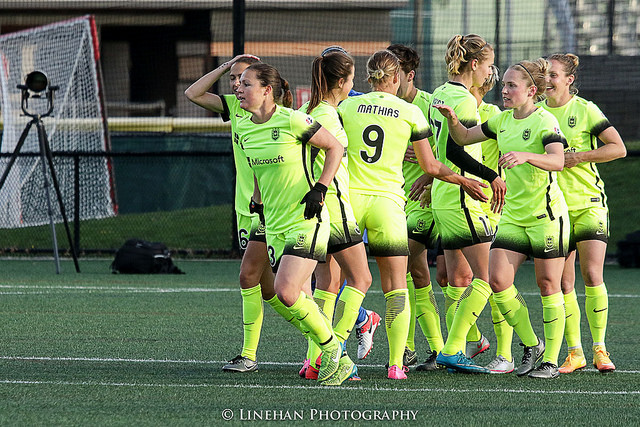 Seattle Reign FC was fined an undisclosed amount after coach Laura Harvey criticized a match official and the team sent out an ill-advised press release. (Photo Copyright Clark Linehan for The Equalizer)

[LAULETTA: Jen Buczkowski, the NWSL’s ironwoman, hangs up her cleats]

But the NWSL’s press release notes that the fine comes for comments from Harvey “and the club,” which likely references the team’s press release which went out to media. It read:

“As the game progressed it became increasingly physical. The referee apparently suffered from a strange form of paralysis that prevented him from pulling a yellow card from his pocket until late in the game, despite a plethora of bodies in blue that littered the field.”

Harvey was more constructive in her criticisms.

“It was ridiculous,” Harvey said postgame. “I thought the ref lost control of the game, and I think everyone should look at Bev Goebel’s face. You know, and I’m not saying that anyone went out to hurt anybody, but the reality is that when the referee doesn’t get hold of the game, like he didn’t, someone was going to get hurt. And I kept saying it to the fourth official, and I’m not saying it would have been one of our players or their players, but in rivalry games, when a referee doesn’t get hold of the game, things like that happen.

The Thorns were physical throughout the match but hardly dirty. There were a few late challenges, including one by Meg Morris on Kim Little, which went uncautioned by Kreitzer. Morris was eventually given a yellow card in the 90th minute, four minutes after Lindsey Horan was booked for pulling Little’s arm to prevent a counterattack.

[CURREN: NWSL Week in Review: Our kingdom for some goals]

Harvey’s comments about the officiating are likely her way of making sure the rematch between the two teams on May 29 in Portland is a more closely officiated match. Portland’s strategy was, by all means, to play physically.

Thorns coach Mark Parsons had no comment on officials when asked postgame.

“All fines collected by the NWSL will be donated to the U.S. Soccer Foundation, the exclusive charitable partner of the league,” according to the NWSL’s statement. A league spokesperson noted that there is an internal review of referees after each match:

“Teams are provided with a form by the league to confidentially evaluate an official’s performance following every match, which is sent to the League office and Professional Referee Organization. Feedback about referee performance is encouraged through proper channels.”

The Lowdown: Jen Buczkowski, the ironwoman of NWSL
Rampone returns to USWNT ahead of Japan friendlies