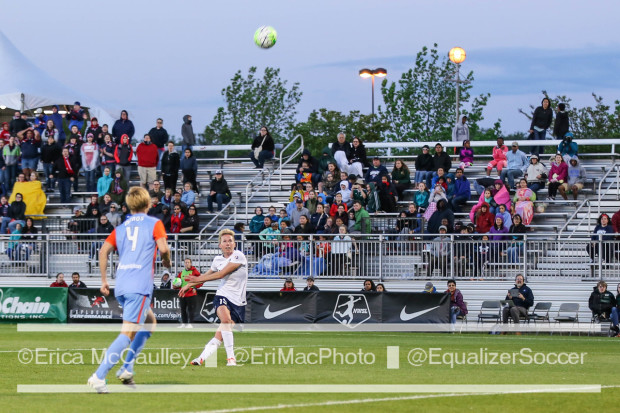 Goalscorer Joanna Lohman watches a ball as it sails over the head of Rebecca Moros. (photo copyright EriMac Photo for The Equalizer)

BOYDS, MD. — The Washington Spirit remained undefeated Saturday, narrowly beating the visiting Houston Dash 1-0 on a first half goal by Joanna Lohman. The win gave the Spirit it’s fourth shutout of the season and dropped the Dash down to sixth in the standings.

Unlike last week, the major talking points from this game are all directly related to action on the pitch. Here’s a look at some of the storylines of Saturday’s affair.

Joanna Lohman: Pundits analyze the information available and make the best predictions they can, but often the game unfolds in an entirely different way than anticipated. Lohman, who has scored the only two goals at the Soccerplex so far this season is a prime example of this. Few would have guessed that through five games Lohman would have two game winning goals, while the league’s reigning MVP would be goalless.

“Who thought she’d be playing 90 minutes every game and scoring two game winning goals?” Gabarra said about Lohman while discussing squad selections Saturday, “ You can’t predict it. You’ve just got to hopefully make the right selections and the players have been validating my selections…”

While it’s the goals that garner the most attention, Lohman’s tireless performances in the middle of the park are also noteworthy. Her work on both sides of the ball has been key in the Spirit managing 13 points out of a possible 15. At 33 years old, Lohman is off to the best start of her career so far.

Just four years ago, Lohman was playing at the Soccerplex alongside mainly collegiate players and even some teenagers for the DC United Women after WPS folded. When asked if she could have predicted this, the Maryland native honestly answered that she wouldn’t have. She answered that she always played each game to survive another week. Right now, she’s doing much more than surviving.

“Jo is a workhorse,” Dunn said about Lohman, “Ever since she’s been on the team, she’s been nothing but energy and it’s just incredible. I mean at her age, she’s outrunning everybody and I’m trying to keep up with her.”

Roccaro’s First Full Game: Imagine drawing stopping Crystal Dunn as your first assignment as a starter. It was a daunting task for anyone let alone someone only roughly five months removed from a major surgery. For her part, Roccaro didn’t look like someone coming off of a labral tear and a sports hernia. The Notre Dame product certainly made made life difficult for her former U-20 teammate and the rest of the Washington Spirit.

“I was a little nervous going in especially knowing I was defending Crystal Dunn and the Washington Spirit but I think once game started, I kind of settled in right away and became my old self again,” Roccaro said about her first start.

“I think we really shut them down,” Roccaro commented on the backline’s performance, “We were organized and we had a slip up on that goal. We didn’t mark in the box and they punish you. Good teams punish you.”

Although, Houston came out on the losing side of it last night, hopefully Roccaro can help the Dash settle in at the back moving forward. The center back is certainly a major part of the club’s future plans so perhaps the quicker you can get her acclimated the better. Next week won’t be any easier for the rookie as the Dash will face off against the Orlando Pride and the deadly Alex Morgan. Roccaro is certainly up for the challenge.

“I think throwing myself right in there, there’s no better way to do it. See where I’m at and help the team as much as I can,” Roccaro said about facing two of the potent offensive players in the league right off the bat.

The Goal: Albeit Lohman’s header that finished the play was the result of a defensive mistake, Washington’s goal Saturday was an excellent example of a team goal. The sequence started with keeper Stephanie Labbe and the ball was touched by seven other players before it connected with Lohman’s head. It was a great team goal especially given the wind which played a factor all evening. It was essentially death by a thousand cuts for the Dash backline.

What comprises a ‘good goal’ is of course subjective. Generally, it’s a cheeky finish or a long distance rocket that grabs audiences’ attention and win awards. While those type of goals are exciting and newsworthy, fans should also take note of the goal scored at the Soccerplex Saturday night. Lohman’s tally on Saturday is the byproduct of a team that’s in sync. In short, that goal might be Exhibit A of why the Spirit is sitting atop the table.

Last season, the Spirit relied heavily on Dunn to generate scoring opportunities and carry the team offensively. As Saturday night’s goal shows, the entire team is now involved in the process. Teams may stop Dunn this season but that doesn’t mean they’ll necessarily win. That wasn’t the case in 2015.

Thorns remain undefeated with 1-1 tie against rival Seattle
NWSL Week In Review: Our kingdom for some goals