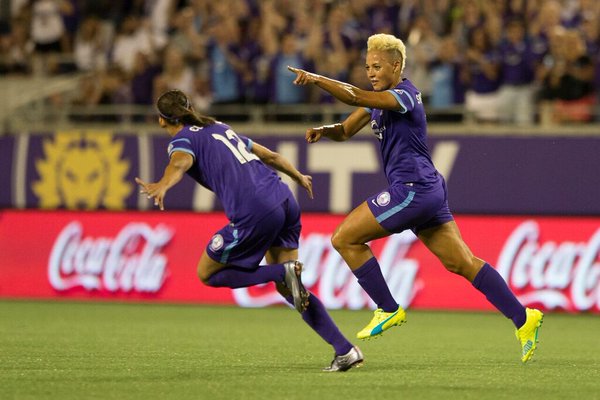 The Orlando Pride made it two-for-two at home with a 2-0 victory over Shield holders, Seattle Reign FC. Sarah Hagen scored early in the match and Lianne Sanderson added an insurance tally in the closing minutes. The clean sheet, credited to Ashlyn Harris, was the first in the brief history of the Pride.

The Pride went on top in the 11th minute after Laura Alleway hit a majestic long ball that found Alex Morgan splitting Reign defenders to run it down in the left corner. Morgan then sent a perfect cross to the far post where Hagen split the other two Reign defenders and finished with her head to make it 1-0. It was Hagen’s first goal in a Pride kit.

Tom Sermanni’s group had numerous chances to double the lead but were unable to break through, largely due to an excellent match by Hope Solo. She made a great stop on Alex Morgan, a great read to punch a ball away from Morgan’s reach, and a great recovery to reach back and grab a ball that nearly had her beat off a sun-shielded corner kick.

Still within reach, the Reign had their only significant chance of the night in the 82nd minute after Lindsay Elston’s pass went off Alleway to Bev Yanez who looped in a shot toward an aggressively positioned Harris. The keeper was able to leap up and deflect the ball off the crossbar. A juicy rebound bounced to Michelle Cruz but she skied it well over the goal.

Harris stayed down after a collision with Cruz and shortly after she got up the Pride struck again, this time in the 86th minute. Kaylyn Kyle sent a long ball down the right side that looked like it would be won back by Lauren Barnes. But Morgan stuck with the play and when Barnes went down, had a free look at Solo. Solo made another top-shelf save but Sanderson followed the play and scored the rebound, her second of the season.

The Reign also had to replace Kendall Fletcher in the second half after she took an injury to what appeared to be her right leg.

Both teams exit the match 2-2-0 (6 points) and part of a three-way tie for fifth place with the Flash. Both teams are back in action on Saturday. The Pride host the Flash while the Reign host the Thorns in the first Cascadia Derby match of 2016.