Gordon: Thoughts from the nil-nil draw in Washington 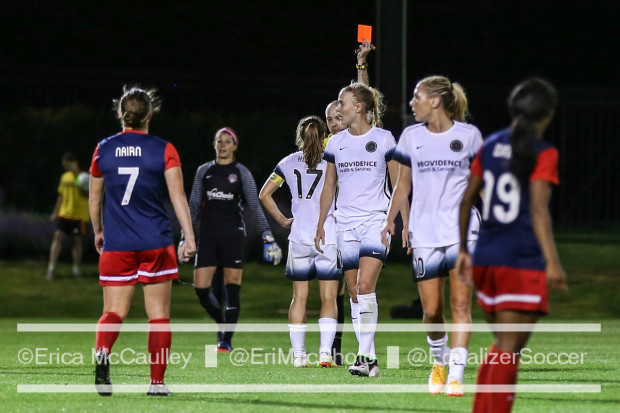 Portland’s Tobin Heath (# 17) gets shown a red card late in Saturday’s 0-0 draw against the Spirit. (photo copyright EriMacPhoto for The Equalizer)

The Washington Spirit and the Portland Thorns battled it out to a 0-0 draw Saturday night at the Maryland Soccerplex. There are two kinds of scoreless draws, the snooze fests and the kind that have fans on the edge of their seats throughout. Saturday night’s clash would definitely fall under the latter category.

Although there were no goals, there’s a lot to take away from the first meeting between these two sides, who were sitting one and two respectively in standings heading into the match.

Clean sheets: Albeit it wasn’t a spotless performance by either defensive unit, both sides did walk away with clean sheets which is impressive given the attacking talent on the field last night.

The Thorns looked like they might crack especially in the first half and again after Tobin Heath was sent off. With the player advantage, the Spirit came close to breaking the deadlock on three separate occasions in stoppage time but came up empty. The Thorns, who will wrap up a four game road trip next weekend in Seattle, managed to keep the Spirit, the league’s most potent offense statistically coming into this match, at bay. That’s impressive especially considering how thin the defensive corp was coming into the weekend.

Besides the suspension of arguably the league’s best player at present (Heath) for next week, perhaps being the only team so far this season to stop the Spirit offense will galvanize the Thorns heading into next week’s pivotal matchup against the Seattle Reign. Walking away with a point against the Spirit in the middle of a four-game away stretch is definitely positive.

From the Spirit’s perspective, Saturday was the third time in four games they held their opponent scoreless. Historically the past few seasons, Washington’s been a club that’s known for giving up soft goals and giving up almost as many goals as it scores. To put things in perspective, last year the Spirit had to play over half a season to secure as many shutouts.

At times it wasn’t pretty. For example, there was chaos in the first half that caused Labbe to have to come out and make several saves. Nonetheless, the team seems better organized and even when the Thorns enjoyed the majority of possession in the second half, the Spirit did well to keep the amount of opportunities generated low.

“All through preseason this was a tough bunch of girls and they never made anything easy for me in training,” Dunn said about her team’s defense so far this season. “I’m super excited about it. Being a defender myself, I know clean sheets are definitely something to be proud of.”

While the backline certainly deserves credit, the team is defending well all over the field. Especially during the first half last night, constant pressure from attacking players helped stymie the Portland attack.

Tobin Heath sees Red: Perhaps the most apt description of Tobin Heath’s form as of late is that the only person that can stop Heath is herself – literally. Last night, the league’s reigning Player of the Month displayed the fancy footwork and table-setting abilities that have led Portland to an undefeated record through four matches.

In two separate instances, the Portland captain’s poor judgment drew cards from the referee and she will now have to sit out a rivalry match against the ever dangerous Seattle Reign. What makes this suspension hard to stomach for fans though, is that it was entirely avoidable. It wasn’t that she mistimed a tackle or that she inadvertently tripped someone. The actions that led to the red on yellow card accumulation were completely of her own volition.

First, in the 59th minute Heath earned a yellow for encroachment on a Spirit free kick. She clearly wasn’t ten yards from the spot of the foul and jumped to block the kick. Earning a yellow card on that type of play happens fairly frequently and is somewhat understandable in a tight game that felt it would be decided by some seemingly small play.

The second card came after Heath was called for a foul on Megan Oyster. Frustrated by the call and what had been a hotly contested match physically, Heath spiked the ball into ground. It was not a wise reaction for a player already sitting on a yellow. For a player that’s shown a lot of maturity both and off the field this season, it’s seems like a step in the wrong direction. This unfortunate event does provide the 27-year-old an opportunity to continue that maturation process both as a player and captain.

Post game, Portland defender Meghan Klingenberg gave an interesting take on the physicality of the match and the display by Heath that earned her the second yellow.

“I freaking love it. That means people are invested in this league and invested in this game and invested in their club and that’s how it should be. Unfortunately, I wish we could have reined it in just a little bit so we could have Tobin for next game but at the same time she’s our captain and seeing her light up on the field and get fired up that makes everybody else work that much harder and I think it’s great. I see nothing wrong with that as long as there’s not dirty tackles, as long as there’s not bad fouls.”

Best Performance of the Season So Far: Washington put in its best performance so far this season but ironically dropped points for the first time. Head coach Jim Gabarra mixed things up a bit offensively, starting Estefani Banini and Cali Farquharson for the first time this season. Banini showcased her South American flare and Farquharson made good decisions with the ball when she was able to get on it.

In the opening half, the combination play between Dunn, Banini and Diana Matheson definitely had the Thorns’ backline under pressure. Dunn was the most dangerous she’s been all season. She was able to find space to run at the Thorns’ defense and nearly opened her account twice – once on the goal that was called offsides and another that hit off the post in stoppage.

Coming into this game, just how good the league’s leading team is was up for debate based on the opponents faced to that point. Last night, the Spirit proved that although the team got some lucky bounces in Western New York, this team is primed and ready to compete for a championship.