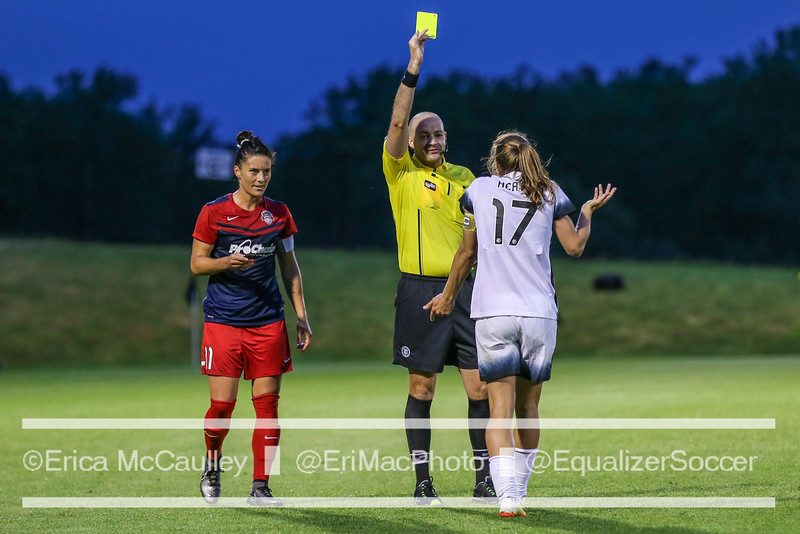 Tobin Heath was sent off in Portland’s scoreless draw against Washington. (Photo copyright EriMacPhoto for The Equalizer)

A crowd of 4,333 was on hand at the Maryland Soccer Plex on Saturday night to witness a lively but scoreless draw between the Washington Spirit and Portland Thorns.

Crystal Dunn — still scoreless this season — headed a cross from Ali Kreiger into the back of Portland’s net in the 35th minute, but it was called offside. Dunn may be scoreless, but she has provided assists on three of the Spirit’s six goals so far this season, and is playing as dangerous as ever.

Tobin Heath, who was awarded the NWSL Player of the Month honor for April this week, was cautioned in the first half for encroachment. Already on one yellow, Heath was called for a foul in the 88th minute, and, in a moment of frustration, picked up the ball and spiked it into the ground. The ref subsequently called Heath over and gave her a second yellow, and she was sent off.

Our Game Magazine posted video of the incident:

Heath will miss next Saturday’s Thorns-Reign clash in Seattle, as she will have to serve a one game suspension for the red card.

With the Thorns down to ten players, the Spirit had two great chances to win the game in injury time, a shot from Dunn that hit the post and one from Nairn that sailed over the net. The Spirit could not capitalize on their late pressure, and the game ended scoreless.

Next up for the Thorns is a trip to Seattle on Saturday, while the Spirit will host the Houston Dash.