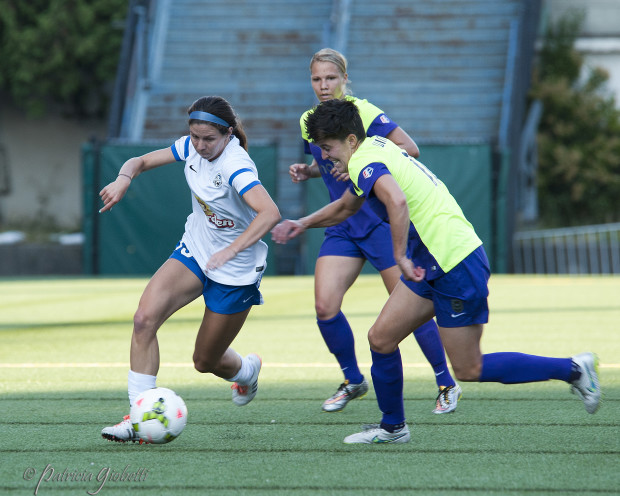 The Reign have won two straight Shields but FC Kansas City has bested them twice in the NWSL Championship. (Photo Copyright Patricia Giobetti for The Equalizer)

Week 3 features the first Friday night games of the season and the home opener for the Flash, who take their usual place as the final NWSL club to play in front of the home fans. The weekend closes with a rematch of the last two NWSL Championships.

What to watch for: The Flash play their usual late home opener on the brand new Sahlen’s Stadium pitch against the league-leading Spirit. The match features the two keepers battling for the starting nod when Canada gets to the Olympic games. The Flash’s Sabrina D’Angelo and the Spirit’s Stephanie Labbe have both allowed just a single goal over two league matches this season. To keep it up D’Angelo and the Flash defense will have to hold off Crystal Dunn who is without a goal but has two assists and some near misses last week at Sky Blue. On the flipside the Flash have still yet to score in the run of play this season. Jaelene Hinkle’s fractured toe has her listed as questionable. Also questionable is Jess McDonald (knee) who has appeared in 46 consecutive league matches.

What to watch for: The Dash begin life without Carli Lloyd, who is out up to six weeks with an MCL sprain. The club is deeper than ever before though and will still be able to run out an attack-minded lineup led by Andressa and rookie Rachel Daly. Sky Blue crashed to earth a bit against the Spirit after their shockingly wonderful, season-opening win in Seattle. Both teams are likely to run out of a 4-3-3 shape which should leave plenty of room to operate in the middle of the park. The midfield tandem of Raquel Rodriguez and Sarah Killion and the left-sided presence of Kelley O’Hara figure to be key for Sky Blue. The Dash will try to make life difficult on a Sky Blue defense that starts a rookie keeper and two rookie defenders.

What to watch for: It has been a slow start for the new look Breakers who have opened the Matt Beard regime with 180 minutes of scoreless soccer—after three seasons of never being shutout in consecutive matches. Against the Reign their back line was not nearly quick enough moving the ball which played right into the counterattack. They’ll need to be better against the Thorns who boast Lindsey Horan and Tobin Heath, both off to torrid starts to the new season. The Thorns will likely have to make some adjustments in their own defense though after Kat Williamson went off with a knee injury last week.

What to watch for: Both sides were much better in Week 2 wins than Week 1 losses and will now be looking to cultivate win streaks early in the season. For the Pride defense it will be an opportunity to try and slow down Christen Press, arguably the most difficult striker in NWSL to contain. Offensively the Pride become a better side when Lianne Sanderson checks in so if she is still not ready to start, the game plan could well be to manage the midfield until the time comes for her to sub in.

What to watch for: A rematch of the last two NWSL Championships—both won by Kansas City—has both teams looking a bit different. The holders are still trying to adjust to life without Lauren Holiday, Amy Rodriguez, and others while the Reign began the season with Megan Rapinoe injured and last week lost Jess Fishlock to a broken leg. The first two games have been a mixed bag for both teams with flashes of the sides that have won trophies tied in with some clear rust. So how will this one play out? The Reign will be looking to find a way around Jen Buczkowski and Desiree Scott, reunited this season in the Kansas City midfield. The Blues will need someone to hold up possession and be dangerous up top with Shea Groom serving a one-game, red card suspension.

note that stream links are subject to change; please consult nwslsoccer.com for the most up-to-date information