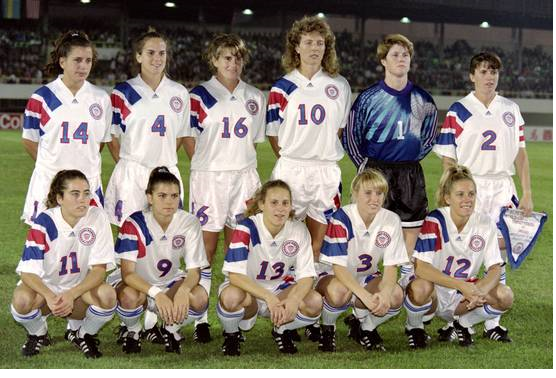 The United States won the inaugural Women’s World Cup in 1991. Little has been the same since.

For U.S. Soccer, the best and the worst of all possibilities played out at the same time 25 years ago in China. A quarter of a century ago, their six-year-old women’s program won the World Cup. In one amazing two-week period on the other side of the world, a monster was created. A least one person at the U.S. Soccer Federation must have thought about the future and asked, “What in the world are we going to do now?”

That’s when it all started to change. That’s when the USSF grabbed the attention of the soccer-playing world, and as a result found itself in a position of leadership. Think about it this way. Imagine you are one of the leaders of an “established” soccer nation, one with a proud tradition of success, a storied history of being among the elite countries in the world, a Germany or a Brazil, or an Italy. Think for a moment about your coveted status as the expert in the world’s game.

Then along comes this Women’s World Cup, the first ever. Your country qualifies because your players are elite. They are elite because they’re from your country and because you say so. Your expectations are high, and you can’t really imagine not winning this thing, but you’ll settle for reaching the final. You look at your World Cup schedule and see the United States of America, and you skip right past them because this is soccer and they are the USA. No problem. They can’t be any good, you say.

You probably thought so little of the U.S. women that you didn’t bother to notice they blew through CONCACAF qualifying by outscoring their five opponents 49-0, behind players whose names were constantly mispronounced, players like Michelle Akers-Stahl, April Heinrichs and Carin Gabarra, the trio that would go on to score 20 goals in the seven-game 1991 World Cup.

We all know what happened next. The U.S. not only won the World Cup, they did it with flair, passion and confidence. And the sight of them on the platform in China hoisting the World Cup? Well that was too much for other countries to stomach. Lauren Gregg, the assistant coach for the U.S. women from 1987 to 2000, said it “was like a nagging toothache for the rest of the world.” Countries now had to invest in their women’s program to defeat the USA.

All of a sudden, instead of scrambling to try to catch up to the rest of the world, U.S. Soccer was in the unfamiliar position of trying lead and stay on top. At the time, the USSF was a long way from being flush with cash. It would be three years until the 1994 Men’s World Cup generated enough revenue to give the Federation some significant financial breathing room.

So after 1991, U.S. Soccer, an organization with little money and even less respect from elite soccer countries, had a program that in at least some quarters, brought them much-desired attention. And at that time, the players were just happy to be playing. As time went on, players like Julie Foudy, Kristine Lilly, Mia Hamm and Michelle Akers grew weary of losing money when they represented their country. And they were quickly running out of restaurant managers who would accept “Gotta go away for a month,” as a good enough excuse to be able to return to their jobs waiting tables.

Then the negotiating began, and it has never really ended. That’s where we are today. On one hand, U.S. Soccer can accurately say they have led the way in women’s soccer. It’s safe to say the USA has played more international matches that any other women’s team, even the Scandinavian countries who started 10 years earlier.

Some of what has been implemented in the U.S. has forced other nations to comply, catch-up, or whatever word fits. We can all agree that subsidizing salaries in the NWSL has helped the league, a crucial piece in the developmental puzzle, survive. Health insurance, nannies for players with young children, and other benefits are in place now. That’s great. US Soccer should be proud of what has been accomplished.

Progress, however, has not come without conflict, threats, lockouts, strikes and ill will. Yes, we all know U.S. Soccer needs to be run like a business, and there are some smart people doing that. U.S. Soccer is today as close to a model federation as there is in soccer, and thanks to our Attorney General we have learned a lot about federations around the world.

Here’s the thing, though. U.S. Soccer, consciously or not, seems to treat the women’s national team like an outreach program, like another part of a huge governing body that needs funding. There are two marquee programs, not one.

How much has really changed since 1998? In late May of that year, a press conference was held at RFK Stadium in Washington, D.C. The women would play New Zealand the following day as part of a doubleheader with the men playing Scotland. The press conference was to announce a large-scale effort on the men’s side called Project 2010. The plan called for the men to win the 2010 World Cup. Then on the last page of the presentation was something called Project Gold, which was the long-range plan for the women’s team. The crux of the plan — and as plans go it was, well, lacking — was for the women to “keep winning.”

And they did. There has never been a World Cup in which the Americans did not walk away with a medal, and four times in five Olympics, the USA has won gold. Now it’s apparent they are not compensated fairly, let alone equally.

If progress is going to be made, the first step is to change how the women’s national team is perceived within the federation. Unlike the players on the 1991 team, most of whose grandmothers did not have the right to vote, women today hold a powerful and widely accepted place in society, and the national team plays an increasingly important part in society.

It’s best to use words like “important” instead of valuable, if for no other reason than someone will have to be tasked with the job of assigning value. And what criteria is used to determine the value of a player or a team? And who decided that? It is also ill-advised to use results or accomplishments in the argument because while the women can point to an unequaled past and an extremely solid present, the big picture is missed if the future is not the primary concern.

But now there are two new words in play — fair and equal — and they aren’t just mentioned in soccer conversations. Let’s face it, in a room shared by lawyers, accountants, bosses and employees, it’s not easy to determine what is fair and equal. A week will probably be spent defining those two words. But here is what we know: good enough is no longer good enough. It seems that it’s time again for U.S. Soccer to take a leadership role.