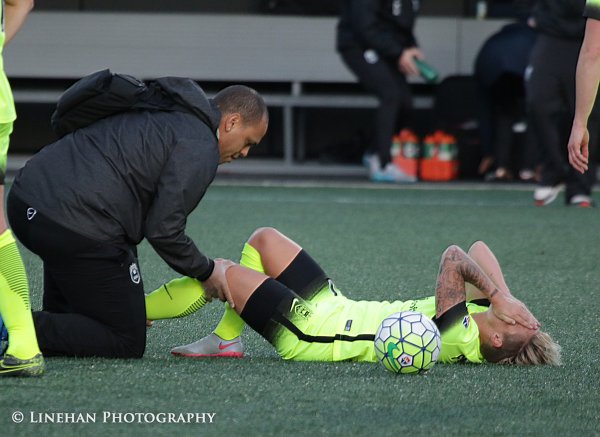 Seattle Reign FC midfielder Jess Fishlock is out 4-6 weeks with a fractured left tibia, the team announced on Thursday.

Fishlock went down in the 29th minute of Seattle’s 3-0 road win over the Boston Breakers on Sunday. Her legs became entangled with Boston midfielder McCall Zerboni when Fishlock challenged for the ball. Fishlock tried to play through the injury but she was substituted off the field in the 41st minute, after Seattle scored its second goal of the match.

The injury is a tough blow for Seattle, but there’s a recognition from the club that it could have been a lot worse.

“Our first fears with Jess’s injury were that she could be out longer,” said Reign FC head coach Laura Harvey. “We know she is fighter and will be back on the pitch as soon as she can. She is a true professional and will be working 24/7 to get herself back fit and healthy.”

Fishlock has been named to the NWSL Best XI in each of the first three years of the league’s existence. She has been an integral part to Reign FC claiming back-to-back NWSL Shields.

The Lowdown: Taking in Orlando’s soccer culture
Sauerbrunn, Lloyd up for BBC World Player of the Year