Familiar but unfamiliar: Group F will be tricky in Rio

Canada could find Group F to be very tricky at the Rio 2016 Olympics. (Photo: Canada Soccer)

VANCOUVER, British Columbia – Commencement of celebrations on Wednesday to mark 100 days until the 2016 Rio Olympics are a stark reminder: the Games are coming — quickly.

The women’s soccer tournament begins two days ahead of the Opening Ceremony, and all three groups in the competition are at least three-deep in quality teams.

The top two teams will advance from the three groups of four in the women’s Olympic tournament, with the two best third-place finishers also carrying on. Group F features Germany, Australia, Canada and Zimbabwe. All three 2015 World Cup participants from Group F could easily go on an early run and top that group, while Zimbabwe will likely use the Olympics as an opportunity to gain big-tournament experience.

“All the groups are difficult, honestly,” Canada defender Rhian Wilkinson said. “When you think about it, there’s 12 teams so there’s no easy groups. Ours is a tough one like all the other ones are. Everyone’s looking for a group of death, but for me they really seem quite equal.”

Canada’s first match will be against Australia. The Matildas have quickly been making a name for themselves as a team that’s on the rise. A fantastic World Cup saw them finish second in Group D behind the U.S. A round-of-sixteen win over Brazil set up a quarterfinals match with Japan that resulted in narrow 1-o loss. Boston Breakers forward Kyah Simon couldn’t be more excited about the Olympics.

“Yeah, I mean, obviously very excited when the draw was happening,” said Simon. “No matter what group you’re in it’s going to be tough. I’m very much looking forward to the opportunity and challenge. I think it’s a great group to be drawn in. I’m excited to get back with the national team and get back working with the national team. I can’t wait to get back with the girls and to work on the things we need to do. I think we’re a team at the moment that’s more confident than ever. It’s going to be a real test for our character and what we’re made of. I do believe we’re up for the challenge.”

The progress that Australia has made is vast and they could very well be a strong dark-horse to pick up a medal at the Rio Olympics. The 24-year-old Simon earned her first senior cap at the age of 16. She has seen a lot of ups and downs with Australia and is glad her country is finally getting proper recognition as a football nation that people are starting to see as a top team.

“I think definitely think we made our mark in the World Cup last year and teams are finally noticing the Matildas on the world stage,” said Simon. “I’ve been on the team for eight years and have seen how the teams progressed. We’ve always had talent, coaching, a good structure, and a good philosophy and I think that’s all contributed. It’s nice to see Australia as a team that people are looking out for.”

Canada and Australia could be looking up at potential Rio Olympic favorite in Germany. If they aren’t able to steal points off of Silvia’s Neid’s squad, then the Canada-Australia match could be the decider for second spot. Germany will open up against Zimbabwe and Germany striker Anja Mittag admits that she doesn’t quite know very much about the Zimbabweans.

With the retirements of Nadine Angerer, Celia Sasic, and most recently, Nadine Keßler, could that mean a weaker, more vulnerable Germany?

“Oh, I wouldn’t say so,” said a confident Mittag. “Angerer and Sasic we knew since last summer and now we have a lot of time to prepare and find ourselves. I think we have a lot of younger players that have to find their footsteps. Of course we will see how we manage in a big, big tournament. It’s different, but I think we will be prepared.” 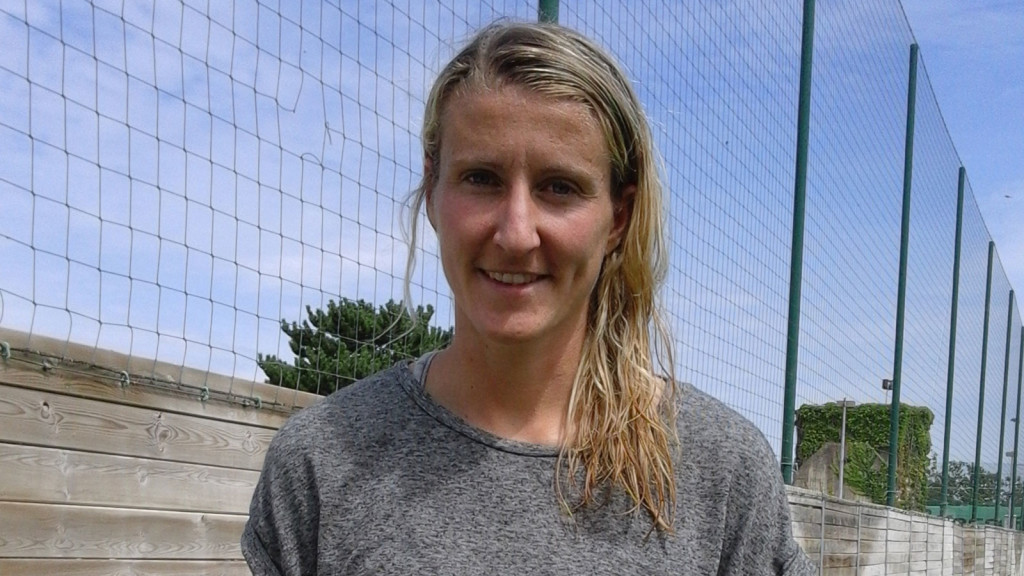 Anja Mittag knows Germany is a favorite in Rio. (Photo Copyright Harjeet Johal for The Equalizer)

Center back Kadeisha Buchanan will most likely be tasked to play a big role in shutting down Mittag, Alexandra Popp and Dzsenifer Marozsán when Canada play Germany on August 9, in Brasilia.

“Although they are key players,” admitted Buchanan, “I feel like their development and in general, Germany is always a strong team. I think when you lose such star players, the other players step up tremendously. It will be a different team that we normally face, but with scouting and just getting your details on those players, I think it will be a normal match, Canada vs. Germany.”

With Germany considered one of the favorites to win gold at Rio, there’s no getting around the magnitude of that match.

“I mean we’re ranked in second place in the world rankings. I think we belong as one of the favourites. In a way, I think so. We are a really good team. I think a lot of teams see us also as a favorite.”

The last encounter between Canada and Australia took place eight years ago in Sydney, Australia. Kara Lang was the lone goal-scorer for a Canadian roster that featured Christine Sinclair, Melissa Tancredi, Sophie Schmidt and Rhian Wilkinson. Simon was a second-half substitute in that match and she reckons that Australia will be treating Canada as any other opponent on August 6, in São Paulo.

“We’ve not had too many games against Canada,” Simon said. “We’re approaching it as any other team. They’re generally competitive, so it should be a good one. There a quality side and I definitely have confidence in our side.”

The unknown mystery from Group F is what to expect from a Zimbabwe team that’s quite unfamiliar to many people that follow women’s soccer. Not only do fans and media have research to do, but so do coaches and players. Zimbabwe might be a match that looks like an easy three points, but it could be tricky for opponents to know exactly what they are going up against.

“I can’t tell you anything about Zimbabwe and that’s the challenge,” said Wilkinson. “A lot of African teams show up with incredible athleticism, and real desire, and heart to represent their country. You can’t really prepare for them because you haven’t seen them play. They’re the unexpected.”

“It’s definitely hard to find media and footage on those teams,” said Buchanan.”You always have to give them credit where credit is due. They made it to the Olympics, so they definitely have some dangerous players, probably. You can’t underestimate teams like those.”

Playing in a World Cup is what every football player dreams of being able to do one day. The expanding of last year’s edition meant that more countries had the opportunity to compete and grow the sport back home. While the World Cup has 24 participants, the Rio Olympic tournament will only have 12 teams. The roster size is also reduced and the rest period between matches is shorter. The World Cup may seem like the clear choice as the tougher tournament to win, but if you look deeper, that’s not necessarilythe case.

“I think it doesn’t matter, both of them are really tough to win or make it to the top four”, revealed Anja Mittag. “It’s a long way you have to go. It’s harder to qualify for the Olympics. You have less recovery because you have just two days between the games and you travel also. I think it will be really hot in Brazil as well. There are other circumstances than in the World Cup last year. That’s why we have to prepare for this tournament. We are less players, we just have 18 players instead of 23. It’s different.”

Buchanan and Simon will both be making their Olympic debuts if respectively named to the Canadian and Australian rosters. Although each player is still considered to be on the younger side, they both have been an integral part of a their national team. Buchanan remembers what she enjoyed while watching Canada on television as they won bronze at the 2012 London Olympics.

“Definitely the atmosphere and for me just working hard to inspire a nation like our last Olympics,” she said. “I felt like they inspired me in such a away and I just want to do that for the next generation.”

This summer, Buchanan gets her turn on the Olympic stage, where even getting out of the group will be a challenge.