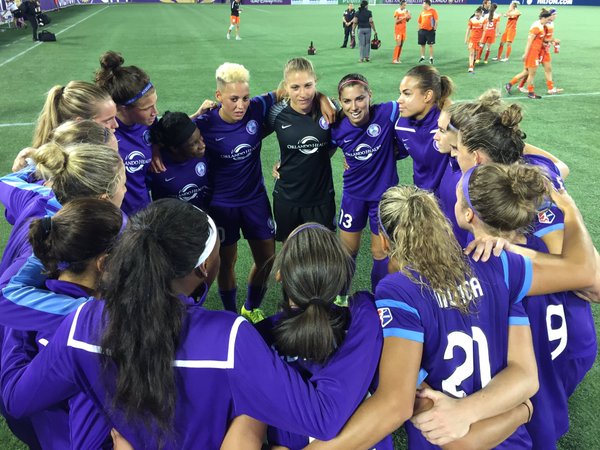 The Orlando Pride announced themselves in NWSL Saturday night with an entertaining 3-1 win over the Houston Dash, courtesy of three second half goals. 23,403 attendees filed into Orlando’s Citrus Bowl for the Pride’s home opener, enough to break the NWSL attendance record previously held by the Portland Thorns.

Houston’s Carli Lloyd was forced to leave the match after just 13 minutes with an apparent knee injury. Lloyd fell awkwardly and went down after challenging Orlando’s Laura Alleway for the ball, and was on the sidelines being checked out by trainers before the decision was made that she would not continue. Houston Dash staff said that she will undergo an MRI on her right knee.

For anyone who has asked, only info I have on Carli Lloyd so far is that she is having an MRI on her right knee, likely before leaving ORL

Lloyd tweeted a message after the match, thanking fans and confirming she will undergo an MRI:

Thank you all for the support. This won’t stop me. Will get an MRI and go from there. I will be okay.

The Dash had the best chance of the first half in the 17th minute. Janine Beckie collected the ball off of a turnover from Alleway and was in on goal alone, but Orlando keeper Ashlyn Harris came up with a massive save to deny Beckie and keep the game scoreless.

But Orlando took the lead just 20 seconds into the 2nd half, when a shot from Alex Morgan — one that was on its way wide — deflected off of Andressa into Houston’s goal.

Orlando kept the pressure on, and added two more goals shortly afterwards. A quick restart in the 56th minute caught Houston off guard, as 2nd half sub Lianne Sanderson hit a free kick past Houston keeper Lydia Williams while the Dash were still setting up their wall. Morgan added the third goal in the 61st minute off of a feed from Steph Catley.

Houston was able to pull just one back in the 75th minute, with a beautiful, curving strike from Andressa that beat Harris from 25 yards out.

Next up for Orlando is an away game in Chicago next Sunday, while Houston hosts Sky Blue FC on Friday.