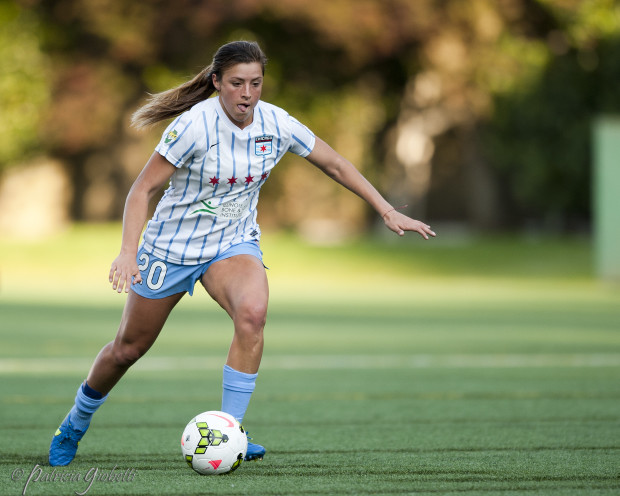 The Chicago Red Stars bounced back from a tough loss in Houston last week and defeated the visiting Western New York Flash 1-0 on Saturday night at Toyota Park.

After a strong start from WNY, the Red Stars began taking control of the match around the 15th minute of the game. Both teams struggled to get significant opportunities to score, however.

The first note-worthy chance happened in the 22nd minute when Abby Erceg headed a corner kick just over the bar. With that as a boost, just three minutes later Jessica McDonald extended her foot out to re-direct a cross from Lynn Williams towards the goal, but goalkeeper Alyssa Naeher stopped the ball at the goal line.

Casey Short then scored for Chicago in the 28th minute after a series of impressive back heels between multiple players that ended up in a service for Alyssa Mautz, who slipped in the box and sent the ball back out wide. Flash defender Elizabeth Eddy failed to properly clear the ball and instead placed it in front of Short, who was standing in the top right corner of the box. Short then set up a shot, which was deflected off Abby Erceg, and into the inside netting of the goal.

Christen Press then took an ambitious shot from about 30 yards out forcing goalkeeper Sabrina D’Angelo to get her hand on it and make sure it did not go in the goal.

The next chance for the Red Stars to double the lead came in the 52nd minute when Sofia Huerta tried to chip a ball over D’Angelo, but it went wide left.

In the 55th minute, WNY nearly tied the game when Adrian Leon had a shot on goal, but it went straight to Naeher, who had no trouble saving it.

Vanessa DiBernardo nearly extended Chicago’s lead in the 61st minute when she intended to serve in a cross, but the ball bent towards the goal and landed on the wrong side of the crossbar near the top right corner.

Huerta again came close to scoring in the 69th minute from a tight angle, but her shot pinged off the left post, and moments later she took another shot that cruised wide right.

Press nearly sealed the win for Chicago in the 84th minute when she broke away on a long ball and sprinted up the field with defenders chasing after her. She unleashed a shot but D’Angelo came up big to stop the shot.

Kristie Mewis had the last effort for WNY, but her header from far out went wide left.

The Western New York Flash will next host the Washington Spirit on Friday, April 29, at 7:00 pm ET. On Sunday, May 31, at 6:00 pm ET, the Red Stars will host the Orlando Pride, who defeated the Houston Dash 3-1 on the same day.