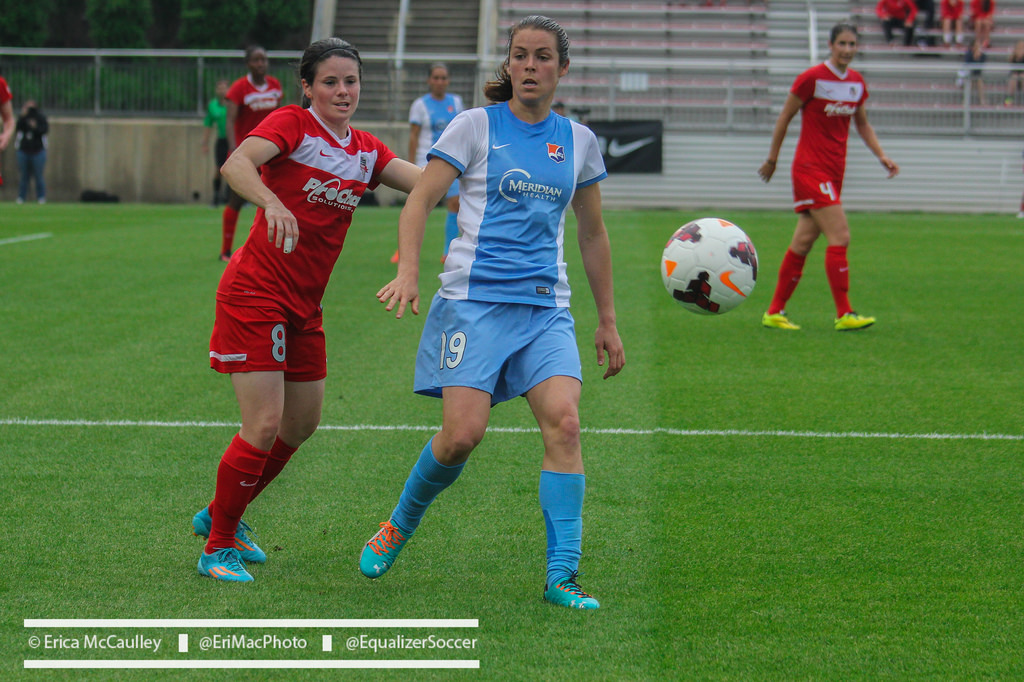 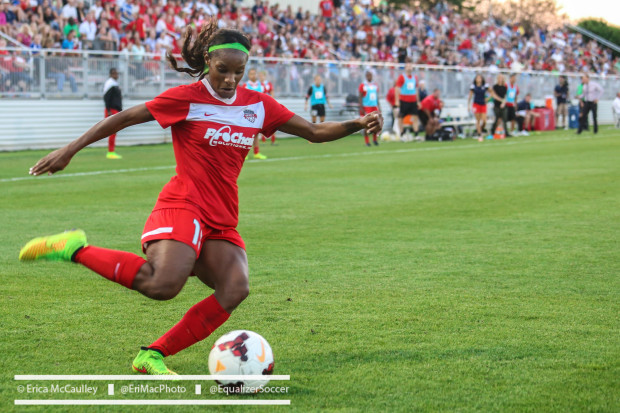 Crystal Dunn will be seeing a lot of her national team buddy Kelley O’Hara this weekend. (Photo Copyright Erica McCaulley for The Equalizer)

It’s Week 2 in the 2016 NWSL season. An attendance record may fall Saturday night in Orlando and an epic showdown ion the flank awaits the next day in New Jersey.

What to watch for: The Red Stars will play their first match at Toyota Park since naming it their permanent home over the offseason. They have played there before, and won’t soon want to remember the last time, a 3-0 loss to FC Kansas City in last year’s semifinal. The Flash have played there too, a 1-0 loss in the 2014 Red Stars home opener. The Flash will be trying to build on last week’s win in Kansas City, but their wide attack should encounter more resistance from Casey Short and Arin Gilliland. Short in particular, was one of the lone bright spots as the right back in what was her NWSL debut after missing two seasons for injury and another while playing in Norway. The Flash will also have to manage the left side without full back Jaelene Hinkle who has a broken toe.

What to watch for: The Dash turned heads with their performance last week, particularly the work of 1st round picks Rachel Daly and Janine Beckie. The team also moved the ball quickly and efficiently and kept the Red Stars off balance much of the night. The weak link in the Pride seems to be the midfield which could pose problems against the new-look Dash. Last week Tom Sermanni opened with a defensive minded midfield trio but replaced two of them with more attack-minded players at 60 and 71 minutes. Will Lianne Sanderson move into the starting XI for the home opener? A record crowd is expected at the Citrus Bowl.

What to watch for: If Week 1 proved anything it’s that the early part of the season will be a work in progress for the two clubs that boast NWSL Championship trophies. The Thorns are trying to meld an extremely talented group together and there were signs of great potential in the opener. The Blues are more of a patchwork collection this season as evidenced by the unorthodox 3-5-2 that called on three naturally central players to line up across the backline. Tobin Heath tore up the right flank against the Pride and her left-sided foil Dagny Brynjarsdottir scored the first goal. The safe bet is that the 3-5-2 won’t work so well against the likes of Heath and Brynjarsdottir. Another safe bet is that Vlatko Andonovski already knows that and has another tactical gambit up his sleeve.

What to watch for: If you are going to focus on one specific, individual matchup this weekend, focus here: Kelley O’Hara turned on a strong opening game at left back for Sky Blue, owning the wing and clamping down Manon Melis. This week she will look up to see likely Olympic teammate Crystal Dunn. It was a quiet opening week for Dunn despite the assist but does anyone have a doubt the MVP has big games in her this season? And if she can play O’Hara even to a stalemate, Sky Blue might have trouble finding attack elsewhere. They did almost everything right—and caught a few breaks—to knock off the Reign in Seattle last weekend but the Spirit present an entirely different set of challenges for a young side. Among them, Kelly Conheeney has the flu and will miss the match a week after scoring the game-winner in her dramatic return to the pitch.

What to watch for: How will the Reign respond to their shock home defeat to Sky Blue FC that ended their unbeaten mark at Memorial Stadium? Will the Breakers generate more attack than they did against the Spirit or were preseason prognostications that they would struggle to score already coming true? It is notable that Sky Blue played a very deep-lying midfield that helped disrupt the Reign’s normally beautiful attacking play, and the Breakers appear poised to play somewhat defensive in midfield, at least early in the season. One of two head-to-heads among the league’s original eight that has not seen both teams win (Sky Blue have not beaten the Red Stars in NWSL.)