The Lowdown: The Memorial streak crashes and burns 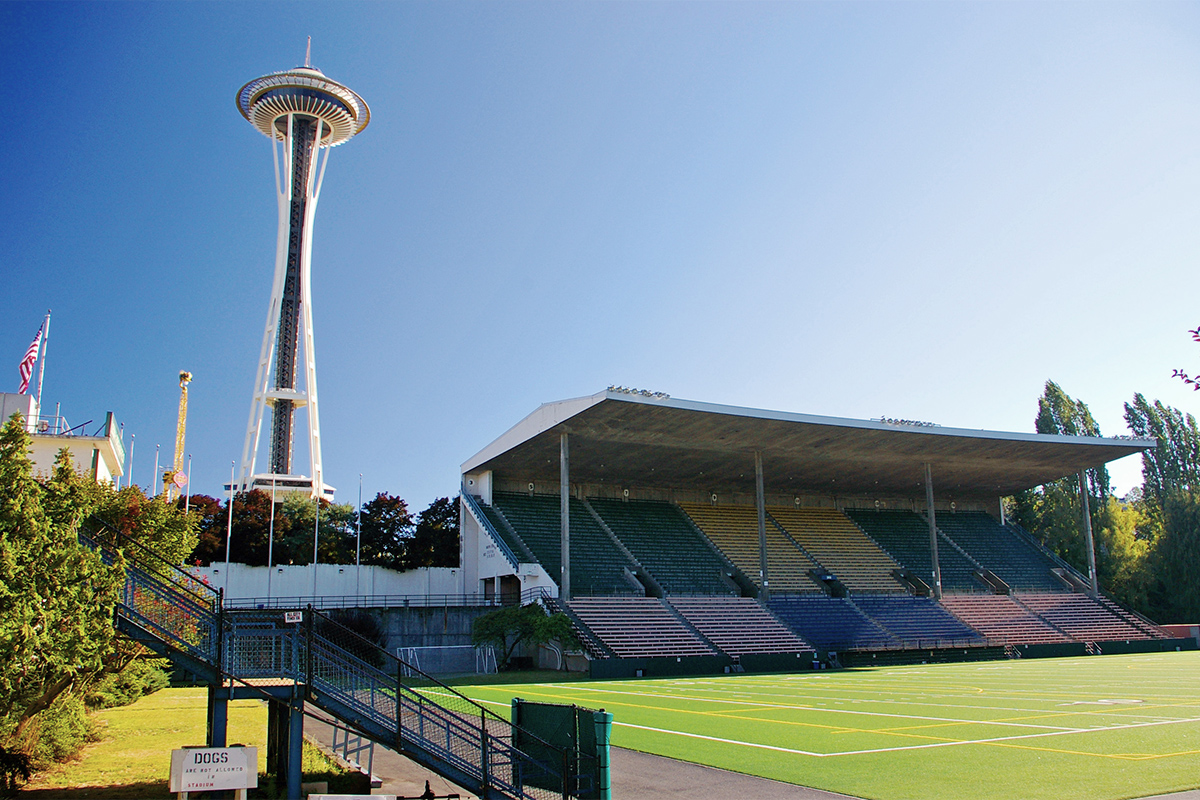 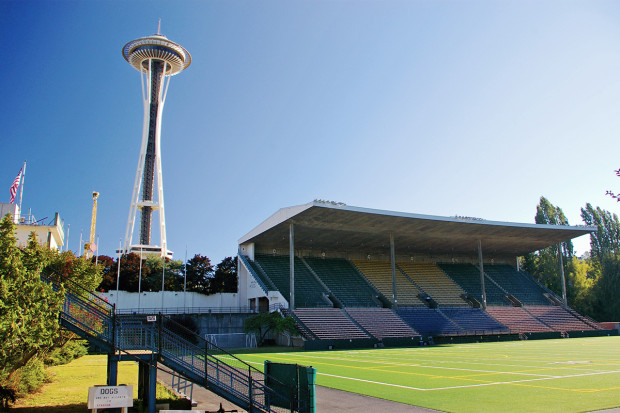 Memorial Stadium has been good to the Reign. But the two-year unbeaten streak is over.

For two full seasons, the Reign never lost at Memorial Stadium.  And then they did.  Laura Harvey always said the only thing for sure about the streak was that it would eventually end.  But who would have imagined it would end on Sunday afternoon? Certainly not against a Sky Blue team starting three draft picks and two players who made the team as trialists.  Not on opening day when the great midfield triumvirate of Kim Little, Jessica Fishlock, and Keelin Winters figures to rule the day.  None of that happened.  And now the streak is over.

“We didn’t perform,” Harvey said Monday, “which I haven’t been able to say very often in the last couple of seasons.  We didn’t show up.”

Harvey later heaped credit on Sky Blue for the way they disrupted things in midfield through Sarah Killion and Raquel Rodriguez, and how they finished their two best chances in the run of play (Killion had a penalty saved by Hope Solo.)  But make no mistake:  the story of this match was what the Reign didn’t do.

“The things we do well and what’s made us who we are don’t have to change,” Harvey said.  “If we continue to do that we’ll win football matches.  And we didn’t do that.  We don’t need to overthink it.  Players don’t become bad players overnight.  We just need to do the things that we’re good at and the things that we know work well.  If we do that seven out of ten I think we have a chance of winning games.  We weren’t even close to seven.”

The opening minutes belied the rest of the match.  The Reign completely bossed the field for nearly the first quarter hour.  And then out of nowhere, Sky Blue put together an attack.  Tasha Kai patiently played the ball off to Shawna Gordon, and then to Killion, and in one touch to an overlapping Kelley O’Hara, and finally a cross to Kai who snuck to the far post.  Rookie left back Carson Pickett, who had a fine professional debut, did not pick up Kai in behind her and then to compound matters got in the way of the shot and had it ever so slightly ricochet off her and in.  Solo probably overcommitted coming across the goal mouth (Harvey said no but added that Solo apologized after match for her giveaway that led to the second goal.) but the deflection off Pickett left her with no chance.  Fifteen minutes of near universal possession and the Reign were behind.

Sky Blue took the 1-0 lead to halftime though it would have been two if not for Solo stopping Killion’s penalty.  And when Merritt Matias scored a lunch pail goal early in the second half, the planet was back on its axis and the Reign were on their way to another home result.  Until they weren’t.

“I think maybe a little bit of complacency on our part,” Harvey admitted.  “Being at home and we’ve always been okay.  But you’ve got to earn the right and I don’t think we did that.”

The streak was not always perfect.  It was as recently as last year’s regular season finale when Sky Blue took an early lead and the Reign rescued a draw with a desperate goal in the 90th minute.  In a 2014 game against the Flash it took a 92nd minute equalizer to stave off defeat to the Flash.  Even in the semifinal that year, the Spirit gave the Reign everything they could handle and had a 78th minute penalty to take a late lead.  Solo stopped that one too and then Megan Rapinoe scored late to win it.  This time though, there was no such magic.

“In a way I was pleased for our long-term sake,” Harvey said candidly, “that we got punished for not performing well.  Because that hasn’t happened a lot.  We’ve performed poorly before and not been punished.  And (Sunday) we were punished for that.  You can’t expect to turn up and play poorly and win games.”

As if the result was not surprising enough, the Reign had been battled tested during a preseason tournament that gave them an opportunity to play the Thorns and Dash while Sky Blue were limited to college opposition.  The Reign won both of those matches without conceding a goal but Harvey said the result hid some less than stellar play and possibly led to a complacent mindset for the regular season opener.

“I wasn’t surprised,” she admitted.

Next up is a trip to Boston and then it’s back home May 1 to try and start a new Memorial Stadium streak against FC Kansas City.

“I was actually quite glad it’s over.  I’m fed up with talking about it in a way,” Harvey said.  “It’s nice to say it, but it doesn’t mean anything.  And we know that unfortunately.  Yes, it’s been fantastic to have that streak and people come to Memorial and know that it’s going to be difficult to play against us.  But having that monkey off our back a little bit is a good thing long-term.  I always guaranteed everybody one thing—that it would end.  I never wanted it to be in a playoff game.  So I can take that.”

Prior to kickoff of the Dash game, the club and league announced that BBVA Compass Stadium will host the 2016 NWSL Championship.  The match will take place Sunday, October 9.  The extended lead-time should allow fans to make travel arrangements for what should be an enjoyable event.  An additional bonus is that Monday is Columbus Day making travel a bit less of a hassle for those who get that as a long weekend.  On the flip side there will be only a week from the semifinals to the final as opposed to 18 days last year.  So team-specific travel will be a challenge. 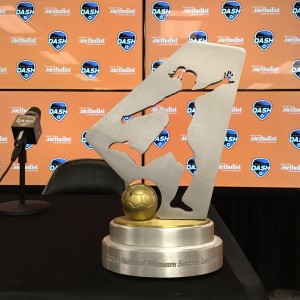 And of course, even a better timed announcement was not perfectly timed.  For some reason the press conference was scheduled to begin at 7pm EDT/6pm CDT, the exact time the season opener between the Spirit and Breakers was kicking off.  This was the much-anticipated first kick of the long sought after fourth season.  And depending on how you look at it, it was either completely sidetracked by the announcement, or the announcement flew under the radar as most fans were tuned into the live stream from the SoccerPlex.

{CURREN: Getting the little things in order}

To make matters worse, regular NWSL media were never officially informed an announcement was even happening.  It was sent out to the BBVA Compass Stadium press list which is separate from the Dash list.  Neither the Dash nor NWSL sent out a release announcing the announcement.

Here are the attendance figures for Week 1.  Once all 10 teams have played at home we will begin comparisons to previous seasons.

{THOUGHTS FROM: Gordon in Washington | Husted in Kansas City | Lauletta on Pride-Thorns}

-The Red Stars may have looked like the least organized team on the weekend, but there might be good reason.  Amanda Da Costa got injured literally on her last kick during warmups necessitating her replacement in the starting lineup by Jen Hoy.  The personnel switch also meant a shape change.   That does not account for all that went wrong for the Red Stars on the night, but changing the shape just before kickoff is never an easy scenario, especially on opening night.  There was no immediate word on the nature or extent of Da Costa’s injury.

-There might not be a better story emerging from the weekend than Kelly Conheeney’s.  Out of the game for years due to concussions she checked the following off her list: 1) a roster spot as a Sky Blue trialist; 2) the starting nod on opening day; 3) scoring the match-winner in Sky Blue’s shocking, 2-1 victory in Seattle.

-As of late Monday the Flash were cautiously optimistic about Jaelene Hinkle who had to leave Saturday’s game after a hard tackle by Heather O’Reilly.

-The crowd of 3,987 in Seattle was higher than any the Reign drew last season until after the World Cup.

-Kaylyn Kyle has now played for half of the 10 NWSL clubs.  She was originally allocated to the Reign, then to the Breakers who traded her to the Dash.  Next up was the Thorns and they traded her to the Pride for whom she started on Sunday night.

-Christie Rampone went the full 90 for Sky Blue on Sunday and has now appeared in all 10 women’s pro soccer seasons in the United States.  With some gaps in the leagues that stretches back to 2001 when she played for the New York Power.  Shannon Boxx and Karina LeBlanc had both played in the first nine seasons before announcing their retirements.

-If NWSL play will determine Canada’s starting keeper in Rio, how do we split Sabrina D’Angelo and Stephanie Labbe so far? Both kept clean sheets on the weekend—the only two in the league on Week 1.

-It is well known by now that FC Kansas City’s championship rings had a major spelling gaffe.  The good news is they are getting new ones.  So maybe if the league is around another few decades, the ones declaring them “NSWL Champions” will be some sort of collector’s item

-Here is my Player of the Week ballot:

1) Kelley O’Hara – owned the left flank against the Reign on both ends of the ball, assisted on Sky Blue’s first goal, was in the mix on their second, and drew a penalty.

3) Rachel Daly – rookie showed her skills by scoring on a cracker of a shot and later added an assist on a beautiful cross to Carli Lloyd; also helped Dash keep the ball moving on their way to dominating the midfield against the Red Stars

Also considered:  Janine Beckie had a solid, two-way performance in the Dash midfield and Amber Brooks probably played her best match in NWSL; Tobin Heath was sensational on the ball for the Thorns; Jaelene Hinkle showed that her time with the national team has made her a better player.

-Heather O’Reilly absolutely could have (should have?) been sent off for her tackle from behind on Jaelene Hinkle on Saturday night.

-Vlatko Andonovski went with a 3-5-2 against the Flash on Saturday and he used three center backs on his backline.  The result was little forward progress from the backs and not enough help defending the Flash’s speedy players.  Still, with some help from a sharp looking Nicole Barnhart, the only goal conceded was a penalty that came from a rather opportunistic handball call.  Either way I expect the formation and general tactics to evolve with the season.

-Keeping with Kansas City, they lost 1-0 on a handball called against Becky Sauerbrunn and a penalty clanged off the post by Heather O’Reilly.  It won’t be often they drop points on mistakes from their Federation Players but it certainly played a massive role in this one.

-With the possible exception of 2013 when she was recovering from wrist surgery, have we ever seen Hope Solo play worse than she did on Sunday?

-Nice to see Stephanie Ochs back after missing most of last season with a torn ACL.  And she came one great Alyssa Naeher save away from scoring her first NWSL goal.

-Finally a note about Leo Ponce who passed away over the weekend at the age of 25.  I never knew Leo other than by name but he was an important part of the Houston soccer community as a fan, journalist, and historian.  Leo wrote for the Houston based site Keeper Notes.  His colleague and friend, Dash writer Hal Kaiser, penned these reflections.

NWSL Week In Review: Getting The Little Things In Order
U.S. adds June 5 friendly against Japan