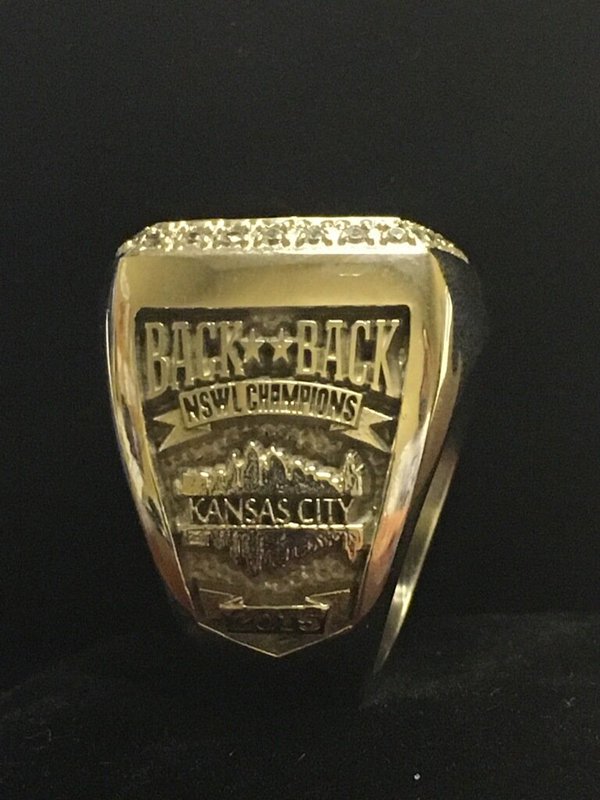 Opening Day has not been kind to FC Kansas City for the past couple of years. A trend that continued today as they lost 1-0 to the Western New York Flash at Children’s Mercy Park, the second straight year they have fallen on opening day in the home of Sporting Kansas City. Some quick thoughts about tonight’s match.

Spellcheck is important: The night started off with a special ceremony where the defending NWSL Champs received their well-earned rings. However, once the team posted pictures of their hardware fans quickly pointed out a glaring mistake. The side of the ring declared them “NSWL” Champions. After becoming a hot target for much of the first half, a tweet and a response tweet making light of the situation were both deleted.

The coaches and players didn’t notice though, they appreciated the gesture and were just happy to have won them in the first place.
Head coach Vlatko Andonovski’s response when asked about the misspelled rings? “I guess we’ll get new ones.”

Becky Sauerbrunn loved playing in the big stadium: “The crowd and atmosphere were amazing. I’m just sorry that we couldn’t deliver them a win. Hopefully, they will come back and check us out at Swope (FCKC’s home for all but 1 of the team’s remaining games).

After last year’s opener, they are now 0-2 in the stadium, but hope to right that ship when they play another regular-season game here in September.

Nicole Barnhart is going to win some games for FCKC this year: Part of FC Kansas City’s success over the years has been because of their goalkeeper Nicole Barnhart. Although she’s fallen off the national team radar over the past year, she has never wavered for her club. In fact, without the additional work she has come to camp looking fit and fast.

That was needed tonight as Western New York outshot their competition 18-11, getting 6 on goal. Several times on the night, she was called on to make point-blank saves.

Western New York ARE good The Flash team that finished 7th last season and missed the playoffs is just a memory. After a busy offseason, including the addition of new head coach Paul Riley, Western New York is very young and very fast. They are not afraid to attack and many times tonight, frustrated the FCKC midfield by suffocating them on the ball.

Sam Mewis is VERY good: Make no mistake, this is Samantha Mewis’ team. The second year player looked calm and authoritative on the ball and directed traffic throughout the night for her side. Seemingly every attack the Flash put together was started by or directed through Mewis.

It was fitting that Mewis was the only one who could get past Barnhart, even then it had to be on a penalty kick.

Opening troubles: FC Kansas City have been one of the most successful teams in the league, but the opening of the season has not been kind to them. In fact, they have never won in four Opening Day games, with the last two results being losses.

Andonvoski attributes this, at least in part, to his team’s adaptation to offseason changes.

“I think we tried some tactical changes this game in order to take advantage of our new defense. I think that I didn’t apply the necessary tactics, but at halftime we made some adjustments and came back stronger. I don’t feel we played our best game, but I don’t think we necessarily played deserving to lose.”

To top off the frustrating night, they actually had a chance to tie the game late when Tiffany McCarty drew a PK to the left of the goal. However, Heather O’Reilly’s shot rang off the post and doomed their chance at salvaging a point.

Rookies help lift Houston to a 3-1 win over Chicago
Gordon: Thoughts from opening night at the Plex