Gordon: Thoughts from opening night at the Plex 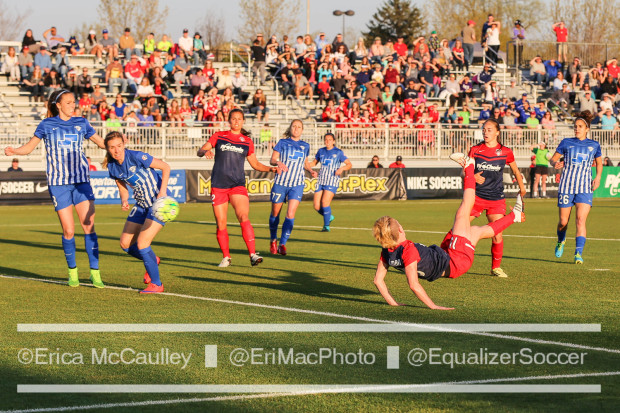 Breaker defenders watch as Joanna Lohman (on the ground) scored on a 3rd minute bicycle kick. (photo copyright EriMac Photo for The Equalizer)

The Spirit’s Joanna Lohman opened scoring for 2016 in style with a 3rd minute bicycle kick as Washington defeated Boston in the first match of the league’s fourth season. The tally, assisted by Crystal Dunn, was the only score of the night.

Although it’s too early to make sweeping pronouncements about either team after just one game, there are definitely some key takeaways from Saturday’s matchup between the Spirit and the Breakers.
Most Dangerous Attack the Spirit’s Ever Had: This may seem like a weird phrase to write after a 1-0 win but it appears as though Washington’s attack is finally multifaceted. To be sure, the team converted probably the most difficult chance of the night and failed to convert numerous easier ones, but the combination play between the front three was some of the best the team has ever produced in league play. A fantastic give and go between Katie Stengel and Estefani Banini in the first half may have been the best illustration of this. The ideas and the personnel seem to be there. The question becomes, how long will it take the team to put it altogether in the final third?
Crystal Dunn for her part played the role of provider rather goal scorer.  When she found herself streaking at the backline, she looked to lay off to those around her rather than take a shot. Last year, Dunn generally had to take it to goal herself as support was usually trailing too far behind. She’s settling into a familiar yet new role for her club team as she’s now on the wing instead of playing centrally.
If Dunn can fine tune when to have a crack at goal herself, and the chemistry around the attacking players can really coalesce, the Spirit could become a menace offensively.
Boston’s a Work in Progress (Emphasis on Progress?): Boston was the only team in the NWSL last season to have a goals against average above 2. After allowing a goal three minutes after kickoff, it looked like the scoreline might end up very lopsided in Washington’s favor. Other than the very early goal, credit Boston for fairly stout defensive effort. The team did enough defensively to keep the Spirit at bay. Albeit a loss, the opener does give Boston something to build from.
“To open the first ten minutes to go down a goal I think was definitely tough for us but I think as a team we showed a ton of resilience and we were able to put together a fairly solid defensive performance after that, Breakers’ co-captain Whitney Engen said about the team’s defensive performance.  “I think that it’s going to be a lot of coming together for us this season getting time on the ball with each other, getting to know each other’s runs all that kind of stuff but at the end of the day we have to be proud of the fact that we didn’t (put our) heads down.”
Matt Beard, making his NWSL coaching debut,  thought his team “done well” and pointed to the chances the team generated  including a narrowly wide shot by Stephanie McCaffrey and header by Kristie Mewis that was saved off the line, while still trying to gel as positives to take away from the game. 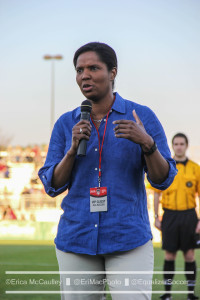 Brianna Scurry addresses the crowd at the SoccerPlex, 15 years to the week after she helped launch WUSA. (photo copyright EriMac Photo for The Equalizer)

A Night to Remember:  Before Saturday’s league opener began, Briana Scurry took the field for the ceremonial first kick declaring to all those in attendance part of women’s soccer history as she helped usher in the league’s unprecedented fourth season. Undoubtedly, it’s a moment that players, coaches and staff for both sides will remember for its historical significance for years to come.

For two of the Spirit’s stars from last night, the game will also hold special significance individually. The two players bookend the Spirit in age.  Joanna Lohman is the team’s oldest player at 34 while Cali Farquharson, whose signing was made official yesterday morning, is the youngest at 22.
Fifteen years ago this week, when professional women’s soccer made its debut, promoters released an eagle to provide aesthetics in the league’s inaugural match between the Washington Freedom and the Bay Area CyberRays. With professional women’s soccer in its third rendition and operating on a very tight budget, such frill would now be blasphemous.  This type of pageantry also wasn’t required last night as Lohman’s third minute bicycle provided more brilliance than the release of any fowl could ever.
“It was honestly a dream come true when it happened,” Lohman said about the tally, unhesitatingly asserting it was the best she’s ever scored.  Lohman, who was a freshman at Penn State when the WUSA made its debut has witnessed the failures of the past pro leagues and have had them impact her career.
Where Lohman represents the old guard, Farquharson represents the future. Saturday night was also a dream come true for the Arizona State product who was just 7 when WUSA commenced. Farquharson entered the game in the 65th minute and after a few stray touches, she became the most dangerous player on the field for the final quarter hour.
“As a kid you always dream of being a professional soccer player and the day has finally arrived where I could step out on the field and say, ‘ you know I’m playing professionally’, so it’s kind of surreal. It’s a surreal day.”
The NWSL certainly has its warts, but it does allow extremely talented players the chance to continue chasing soccer dreams.  Hopefully, the league can continue to grow and solve its issues. In another fifteen years, maybe one of them can deliver the ceremonial first kick of the 19th NWSL season.
Related TopicsBrianna ScurryCali FarquharsonFeaturedJoanna Lohman