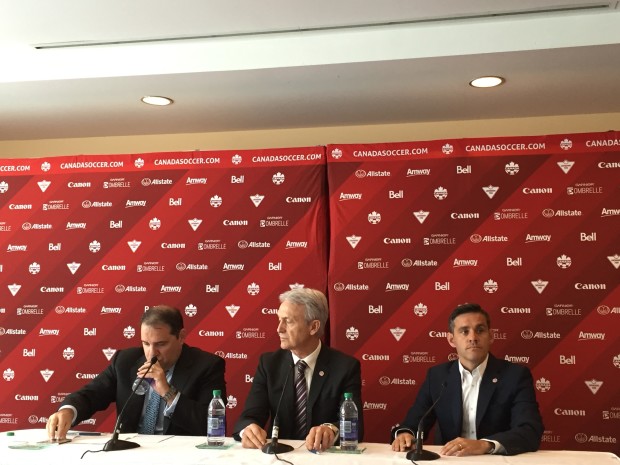 VANCOUVER, B.C – Canada’s journey to reach the podium at the 2016 Rio Olympic games will be difficult, but if they have the confidence and swagger of Coach John Herdman, they stand a better chance of achieving success and possibly an Olympic medal.

Canada, Germany, Australia and Zimbabwe will compete in Group G. The action kicks off on Wednesday, August 3 with Canada vs Australia in Sao Paolo. Canada will also play Zimbabwe in Sao Paolo on August 6 before traveling to Brasilia to play Germany on August 9. It will be crucial that Canada beat 95th ranked Zimbabwe as Germany and Australia will be tough opponents.

Australia’s co-captian Lisa De Vanna got her wish as she predicted Australia, Germany, and Canada in the same group.

Canada’s renewed rivalry with Brazil would lead you to believe that Canada would have preferred to end up with Brazil as an opponent in Rio. The reds will have played Brazil five times between the start of December, 2015 and June 7, 2016. Could this be a strategy to outwit the hosts? John Herdman insists he wasn’t planning on getting Brazil, at least in group stage action.

“No I wasn’t, I was hoping for something a bit different because we’re learning from each other every time. I think we’ve got a little edge on Brazil. When it really matters we seem to come through against them. I have a feeling we’ll see them at some point.”

Canada will see The Matildas, led by gaffer Alen Stajcic. Australia is vastly improved and they were one of many teams that surprised at the 2015 World Cup. They held Sweden to a 1-1 draw, beat Brazil, and narrowly lost to Japan 1-0 in quarter-final play. Canada won’t be able to waltz all over 5th ranked Australia and John Herdman knows it.

“You’ve seen the Aussies in the World Cup and they looked like a good team,” said Herdman. “They’ve got a great attack, solid defense, it’s a game that I think we are quite evenly matched. It’s a huge six point game for us.”

Germany will be a whole other kettle of fish. If Germany has locked up first place in Group G, perhaps you could see Silvia Neid rest some of her key players. On the other hand, Germany may have something to play for and Canada could face multiple challenges on all fronts. Germany is a football factory, they produce talented player after player. On the men’s side and women’s.

Despite not having retired players like Nadine Angerer, Celia Sasic, and Nadine Kessler, who announced her retirement due to injury only hours before the draw. Germany will be a monumental test for Canada’s young and veteran players. Silvia Neid is also stepping down as Germany’s coach following the Rio Olympics. She will want to make sure Germany wins every last match she’s involved with.

Taking all this into consideration, Herdman shrugged off the notion that Germany will be out of sorts and weakened.

“The Germans are never weak when it comes to tournaments,” revealed Herdman. “They’ve got a conveyor belt of players and that’s when they step up and thrive. We know what the Germany are going to bring. I’m looking to get Canada’s first ever win against them. Canada’s never triumphed, if there’s a time to do it with Sinc (Christine Sinclair) and the crew, this is it. That’s a huge goal for us.”

The goalkeeper tasked with stopping the likes of Anja Mittag, Alexandra Popp, Kyah Simon, Lisa De Vanna and Zimbabwe’s best players is unknown. Erin McLeod faces a long road to return to play as she undergoes ACL surgery and rehabilitation. Stephanie Labbe and Sabrina D’Angelo will battle to earn that first match at the Rio Olympics. Whether Herdman decides to rotate his goalkeepers or anoint one keeper as his number one has not been determined.

Herdman is hoping McLeod will be able to help Labbe and D’Angelo with advice and support as she looks to share her goalkeeper wisdom. McLeod’s recovery will take place in Malmo, Sweden with her club team FC Rosengard. Herdman already has an idea of when he’s hoping McLeod will be fully fit and recovered to return to the pitch.

“She’s with her club so it’s the same as if Wayne Rooney was injured at Manchester United,” said Herdman.”He’d be there at the club, and that’s where Erin is. She’s got a world-class surgeon working with her. I think he’s worked on (Zlatan) Ibrahimovic before. She’s in great hands and we just wish her the best to get back for a speedy recovery. Hopefully she can put 2019 on her calendar.”

As for Canada’s roster at the Rio Olympics, you should expect to see the players who helped Canada qualify for the Olympics during the CONCACAF Rio Olympic Qualifying tournament in February, the Algarve Cup and Canada’s victories over the Netherlands on April 10 and 12. The Olympic roster is set at 18-players. Marie-Eve Nault, Kaylyn Kyle and Adriana Leon are still in the thinking, but it appears they are long-shots to be named to Canada’s roster.

Herdman explains: “I think we’ve said with any player, your career must tell a story. It’s important if you’re in those professional environments, what a platform they have to play every weekend. The gaps that we saw in 2015 are being bridged through their professional career. You’ve got to keep your mind open and the reality is who would have thought Erin McLeod wouldn’t be going to the Olympics. Nobody predicted that stuff. Who’d of thought Matheson would have been where she was prior? I think the good news for those player (is), we’re keeping our mind open. If their performances are strong enough and the crystal ball reveals things that we never predicted, anyone has a chance at this point that’s on our radar, and they certainly are.”

Are they on the outside looking in?

“I think any player that hasn’t been with the team through the qualification campaign, and Algarve Cup are certainly on the outside. Football is a funny game. Who’s to say Leon’s season at Western New York Flash is the best of her career? Our gap was goal-scoring, attacking threats, and that’s a player that can certainly have a good season and push forward. We’re in consistent communication with them and those players know that they still have an opportunity. That’s exciting.”

Yes, it is an exciting time for Canada Soccer. Youngsters Janine Beckie, Shelina Zadorsky, Rebecca Quinn, and Deanne Rose are showing that they can be part of the next wave of Canadian internationals on the big stage. Finding a mix and chemistry with veterans like Christine Sinclair, Diana Matheson, Sophie Schmidt and Melissa Tancredi will be vital. You can’t win a football match without scoring goals. Canada has struggled to support Sinclair, but the Rio Olympics could be the turning point.

“Three tough matches, win them all, get out of your group, and lets see if we can hit the podium.”