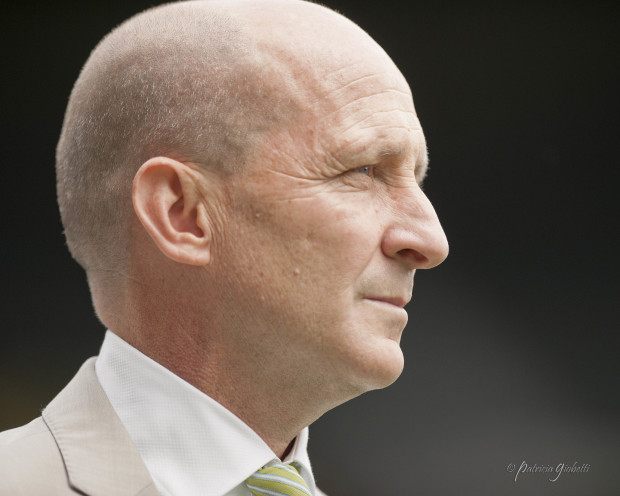 Paul Riley will lead a Flash side short on experience but long on exuberance. (Photo Copyright Patricia Giobetti for The Equalizer)

The Flash have 100% roster turnover since the start of the 2014 season. And they have brought in Paul Riley to make this year’s young group the best it can be.

Last season (6-9-5, 7th place; missed playoffs): A young Flash side showed signs of being competitive but ultimately wilted in the face of speculation the players had tuned out long-time coach Aaran Lines. The season ultimately crashed shortly after the World Cup when a three-game home stretch saw them take just one of a possible nine points even after leading Sky Blue 3-1 in the first leg.

Key Changes: The changes have been flying in Western New York the last few years to the point that not a single player remains from the 2014 roster. Among the players shipped out this offseason were former Best XI defender Brittany Taylor, World Cup winners Whitney Engen and Sydney Leroux, as well as Becky Edwards. They also lost Chantel Jones to retirement, Michelle Heyman who elected not to re-sign, plus Jasmyne Spencer and Jamia Fields to the expansion draft. And about halfway through those changes, Lines stepped down as head coach.

To replace the departed, the Flash dipped into the international market and brought in Korean midfielder Jeon Ga-Eul and Australian defender Alanna Kennedy. The Engen trade yielded Abby Erceg and Adriana Leon, and Leroux brought back Jess McDonald.

The Flash did most of their offseason tinkering sans a head coach, and then eventually nabbed Paul Riley who was let go by the Thorns after two seasons.

“It’s the fastest team I’ve ever coached,” Riley said barely containing laughter. “We have a ton of speed at every position. It really is crazy the amount of speed we have. I think it’s a little bit that we’ll have to harness our speed in certain areas. It will definitely be one of our pluses.”

Among the fastest players are Jaelene Hinkle and Lynn Williams, both coming off injuries. Hinkle was recently called in but did not dress for the United States matches against Colombia but is back training with the Flash and should play on the weekend. Williams missed the tail end of last season for surgery that kept her on the shelf through much of the offseason.

“Lynn looks great,” Riley said. “I don’t think you would know that Lynn had surgery in the offseason. She’s one of the people that could have a breakout season.”

Last season the Flash were overcrowded at center back and that forced rookie Abby Dahlkemper to play either right back or defensive midfield for much of the way. But the roster reshaping has allowed Dahlkemper to become a full-time central defender where she will partner with World Cup veteran Abby Erceg.

“I’m happy with the leadership. Erceg’s been a big part of that leadership,” Riley said. “Coming in from Chicago she brought a lot of leadership with her. I think her experience will help the group as a whole.”

Riley added that the team arrived to camp fit which pleased him since his hire prevented him from sending players his usual offseason fitness program.

Areas of Development: The Flash lack experience. And they are young.

“We’ve only got three players that can rent a car,” Riley deadpanned, a reference to McDonald, Erceg, and Jeon as the only Flash players to have reached their 25th birthdays. “We’re very young obviously but lots of energy and youthful exuberance.

“The whole preseason has been about what’s on the front of the shirt, not what’s on the back. I told them it’s a who’s who of nobody knows anybody. No one has heard of any of our players. My job is to make sure that everyone’s heard of them by the end of the season. That’s going to be a tough thing to do, but everybody’s gone about their business.”

Another challenge, especially with a young team mostly unfamiliar to Riley when preseason began, is getting a firm hold on how things will look once the real games begin. Like many NWSL sides the Flash saw only college and boys’ teams for preseason opposition and their match against national champion Penn State had to be cancelled because of late scheduling conflicts.

“It’s difficult to see how we’re going to start because obviously we haven’t really had any quality of preseason games,” Riley said. “I’ll be interested to see what happens on opening day (in Kansas City.) I think we’re in a good place mentally and physically. We’ll have to see what happens when the ball gets picked up.”

Point of Interest: Sabrina D’Angelo has won the goalkeeper battle from Britt Eckerstrom and will begin the season as the club’s number one. D’Angelo appeared in seven matches as a rookie last season with interruptions for injury and a benching following a poor performance against the Thorns.

“She’s done really well preseason,” Riley said of D’Angelo. “Sabrina’s the number one. She’s got great feet. A lot of confidence. She might be another Michelle Betos. Not supersized but she’s pretty athletic. She’s got great reflexes. We’re pretty confident with her.”

D’Angelo is a near certainty to be named to Canada’s Olympic roster which will open the door for Eckerstrom to get playing time. A rookie out of Penn State, Riley said Eckerstrom struggled early in preseason with the speed of play but has looked much better after settling in especially while D’Angelo was out of camp with Canada.