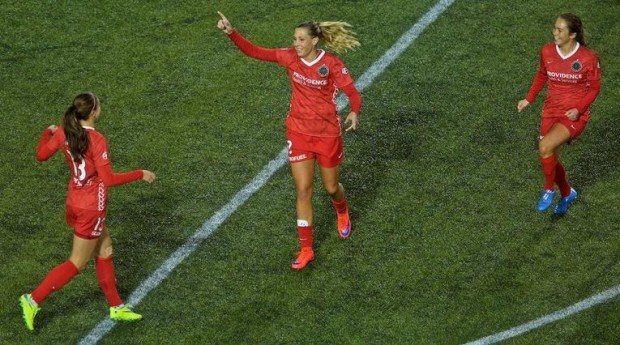 Allie Long, center, will be trying to help the Thorns return to the playoffs.

Halfway through our 2016 NWSL previews with today’s look at the revamped Portland Thorns FC.

Last season (6-9-5, 6th place; missed playoffs:  The Thorns were loaded up with players bound for the World Cup and never could find a suitable rhythm.  Often unable to turn a wealth of talent into goals, the Thorns won only four of their final 18 matches after a 2-0-0 start and missed the playoffs for the first time.

Key Changes:  Missing the playoffs led to Paul Riley being fired as head coach.  To replace him the Thorns snagged Mark Parsons away from the Washington Spirit.  But that was just the beginning.  In a blockbuster series of moves with the expansion Pride, the Thorns traded Alex Morgan and wound up with the No. 1 overall pick (Emily Sonnet) plus the rights to Lindsay Horan and an expansion draft choice that turned into Meghan Klingenberg.  They also sent Sinead Farrelly and McCall Zerboni to Boston for the No. 2 overall pick which was flipped to Sky Blue for Nadia Nadim and brought in Adrianna Franch.  And with an international slot acquired in the Morgan trade they landed the rights to and signed Dagny Brynjarsdottir.

The biggest splash won’t be felt until midseason.  After much speculation the Thorns and French midfielder Amandine Henry agreed to terms on a deal that will see the dynamic midfielder head to Portland after her Lyon contract runs out in early June.

Strengths:  It is clear the Thorns are strong on every line, at least on paper.  So let’s focus elsewhere.

“I think the group has been exceptional,” Parsons said.  “We’re very close despite people being away.  The players that are away, we’re getting emails before games or before the week of training to say good luck or to check in.  When we’re together, the team chemistry is great.  Players said it to me today.  They walk in and they’re ready to work hard and enjoy soccer.  They can’t wait to get to work and be around the people.  That’s how it should be.  But it’s a coach’s biggest challenge to create that environment.  I think we have.

“Our strength is going to be this together group that want to work extremely hard and play good soccer.”

Beyond the realm of team chemistry, the Thorns are loaded for bear.  Franch and Michelle Betos gives them a powerful, one-two punch in goal with no anticipated international interruptions.  Sonnett will partner Kat Williamson in central defense with Klingenberg adding a dynamic, two-way presence on the left.

The attacking positions could interchange a bunch during the season, but they are plentiful, and the new coach likes that many of his options are versatile.

“The most important thing for a possession team to be a dangerous team is having players in central midfield that can play under high pressure,” Parsons said.  “I think we have a lot of great options that can help that.  When I look at our team, I think we have minimum four, and up to five players that can play that role in the center mid spots that all have those skill sets and those attributes.  And then we have a sixth in Amandine joining us in the summer.

“Having those players that can play in the middle of the park will help us not just be a possession team but a dangerous team.  I’m excited to see how that develops.”

Areas of Development:  With the abundance of talent on hand there are not many areas where the Thorns are noticeably deficient.  They did make a move to bring in a goalkeeper despite returning Michelle Betos having been named Goalkeeper of the Year.  That could rankle some keepers, but Parsons said Franch was not brought to Portland to be handed the starting job.

Sonnett is a clear talent as evidenced by her inclusion in Jill Ellis’s regular rotation with the national team of late.  She has also spent the last eight months completing her college season, making her international debut, and being the first pick in the NWSL draft.  An Olympic roster spot beckons if she plays well enough.  That could be a lot for a 22-year old playing a pivotal position.

“I think we need to keep giving her minutes because she hasn’t been playing consistent minutes for the national team,” Parsons said.  “Mentally, emotionally, we have a 22-year old  straight out of college living on the opposite coast.  I think she is a very great, special person and player.  But she’s 22 and she’s going to need a little time.  We know that.  She hasn’t played in NWSL before.  She hasn’t played with the forwards that she’ll be playing against running off her shoulder and running at her when she has the ball.  She’s going to take time, but no doubt she is going to be a very important player to us.”

Henry would make almost any team in the world better, but integrating her midseason could be tricky especially when she’ll be scheduled to head out again to join France ahead of the Olympics.

Point of Interest:  The Thorns open the season against Orlando Pride and then head to Kansas City to face the reigning champions.  Those are the two weeks where the fruits of the recent preseason tournament could make an impact.  The Thorns hosted the Dash, Reign, and Oregon State to Providence Park while the rest of the league has been limited to playing college sides.