Takeaways from the USWNT’s pummeling of Colombia 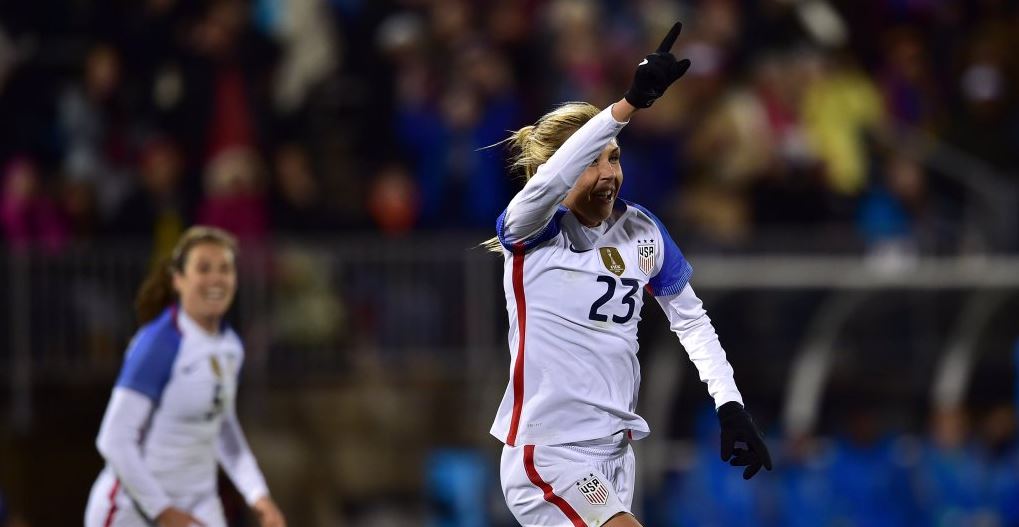 There was plenty of irony in Colombia being the next opponent for the U.S. women’s national team after its potentially historic Equal Employment Opportunity Commission (EEOC) litigation last week.

While the U.S. women went for the #EqualPlayEqualPay hashtag, with plenty of support from all realms of the sports world and as high up the political food chain as Hillary Clinton, Colombia’s hashtag would be a whole lot shorter, #Pay, after reports say they haven’t been given any monetary rewards in the last four months.

Sadly, as you probably know if you’re at this site, that’s not unusual around the world, but it’s particularly frustrating for a country like Colombia, whose rather amazing World Cup run last summer (beating France, nearly topping England, and playing the United States very tough until going down to 10 women early in the second half) was one of the more heartwarming stories out of Canada. The run was especially positive since Colombia’s most famous moment from its last major tournament (2012 Olympics) was infamous, and its 2011 World Cup appearance left much to be desired.

However, Colombia is now the clear second-best team in South America behind Brazil, and will be somewhat near home when it participates in its fourth consecutive major tournament this summer at the Olympics.

Yet until Wednesday night in Hartford (technically East Hartford, but you know), Colombia had played exactly zero competitive games since another strong performance at last July’s Pan American Games which saw them beat Canada (albeit not full-strength, but with some first-team players) before losing to Brazil in the gold medal match.

In that same time period, the United States has played 18 games, not to mention the accompanying training camps, while Colombia, well, they had a few practices in the last nine months. When they could find the time. Or the fields. Or both.

So the United States’ 7-0 evisceration of Colombia Wednesday, while impressive, was somewhat predictable, especially with the Colombians missing Lady Andrade and a couple of other potential starters this summer. Colombia has only four days to prepare for what shapes up as another beating in Philadelphia, but there is hope with some proper training, they can recapture the form they showed last summer in Brazil.

But the operative words may be “proper training”. And if they can’t find a way to throw their players a few bucks after two games in front of 20,000+ fans in the United States, who knows when they will?

What else did we learn on a cold New England Wednesday night?:

1) About that lack of depth for the U.S.

At this time last spring, it seemed that Jill Ellis and her staff were either unable or unwilling to try new players out, but just a year later, the U.S. player pool is exploding at the seams. Most of us (any of us that had seen an NWSL match, at least) knew Crystal Dunn would do just fine at this level, but with Abby Wambach retired, Megan Rapinoe out long-term, and on a night with Alex Morgan and Morgan Brian nursing minor ailments, it was business as usual. Maybe better business.

Mallory Pugh quieted doubters on the national team pretty much before they could open their mouths, but how composed and skillful (woo hoo, skill) she’s been both on and off the ball has still been extremely impressive. Lindsey Horan has stepped in and the team has probably improved, while Ellis still has a list almost as long as Santa Claus’ of players she could call in and still win the majority of her matches (you can list them in the comments if you wish), led by Allie Long, who made her case for Olympic inclusion Wednesday with a pair of goals.

Nitpick: Couldn’t Ellis give Alyssa Naeher some minutes in her return home? I mean, would it really hurt preparation that much?

It’s never a great sign in an Olympic year to have a number greater than 18 (roster size), but Allie Long put Christen Press’ discarded No. 23 to good use with a couple of goals and a dominant performance in the midfield. Like Dunn, anyone who watches NWSL wouldn’t be completely shocked, Long has been of the most prolific attacking mids in the league the last couple of seasons.

The problem for Long is going the other way, and perhaps unfortunately for her, there wasn’t much chance for her to prove she could do that job against Colombia. She started the match in an unfamiliar holding role (in Brian’s place) and did have a couple of hiccups before the U.S. began dominating midway through the first half. Long is a top-echelon NWSL player, but it’s still hard to see her with a major role at this year’s Olympics. However, she is not a bad option to have should the unthinkable happen and a player or two go down. Perhaps more than any other player, the first couple of months of the NWSL season could be huge in her stealing a coveted Olympic berth.

TFW when you score your first international goal…☝ pic.twitter.com/UFg68GeObW

3) Fitness is key when you’re not fit

Colombia actually wasn’t bad for the first 20 minutes or so, showing the organized defensive shape they did at the World Cup under Felipe Taborda, and almost being dangerous a couple of times going forward. But, as you’d expect from a team that hasn’t played a competitive game in forever, they hit a wall quickly, and – especially in wide areas – were made to look silly by the likes of Tobin Heath and others repeatedly soon thereafter.

By about the half-hour mark, Colombia wasn’t even coming close to containing the midfield, allowing Dunn, Pugh, and Lloyd to run wild, which is never going to end well for a U.S. opponent, and it certainly didn’t in this game. As the second half dragged on and Colombia got slower and slower, they didn’t even bother to try to defend as the U.S. (impressively) used quick restarts to create numerous opportunities as well. Colombia’s fitness stands to be better this summer, but one area where the United States’ dominance has never been questioned in women’s soccer is in fitness, and that doesn’t appear to be changing anytime soon.

Bonus) No one got hurt, apparently

NWSL fans might have been watching much of the match through one eye, as a matchup against a potentially overly physical Colombia team on a cold night (on grass apparently watered moments before kickoff) could bring disaster for an NWSL team just 10 days before the season opener.

But it appears everyone got through unscathed, although there was a close call for Carli Lloyd early in the second half when she looked to be hit hard after losing her footing. She stayed down for a second, but bounced back up, allowing the Houston Dash and anyone else involved with NWSL to breathe again.

Alex Morgan and Morgan Brian did miss the match with hip and hamstring injuries, respectively, although U.S. Soccer officials and Ellis described the injuries as minor.

Business as usual for US against Colombia
2016 NWSL Preview: Boston Breakers