Going for Gold: What lies ahead for the USWNT 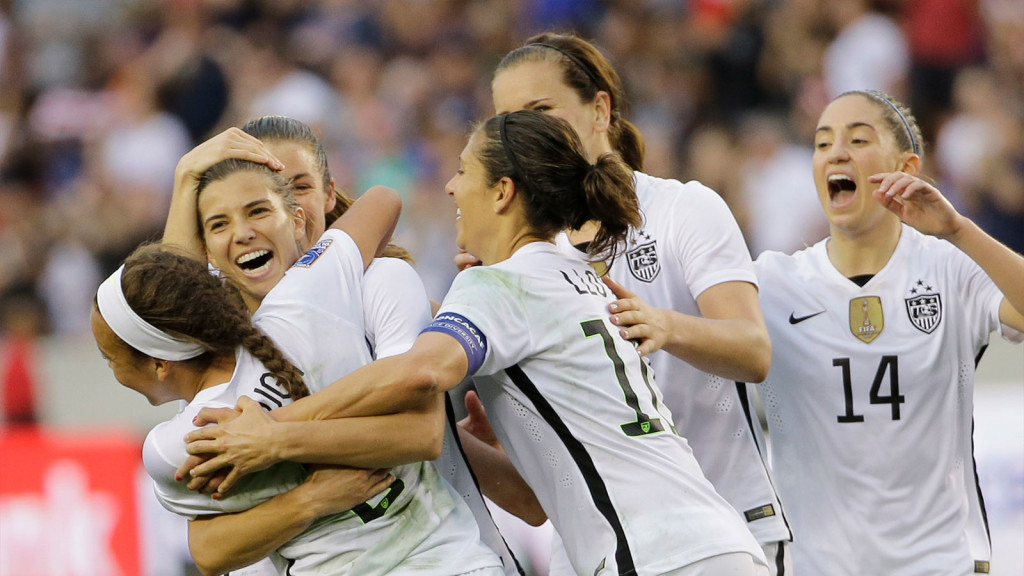 There is plenty to follow with the U.S. national team in the four months before the team heads to Rio for the Olympics.

The start of the 2016 Olympic soccer tournament is just over four months away, and while the days are quickly counting down, the U.S. national team still has a lot of soccer to play before heading to Rio. There will be international friendlies, a pre-Olympic training camp, and the NWSL season, which kicks off on April 16.

The national team’s stark transformation in personnel since the 2015 Women’s World Cup has shown how much can change in a short time. It’s safe to say these next four months will have many new developments and surprises in store. Here are some storylines to watch:

Who plays where?
The national team is full of versatile players that can line up in many different positions. Crystal Dunn, Christen Press and Kelley O’Hara come to mind as players that have lined up in multiple positions. Both Dunn and Press have played up top and out wide for Jill Ellis while O’Hara has played fullback and outside midfield.

With the NWSL season set to start next month, it will be interesting to see if these players’ positions on their respective NWSL teams will help dictate their roles with the national team. Will Dunn play up top and continue her scoring form for the Spirit? Could Press line up out wide in Chicago? Will O’Hara be on the defensive line for Sky Blue? These positional decisions in the NWSL could impact the makeup of the national team and will be something to follow closely this season.

How will Lindsey Horan adapt to the NWSL?
Horan is the most prominent national team player making her debut in the NWSL in 2016, and she does so with the star-studded Portland Thorns. Horan played four seasons with PSG in France from 2012 to 2015. Now that she has moved back to the U.S., her first season in the NWSL comes at a pivotal time in her international career.

Horan has the opportunity to feature for the U.S. in the 2016 Olympics, but a poor NWSL season could see her move down the depth chart. She shouldn’t have a problem fitting in with the highly talented Thorns as she was amongst many international stars during her time at PSG. However, the difference in styles between the French league and NWSL could cause some growing pains for Horan.

Can someone play their way onto the team?
Last year, Dunn had an NWSL season for the ages, which played a large part in her becoming a regular on the national team after the World Cup. Is there another player who can have a similar type of season and rise?

There is no U.S. player that currently jumps out as a candidate in 2016, but things can change very quickly, as seen through the rapid ascension of Mallory Pugh.

Two interesting cases will be those of Heather O’Reilly and Whitney Engen. While both have been regulars on the national team, they were recently left off the CONCACAF Olympic qualifying roster. It remains to be seen where these players stand in the national team makeup, but strong spring performances could eliminate some of the mystery.

Injuries…
Injuries are a constant concern for every team at every level, but the impact of any injury this close to the start of a major international tournament is magnified. The U.S. has already seen how an injury can reshape a team with the loss of Megan Rapinoe in December. Her absence opened up the door for other players, most notably Pugh, who has pushed herself into the national team picture in 2016. Of course, there is no way to predict who any potential injuries will impact, but the threat is always there and thus needs to be accounted for.

On the subject of Rapinoe, she is in the midst of her ACL rehab and recently described her chances of appearing in the Olympics as a “coin flip” on the Men in Blazers podcast. If she is healthy, there is no reason to believe she will be left off the team and therefore will take the spot of someone who has been with the national team the past few months. Could it be an outright swap of Rapinoe for Pugh or will Ellis take depth from another position to include Rapinoe?

As one of the top players in the world, Rapinoe’s presence or absence in Rio will be a major story at the Olympics.

Has Alex Morgan regained her dominant form?
This one is simple. If Morgan plays and scores as she did at the SheBelieves Cup, the U.S. has one of the top goal scorers in the world. If she is not able to continue this type of form, the team could struggle offensively.

US players headed to Lyon next season: club chair
U.S. still top of FIFA rankings; Canada back in top 10