Arsenal boss says trip to Seattle too good to pass on 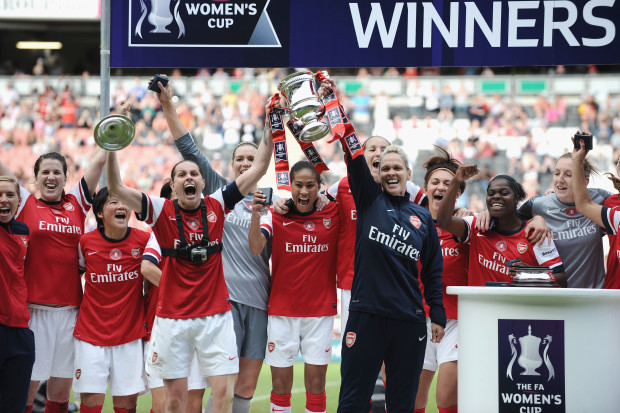 Arsenal Ladies are heading to Seattle to play the Reign this Spring. (Getty Images)

Arsenal Ladies Head Coach Pedro Martinez Losa says the opportunity to take his side to the Pacific Northwest for glamour friendly against Seattle Reign FC was too good an opportunity to turn down.

The former Western New York Flash assistant coach was speaking to The Equalizer after the Gunners opened their FA Women’s Super League campaign with a 3-1 win over newly promoted Reading Women.

It was made public last week that the North London club will travel to Seattle to take on the Reign on May 26th, which will see Head Coach Laura Harvey and midfielder Kim Little come up against their former employers.

The Arsenal Ladies coach said a gap in both club’s schedules was the perfect opportunity to arrange the high profile friendly, while also giving his players more competitive football.

He said: “One of the objectives and learnings from last season is we have to play competitive games when we can, which is why we played against Bayern Munich and Wolfsburg in pre-season.

“There is a good relationship with Laura Harvey and with Kim Little, so we thought it was a fantastic opportunity, and in my opinion and from my experience of working in America, Seattle is one of the best teams playing football.”

One of the major gripes of the FAWSL calendar this year is the number of extended periods where no fixtures are taking place due to FIFA dates and international fixtures, but also the number of weeks where clubs must sometimes play three games in the space of seven days because of those breaks.

In the case of the friendly with the Reign, Arsenal has a fixture away at Doncaster Rovers Belles on May 21st, but then don’t play again until June 26th, which is why Losa was keen to take his players away to play a competitive fixture, while allowing them to also spend some time to recover and recuperate.

“We had a two month preseason, which for me is too long, players just want to play and I think one month would have been enough,” he said. “We have to be responsible for the players and their wellbeing. Playing Sunday, Wednesday and then Sunday again is not ideal.

“Big gaps are also not what we want, so the game against Seattle will be a great experience for our players to be exposed to that type of opposition.”

The high profile friendly has once again raised the question of a Club World Cup amongst fans of the game, with teams now looking to take on opposition of a high standard from other countries to better prepare their players.

When asked his views on a potential competition, Losa expressed his support for the idea.

“I think the investment that some clubs are putting in in terms of infrastructure and professionalism is making the clubs competition more and more attractive.

“We (Arsenal) already went to Japan last season for a fantastic experience, this pre-season we played Wolfsburg and Bayern Munich, and now we go to Seattle.

“I think for the progress of the game and for the fans, it would be fantastic to have a kind of Club World Cup.”