The Lowdown: Catching up with Britt Eckerstrom 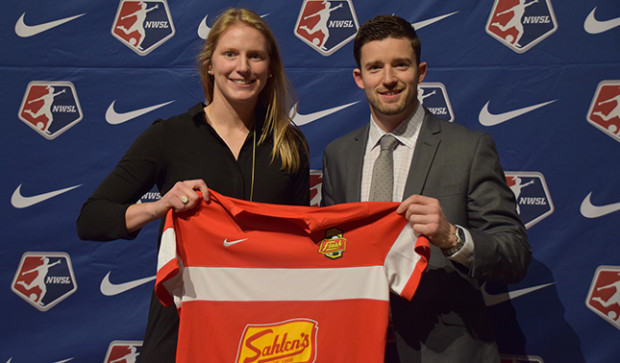 “I’m more than lucky to be here and to pursue my dreams.”

That sentence could be attributed, with some paraphrasing, to literally thousands of newly minted professional athletes. When Britt Eckerstrom said it, the words were powerful and surreal. That’s because she was saying them eleven days after a ping pong game against her mother was interrupted by the shrieking of a fire alarm. In an instant, Britt and her mom Pam were up the stairs and out the door—she stopped ever so briefly to scoop up the family dog—and over to a neighbor’s porch. And that is where Britt and her parents, and two house guests watched their long-time home burn to the ground.

(The house guests were Tori Huster and Tiffany Weimer of the Washington Spirit for whom the Eckerstroms were serving as host family. Ecksterstom has two sisters, an older one who has moved to Washington D.C. and a younger one who was away at college.)

“It’s pretty crazy what a difference a couple of minutes can make in terms of the damage done to your house,” Eckerstrom said. “It didn’t take very long, but it was still pretty big. There is nothing you can really do. We had the dog and the family together and waited for the fire department to come and put it out.”

When the fire was finally out the firefighters rummaged through the wreckage and pulled out as much as they could, notably wallets and identification information. But Eckerstrom acknowledges that, “I didn’t find that much.”

She did get lucky in that her road bike was in the house and not the garage where the fire most likely originated. So that was able to be salvaged, even though for the moment she no longer has the proper riding shoes. “That took a long time to pick out and I’ve put a lot of miles on that so it was cool that I still have that. The rest is just sort of small stuff from my room.”

One box in Britt’s bedroom contained some old baseball cards paper ornaments from her grade school years. The box is fireproof. And it worked. Items saved. Other items she has collected over the years were not so fortunate.

“I’m kind of a trinkets person. So I keep a lot of things from a lot of places I’ve been. But…it’s okay. Those memories are still with you and you’ll go to new places and find new things that you’ll find special. So it’s okay.”
***
When the fire happened Britt Eckerstrom was about to journey to a new place—Buffalo. That is where the Western New York Flash train, and it was the Flash that made Eckerstrom the 26th player—and first goalkeeper—taken in this year’s NWSL draft. Her car was packed and she was literally scheduled to drive north the next day.

“I was packed up ready to leave the next morning so that was all my stuff,” she said. “Because it started in the garage I guess the cars burned. All the cars pretty much one by one blew up. That’s just part of it.”

In the short term, Eckerstrom said there were few thoughts about soccer. She did call Flash general manager Rich Randall the night of the fire to tell him what happened and that she would not be making the drive to Buffalo as planned. Randall told her to take as much time as she needed. But as Thursday turned into the weekend, her mom suggested she make her way to Flash preseason.

“My mom actually said to get a flight. She said there really wasn’t much for me to do once they boarded the house up. My parents were just living in a hotel and dealing with insurance and all of that legal stuff. It’s not like I could have a real role in helping them in that sense. They said ‘We’ll get you some clothes and we’ll get you out there and you can start focusing on that and things will be okay here.’”

Four days after the fire, Britt Eckerstrom was with the Flash for their first training session of 2016.
***
“It’s been really great actually,” she said her first week as a pro soccer player. “I’m getting to know the team and the coaching staff and their personality and style of training. I’ve really enjoyed it so far. All the girls have been really, really nice. The older kids that have some experience are helping us younger guys figure out the ropes and what they expect. It’s a young team in general. We’ve been really welcomed. It’s a really good group and good training sessions so far so I couldn’t ask for much more.”

The Flash went through the draft without a head coach before landing Paul Riley a month later. Eckerstrom had never crossed paths with Riley before, but his reputation for accentuating fitness preceded him.

“I heard that he’s a pretty tough guy, kind of old school,” she said and then added with a laugh, “I heard rumors of his suicide mile and some of the fitness related things that he’s already have us do this week. I heard about that. I (also) heard that he loves the game and loves the players and is just kind of an intense guy. All that’s been pretty true. But we’re young so we’re ready for it.

Asked if the reality lived up to the legend or if the legend made for an easier reality, Eckerstrom was magnanimous. “No one wants to do fitness. But I like it so far. It’s been good.” In past seasons Riley has kept his teams in training twice a day deep into the season. As of early this week Eckerstrom said the players did not know for sure how long two-a-days would continue.

As for her place in the club it seems pretty secure with only two goalkeepers in camp. And with Sabrina D’Angelo likely to make Canada’s Olympic team at least as an alternate, Eckerstrom should see her share of time on the field this summer.

“I’m not too worried about it,” she said of playing time. “I’m working as hard as I can and I’ll be ready for the opportunities whenever they come.”

Ecksterstrom’s first taste came last weekend in a preseason match against West Virginia. The last time she played West Virginia was last November when a College Cup berth was on the line. Eckerstrom and Penn State won 2-0 and the following weekend won the program’s first national championship.

“It was really different from the last time when we played West Virginia. That game just had huge implications. Pretty different from playing them indoors with a pro team while they’re in their spring season. It was fun playing with the pro players. It felt like a totally different game.”
***
Of the five people who were in the house when the fire broke out, only Britt Eckerstrom is isolated from everyone else. Her parents are together in Maryland getting ready to move into a rental house. Huster and Weimer are teammates on the Spirit. Britt, who said she has hardly discussed the fire with her new teammates, says there are pros and cons to being on her own with it.

“It makes it easier because I’m removed from the situation so it lets me focus on other things. I get to focus on soccer especially right now with such a new thing playing professionally. But it also makes it harder just not being there with your family. But I talk to them every day. They’re doing alright.”

As for the hardest part about the ordeal, Eckerstrom offered this:

“The hardest part was just watching everything that I knew my parents had worked really hard for just being destroyed. Those are huge things. The house and these cars. It was filled with some of these things that you’ve collected over your lifetime. There are things that you find important and can’t be replaced as easily and they’re gone.

“But they are just things. Our family got out safe and our pups got out safe. That’s what matters.”