Who is Ashley Sanchez? A look at USWNT’s latest call-up 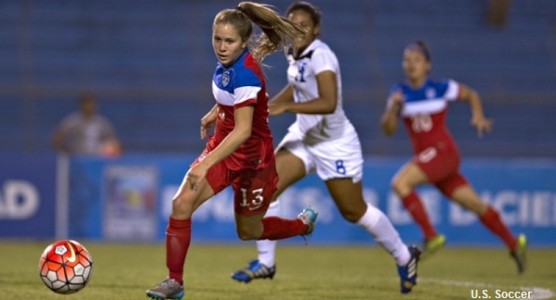 U.S. coach Jill Ellis has called in Ashley Sanchez — the U-17 naitonal team captain who just turned 17 last week — to the senior team for matches against Colombia on April 6 and April 10, making her the second player that age to be in camp with the senior team (Pugh, who turns 18 on April 29, is the other). Sanchez is the first player born in 1999 — the year of the United States women’s national team’s historic World Cup triumph on home soil — to be called into camp with the senior team. Yeah…go ahead and feel old along with everyone else.

So, who is Sanchez?

First, let’s answer that visually. Have a look at some of the things she did to Jamaica earlier this month at U-17 World Cup qualifying:

OK…so that was exciting! Need a little more information? Well, Sanchez is from Monrovia, Calif., and she plays for the club So Cal Blues. She graduates high school in 2017 (feeling old yet?) and she is committed to UCLA, where she will join — you guessed it — her U.S. countrywoman Pugh. UCLA is welcoming Pugh and Canadian wunderkind Jessie Fleming in 2016 before Sanchez arrives on campus next year. [Insert pressure on Amanda Cromwell to win four straight NCAA titles here.]