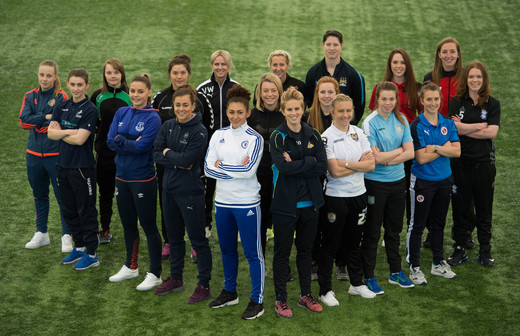 The Equalizer is previewing the upcoming FA Women’s Super League season in England. Part One can be found here, while Part Two focuses on the second five clubs.

Liverpool Ladies can join Arsenal Ladies in being the only club that can brag about winning back-to-back titles in the Women’s Super League. Unfortunately, they didn’t have much to boast about last season, with injuries and some poor performances seeing the club finish second from last, despite going into the campaign having won the two previous league titles.

Head Coach Matt Beard departed in the off-season for the Boston Breakers, taking keeper Libby Stout with him, while the likes of Fara Williams and Natasha Dowie also left the club. With so much experience leaving in one hit, the Reds looked like they could be relegation candidates in 2016.

However, new Coach Scott Rogers has recruited well, bringing in England goalkeeper Siobhan Chamberlain from Arsenal Ladies, who is arguably an upgrade on the departed Stout having been the best keeper in the league between 2011 and 2013. Rogers has also signed Dutch captain Mandy van den Berg to bring a calm head to the defense, while international teammate Shanice van de Sanden will excite Reds fans with her pace, direct style and almost unpredictable approach up front.

England defender Alex Greenwood, who started her career on the blue side of Merseyside, is a solid addition at left-back, while Welsh internationals Tash Harding (who almost joined the Washington Spirit last year) joins along with Wales captain Sophie Ingle, a player one former coach once said about her, “she doesn’t know how good she really is.”

Having lost so many players in the off-season, stability will be key. Captain Gemma Bonner is a leader and will be vital in defense alongside the likes of former UNC defender Satara Murray, but midfielder Katie Zelem, who came through Manchester United’s Center of Excellence, is a wonderful player to watch.

Calm, composed and bags of energy, Zelem is an England youth international and is sure to play a key role this season, especially with the departure of Fara Williams.

Manchester City Women pushed Chelsea Ladies all the way last season thanks to some incredible form after the World Cup, embarking on a 13 match unbeaten run that saw them pipped to the post on the final day of the season.

With the red side of Manchester not having a women’s team, City have benefited hugely from the support they have received from the men’s side of the club, benefiting from, as Kosovare Asllani described it, “world-class” facilities, and resources that few other teams can match.

When Manchester City Ladies rebranded as MCWFC in January 2014, they concentrated on recruiting a strong spine, which came in the shape of keeper Karen Bardsley, captain Steph Hougthon, Jill Scott and Toni Duggan.

It was a clever move as all four are still with the club and are key components to what is a very talented group. Add the likes of World Cup star Lucy Bronze, former FSU defender Megan Campbell, and Sweden forward Asllani, and City have the makings of a team that will not only challenge in the WSL, but also in the UEFA Women’s Champions League when they make their debut later this year.

Midfielder Izzy Christiansen was one of the most improved players of 2015, and was rewarded with a call-up to Mark Sampson’s England squad at the back end of the year and a new contract last week. Her energy, tenacity and eye for goal will be key again this year, while it’s also worth keeping an eye on 17-year-old forward, Georgia Stanway.

Already touted as a future England forward, she scored an absolute ‘Golazo’ at the weekend in the FA Cup. She might not get a huge number of minutes on the field, but she may well be the impact player City turns to in times of need.

Notts County Ladies are arguably the hardest team to evaluate following a below par league campaign in a year that saw them reach two cup finals in 2015.

Head Coach Rick Passmoor was honest after the Continental Cup final defeat to Arsenal Ladies in October when his evaluation of the season was one of pride for reaching the two cup finals, but very much ‘must do better.’

The departures of Alex Greenwood (Liverpool Ladies) and Desiree Scott, who has returned to FC Kansas City, left a couple of gaping holes in the side, but he has been able to keep the majority of those that were present last year.

Wales midfielder Angharad James comes in, although is some way off the experience of Scott, while the real eye opener was the loan signing of former England winger, Rachel Yankey, who joined the club on transfer deadline day from Arsenal.

Two years ago County had the best defensive record in the league, conceding just eight in 14 matches – last year they conceded 20. The stat is surprising when you look at the depth County has in defense.

Laura Bassett, who has to win the award for unluckiest player of 2015, will be huge in leading the club into the 2016 season, and will be joined by a familiar face, but one who hasn’t played since the summer of 2014 due to injury, Sophie Bradley. Add the athletic and clever Amy Turner to the equation, and all of a sudden you have depth at the back.

County have talent, no question, and they will need to call upon it if they want to better last year in what is a much more competitive league. Jess Clarke and Ellen White up front, both of whom have been in the England setup in the last year, but missed out on the squad for the SheBelieves Cup, will be relied on heavily to provide the goals to fire County higher up the league.

Reading enter Women’s Super League One as Champions, but the step up will be big and they will have to adjust quickly if they are not to be left behind in the league. An away match against Arsenal on the opening day will not define their season moving forward, but will be a good indicator of where the club is at and how well they are able to compete at the higher level.

Kelly Chambers, the second female Head Coach to enter the top division, will rely heavily on the goal threat of England U-23 international, Emma Follis, who finished with 12 goals in her first season with the club. Followers of the WPSL may remember Follis from a short stint at Seattle Sounders Women in 2014.

Another name that might be familiar to Washington Spirit fans is former Hofstra University forward Amber Stobbs, who played in the Spirit’s Reserve team. Stobbs returns to England to add firepower, while the Royals have also signed Equatorial Guinea forward Jade Boho-Sayo, who played for Bristol City Women last year.

What Reading lack in star names, they make up for in experienced youngsters. Goalkeeper Grace Moloney, 22, is involved with the Ireland National Team and will face competition from new recruit and England U-23 international, Mary Earps. Defender Becky Jane, 22, and midfielder Lauren Bruton, 23, bring experience beyond their years and played a big role in the club’s promotion last year.

Add these hungry youngsters to the likes of Wales internationals Helen Ward, her country’s all-time leading goal scorer, and defender Kylie Davies, and what you have is a squad that has a good blend of youth and experience that could be vital in helping Reading avoid a quick return to FAWSL Two.

Sunderland were the surprise package of last season and at one point were well in contention to win the league following promotion from FAWSL Two in 2014.

Manager Carlton Fairweather has continued the admirable work of former Head Coach Mick Mulhern, quickly buying into the ‘Sunderland Family’ ethos of the club and helping a tightknit group of players, become even tighter.

Sunderland is slightly isolated in terms of its location, and therefore tends to attract the best players from the North East. As a result, players like forward Beth Mead, who has been prolific for the club over the past four years, will often be attracted to the Lady Black Cats.

Mead was top scorer in FAWSL One last season, but has only made one of Mark Sampson’s England squads thus far, and did not feature in friendly matches with China and Australia last year. But it won’t be long before she is leading the line for England, especially if she carries her goal scoring form into this season, which is highly likely.

Alongside her, many will know Stephanie Roche, who joined the club after her release from the Houston Dash. Roche was in and out of the team last season, but now has a full pre-season under her belt and can focus fully on her football following the attention she received from her Puskas Award nomination.

But Sunderland is very much about the team and not the individual. With many of the players, such as goalkeeper Rachael Laws, captain Steph Bannon and talented youngster Keira Ramshaw, all coming from the North East, there is a togetherness at the club that was key to them finishing fourth last year and achieving results like a 4-0 win over eventual champions Chelsea Ladies.

Squad depth could be an issue for Head Coach Fairweather, and he has tried to address that by bringing in the likes of midfielder Lucy Staniforth, who started her career at Sunderland, from Liverpool, and Krystal Johnston from Manchester City.

But like most clubs in the league, Sunderland have their fair share of young prospects, one of which is Emma Kelly. She’s only 19 but has already featured in the first team and has captained her country at the U-17 level. She can play in midfield or at forward, and possesses a clear threat in front of goal.

She, alongside many of the players from the local area representing the club, will be key in continuing the team’s impressive rise and ability to compete with the best.

That wraps up our look at the FA Women’s Super League. We’ll bring you updates every week throughout the season and the occasional player feature.