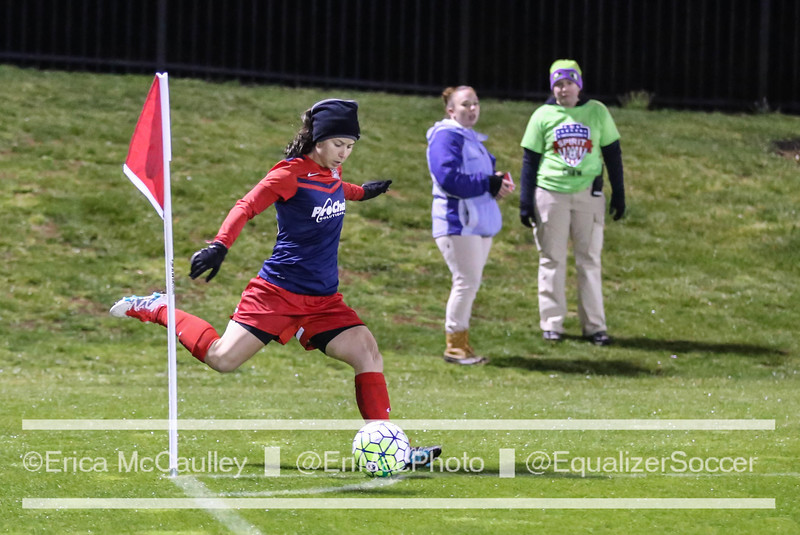 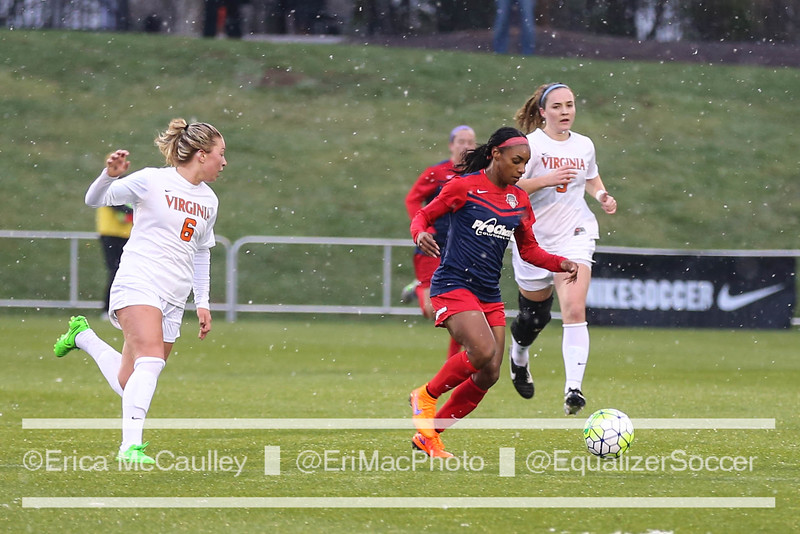 The Washington Spirit beat the Virginia Cavaliers 3-0 in their first preseason match of 2016 on Saturday. (Photo: EriMac Photo for The Equalizer)

Prior to last night’s game, if the Washington Spirit and Virginia Cavaliers were playing each other, you could count on two things. The first, which held true, was the weather would be atrocious. With temperatures hovering around freezing and snow falling throughout, it was a down right miserable night.

The second thing, that the Spirit would not win, did not hold true. The Cavaliers had claimed two wins in the previous three meetings between the two teams, while the third ended in a tie. Last night, Washington won handily 3-0 with Estefani Banini recording a brace, and Katie Stengel adding a goal and an assist.

Virginia finds themselves in a position they haven’t been in the last couple of years – lacking in experience. To be sure, NWSL teams should be beating collegiate teams in preseason, but it’s worth noting that the Cavaliers aren’t just any college team. The top pick in the two most recent NWSL drafts, Morgan Brian and Emily Sonnett, were Hoos, as well as last year’s NWSL rookie of the year, Danielle Colaprico. In addition to Sonnett, two more Virginia products were drafted this past January.

Add it all up, and it means that the Cavaliers’ ranks are currently full of inexperienced players. Virginia head coach Steve Swanson thought the game was a positive experience for his young squad.

“(It was a) big challenge for us certainly with the experience we have right now, but certain areas I was happy, but we got exposed which you would expect from a pro team,” Swanson said postgame. “…I think this is a really good barometer where we are and what we need to work on from a standpoint of an education piece for our players. You couldn’t ask for a better game for us at this point in time.”

Conversely, the Spirit also find themselves in a different position than in prior training camps. Washington’s preseason roster features 16 players that were with the team a season ago. That’s by far the most returnees the team has ever had and it showed, even though the Spirit were testing some of their non-rostered players and draftees as well.

The Spirit do have some new talent, but the real challenge this season is adjusting to new head coach Jim Gabarra. Tiffany Weimer, who is entering her third season with the team, feels like this is a bit easier than adjusting to a ton of new teammates.

Swanson made a similar observation in his post game comments.

“What you can see over the years is…the metamorphosis of the league over the time and it’s gotten better and you’ve got players now that have been with the club for little awhile and I think that shows. I think they’re (the Spirit) further along at this stage than I would say in previous years.”

Given the game’s conditions, it’s not surprising that Saturday’s goals weren’t of the jaw dropping variety, but rather were best described as scrappy. The goals, however, were noteworthy, especially the two scored by Banini.  Banini, who was limited to just four appearances last season, was the star of the evening. The Argentine played aggressively and appears to have recovered well from the knee injury that kept her sidelined for much of 2015. That’s good news for a team looking to diversify goal production after Crystal Dunn accounted for nearly half the team’s goals a season ago.

Also returning to the pitch after injury was Weimer. She suffered an ACL tear that kept her off the field in 2014, and logged only 38 minutes in 2015. For the first time since the ACL tear, Weimer says she’s in a good place physically.

“It’s the first time I’ve played in a match pain free since 2014,” Weimer admitted after the match, “It’s been a long time and a hard road but it’s always worth it.”

Elsewhere on the field, another Penn State alum, Whitney Church, played in defensive midfield after holding down the right back spot for the Spirit last year as a rookie. When asked if that’s where Church will be playing moving forward, Gabarra answered that they “certainly want to see her there. See if we can train her to be a number 6.”

Of the non-roster invitees, centerback Mary Kathryn Fiebernitz stood out. The left footed centerback is more of an “enforcer” and could complement the existing defensive players on the Spirit well.  Gabarra said that Fiebernitz was on of the players who “did really well” in camp this week. Given the team’s crowded roster, it will be interested to see if Fiebernitz can fight her way onto the roster.

Offensively, between the weather conditions, new personnel, and it being the first week of preseason, there were some missed passes and miscommunication.  Despite these factors, the Spirit offense showed its potential to be both varied and dangerous this season. It will be intriguing to see what the offense looks like with another week of practice and hopefully more cooperative weather next weekend against reigning NCAA champions Penn State.