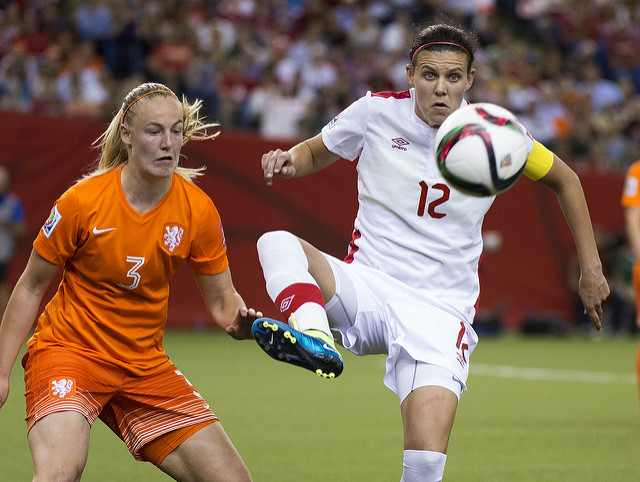 Canada will travel to play the Netherlands in an international friendly on April 10th. (Photo: Canada Soccer)

Canada Soccer announced on Monday that its women’s national team will play the Netherlands in an international friendly on April 10th. The match will take place at Jan Louwers Stadion in Eindhoven, Netherlands.

Canada continues to fill out its schedule of matches in preparation for the Rio Olympic Games in August. Last week, Canada Soccer announced two home friendlies against Brazil on June 4th and 7th in Toronto and Ottawa respectively, their first matches at home since hosting last summer’s Women’s World Cup. Most recently, Canada won the Algarve Cup with a 2-1 win over Brazil last Wednesday.

Netherlands missed out on the final UEFA Olympic berth when it finished second at the UEFA Women’s Olympic Qualifying tournament early in March. The Dutch beat Switzerland 4-3, but fell to Norway 4-1 and drew Sweden 1-1, finishing the tournament off with four points. Sweden secured the final Olympic berth with seven points in the four team qualification tournament.

Canada and the Netherlands last met in the group stage at the 2015 Women’s World Cup, where they drew 1-1 on June 15th in Montreal. Canada took the lead early in the first half through Ashley Lawrence, but Kirsten van de Ven equalized for the Dutch in the 87th minute.