Going for Gold: What is Carli Lloyd’s best position? 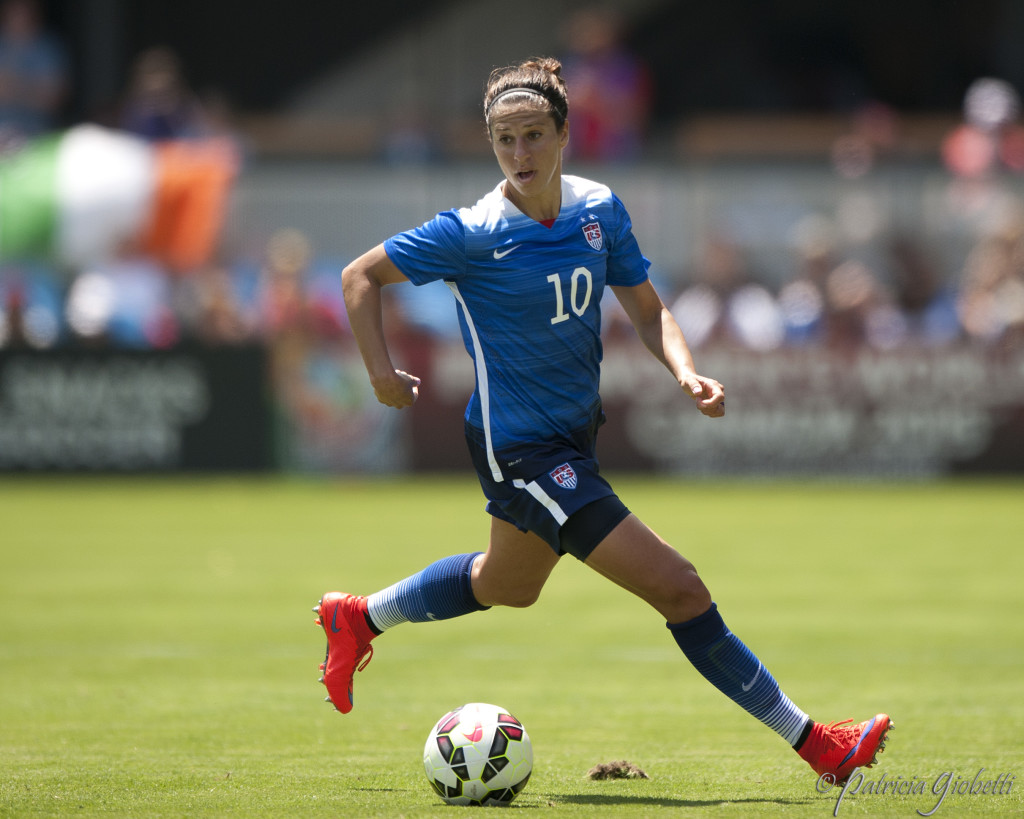 Carli Lloyd’s position within the USWNT lineup will be vital at the Olympics. (Photo Copyright Patricia Giobetti for The Equalizer)

Now that the U.S. women’s national team has officially qualified for the 2016 Rio Olympics, we are going to chronicle the team’s road to the Olympics with our new column Going for Gold, which will provide regular check-ins as the team prepares for the 2016 Games.

The SheBelieves Cup gave Jill Ellis an invaluable chance to see how the young national team players would respond to playing the top competition in the world. However, one of the biggest questions coming out of the tournament involves one of the veterans on the roster.

Following these three games, where the U.S. often struggled offensively, the question must be asked: Where is Carli Lloyd’s best position?

Lloyd’s current hybrid position allows her to roam the field between Alex Morgan and the midfield, finding holes in the defense to attack. This is the position from which she dominated the Women’s World Cup in 2015 and has poured in 23 goals in her last 22 matches.

The problem with Lloyd’s current position comes when she does not receive the ball enough. This can be seen throughout the team’s matches against England and France and at times against Germany. Lloyd is the engine that makes the U.S. offense run. She is at her best when she is dictating the offense, and thus the team is best when the ball is at her feet.

This was not an issue against lesser opponents in Olympic qualifying when the U.S. was constantly in control regardless of Lloyd’s involvement. However, against the top competition in the SheBelieves Cup there were long stretches when Lloyd did not see the ball and the offense suffered.

At the Women’s World Cup, Lloyd flourished when Jill Ellis moved her up the field because she had Lauren Holiday and Megan Rapinoe capable of providing her consistent passes in spaces where she could create chances.

At the SheBelieves Cup, without Holiday and Rapinoe, that connection from the midfield to Lloyd was inconsistent. Lloyd failed to get on the ball as often as she normally does, which isolated her and Morgan.

In the second halves of the first two games, Lloyd made adjustments and came back further to get the ball. This did not solve the offensive issues though. Without a brilliant individual effort by Crystal Dunn against England and a stoppage time goal from Morgan against France, this tournament could have been very different for the U.S.

Lloyd is a unique talent. Her ability to create opportunities for herself and others is world class as is her finishing ability. What needs to be figured out is what the team needs more of from her–playmaking or finishing.

The SheBelieves Cup indicates the team needs her creating the attacking opportunities more so than finishing them. With Morgan in her best goal scoring form in years along with other talented attacking players, including Mallory Pugh, Tobin Heath, Lindsey Horan, Dunn and Christen Press, the team has enough finishers.

As talented as the U.S. roster is, the team lacks playmakers due to the absences of Holiday and Rapinoe. Holiday was one of the best playmaking center midfielders in the world up to her retirement and Rapinoe’s ability to create opportunities from the left side cannot be overstated.

While Horan, 21, and Morgan Brian, 23, are tremendous talents, neither are at the point yet where they can have that type of impact on the offense, as evidenced from these past three games in which they played together in the center midfield.

Their partnership will undoubtedly improve with more time playing together. However, letting Horan and Brian work through struggles and develop their chemistry may be a luxury Ellis doesn’t have with the Olympics less than 150 days. A central midfield that cannot dictate the U.S. offense and get the ball to Lloyd in dangerous spaces negates the team’s most valuable weapon.

Ellis could bring Lloyd further back in the formation into the midfield, making it easier for her to get the ball and dictate the offense. One possible way to do this is simply flip Lloyd and Horan. Horan was a forward at PSG and has exhibited her attacking ability with the national team. She certainly would not be out of place in an attacking role.

With Lloyd in the midfield, Brian would play a more disciplined defensive midfielder role as she did at a very high level at the World Cup. This would allow Lloyd to still move freely through the offense.

Having Lloyd in an attacking midfielder role as opposed to playing forward allows her to set the table for her teammates, an ability this current roster lacks, while still getting forward and having scoring chances herself.

If Ellis keeps Lloyd in her current position, then she must find the right mix of players to surround her, specifically at the outside midfield positions. Lloyd did not see much of the ball while flanked by Heath and Pugh against England and France. In the team’s final match, Dunn and Press were able to give the team more width from the outside midfield while also combining with Lloyd in attack.

Ellis has a tall task in finding the best way to deploy Lloyd. It’s a task every coach in the world would like to have in front of them, but that does not make it any easier.

There is no doubt that the national team’s performance at the Olympics will weigh heavily on the shoulders of Lloyd. Whether her current position is the best place for her to carry that load remains to be seen.