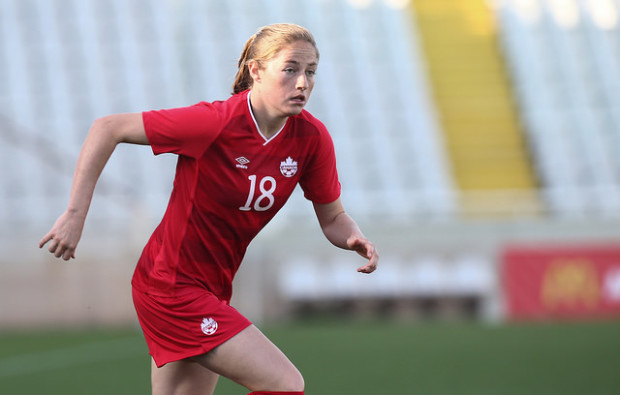 The United States will have a training camp in May and two friendlies in both June and July as preparation for the Olympic Games in Rio this August. The information was part of the 2017 fiscal budget obtained by Hal Kaiser of keepernotes.com and posted via Twitter. The budget also accounts for another 10-match Victory Tour and a domestic tournament next March, presumably the continuation of the SheBelieves Cup.

So the USWNT budgeting/planning for a 10-match victory tour if they win the Olympics. pic.twitter.com/H6DjGJdIYo

The packed schedule suggests the national team players be missing large chunks of time again during this NWSL season. In 2015 the World Cup roster was available for only 11 of 20 matches. There was also the post World Cup flap when the team decided, apparently en masse, to sit out league matches the weekend after the World Cup, leaving scores of frustrated ticket holders in several markets.
***
Canada defeated Iceland 1-0 behind a goal from NWSL draft pick Janine Beckie and took Group A at the Algarve Cup. Canada will play Brazil, who went undefeated to win Group B, in Wednesday’s championship match. Neither team has ever played in an Algarve final. Beckie was drafted 8th overall by the Houston Dash in January.

In the other placement matches, New Zealand will play iceland for 3rd place; Belgium vs Russia for 5th; and Belgium vs Portugal for 7th.
***
The Breakers have named Neill Caine the club’s new goalkeeper coach. Caine replaces Ashley Phillips who will remain with the club in a consulting role. A native of Northampton, England, Caine worked with Leicster City FC before moving to the United States a decade ago. Phillips was recently named head coach at Northeastern University.