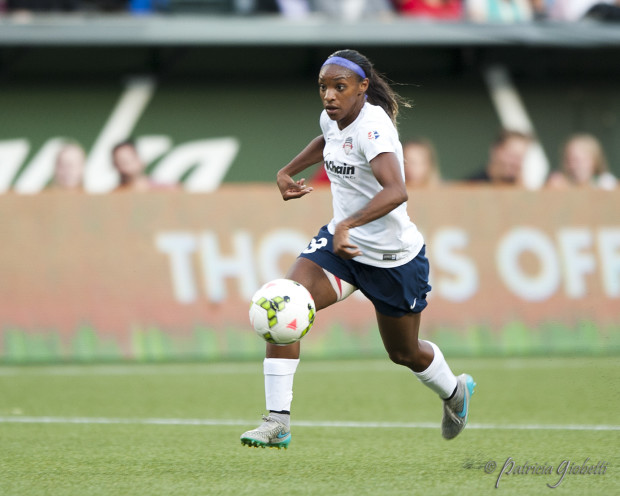 Crystal Dunn’s 72nd minute wonder strike gave the United Sates a hard-fought, 1-0 victory over England in the opening match for both at the SheBelieves Cup at Raymond James Stadium in Tampa, Florida. The U.S. struggled to find an offensive flow for much of the night but Dunn rescued them with a fantastic effort and a near flawless performance by the defense handled the rest.

The goal followed some of the U.S.’s only sustained period of possession in the attacking third. Still it appeared England had things under control until Meghan Klingenberg put a soft pass to Dunn who had her back to goal wide of the 18-yard box. With her cat-like quickness Dunn took a touch toward goal that was enough to create space from her mark Steph Houghton. The space created was just enough for Dunn to step into the corner of the box and hit a knuckling shot that literally went into the opposite top corner beyond the outstretched and diving Karen Bardsley.

“Well DUNN by Crystal!” Fantastic opening goal for the #USWNT in the #SheBelieves Cup. #USAvENG https://t.co/kmB1JRI3jj

England controlled the midfield for large portions of the match and frustrated the United States with their pressure. But they were rarely able to turn that into dangerous attacking play. They may have had a penalty in the first half when a ball appeared to deflect off Becky Sauerbrunn’s hand in the box but there was no call. In the second half, with the match still scoreless, Toni Duggan led a two-on-one but elected to shoot rather than cross to an open Jodie Taylor. Hope Solo made a routine save on the shot.

[LAULETTA: What we learned from USWNT win over England]

The United States and Germany sit atop the SheBelieves Cup standings after posting identical wins on the opening match day. The tournament resumes Sunday in Nashville with the United States playing France and England facing off against Germany in a rematch of the third place match from the World Cup.

SheBelieves Cup: Germany 1-0 France
What we learned from USWNT win over England