“It is clearly one of the best soccer venues in this country and we are thrilled to showcase our team in such a great location,” general manager Huw Williams said. “We are creating something special at FCKC and we believe Kansas City soccer fans will be right behind us as we celebrate the back-to-back championships and prepare for another title run.”

The Blues played their 2015 home opener at Children’s Mercy and lost 1-0 to Sky Blue in front of a franchise-record crowd of 8,489. A potential second appearance after the World Cup was scrapped when NWSL made some scheduling adjustments to accommodate commitments for national team players. FC Kansas City will play their remaining home matches at Swope Soccer Village marking the first time the club has returned to play in the same venue for a second season.
***
Two players who will not be joining FC Kansas City at Children’s Mercy Park are Liz Bogus and Meghan Lisenby. Both players announced their retirements on Tuesday.

Bogus was part of both championship teams, playing 31 regular season matches including 18 starts over two seasons in Kansas City. She also came off the bench for the final 14 minutes of the 2014 NWSL Championship against the Reign, who dealt Bogus to Kansas City following the 2013 season. The 32-year old was originally drafted by FC Gold Pride ahead of the WPS launch in 2009 but wound up on the Los Angeles Sol who won the regular season championship. She spent the remaining WPS seasons with the Boston Breakers.

Lisenby was drafted (as Meghan Streight) 16th overall in 2015. She appeared in five matches for a total of 14 minutes.
***
Tuesday’s third retirement was Michelle Lomnicki (nee Wenino) of the Chicago Red Stars. Originally a trialist for the WPS Red Stars in 2009, Lomnicki never let the Red Stars shake her and became an intricate part of the club in various roles through WPS, WPSL, and NWSL. Lomnicki continued to play after getting married and spent two full seasons balancing a full-time job as an analyst for Sears’ Holdings.

“Michelle has dedicated years to the growth of the Red Stars and to women’s professional soccer as a whole,” Red Stars general manager Alyse LaHue said. “She worked tirelessly on and off the field to help bring us where we are today. It’s difficult to imagine a season without her and we’ll certainly miss her beaming face. I’m grateful for everything she has done for the club.”

In her three NWSL seasons, Lomnicki started 39 of her 48 appearances and scored three goals. An open letter to fans written by Lomnicki is below.
*** 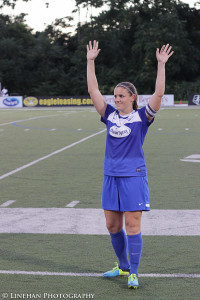 Cat Whitehill is back with the Breakers as an assistant coach and club ambassador. (Photo Copyright Clark Linehan for The Equalizer)

Cat Whitehill, who made a rather abrupt retirement early last season, is returning to the league as an assistant coach and club ambassador for the Boston Breakers. Whitehill was one of the last three players left to play every NWSL match (with Stephanie Ochs, and Jen Buczkowski whose streak remains active) when she slipped on wet stairs and broke a rib last April. Soon after she announced her retirement and later had her number retired by the Breakers.

“I’m so happy to be back with the Breakers organization in a new role,” Whitehill said. “I’ve wanted to get into coaching for some time, and I’m extremely grateful for the opportunity to take this step as part of the Breakers family.”

Whitehill (nee Reddick) was capped 134 times by the United States and was on the squad that won the Olympic gold medal in 2004. She also serves as an analyst for FOX and was in the booth with John Paul Dellacamera and Tony DiCicco for the U.S. games at last summer’s World Cup.
***

An open letter to fans by Michelle Lomnicki

Today I say thank you to the game that has given me so much. I have been extremely blessed to be given the opportunity to travel the world while playing the game I love. There comes a moment where every player has to say goodbye to their playing days. This sport has given me so much including long-lasting friendships, personal growth, and the opportunity to help inspire all of the young players who dream of playing in this league one day.

First, I have to say thank you to the Red Stars for taking a chance on me back in 2009. Emma and Denise provided me a great opportunity that helped me learn so much as a developmental player. Thank you to Rory for bringing me back to represent this club for a second time and for giving me a chance to further develop as a player and as a leader. To Arnim, your continued support of women’s soccer is invaluable. We have been given this incredible opportunity because of your passion to grow the women’s game. I can’t thank you enough for giving us the resources to play beyond college soccer.

Thank you to all my current and former teammates for making my experience as a professional soccer player an exciting and unforgettable adventure. I have created life long friendships and am very grateful for your support on and off the field over the years. To the fans, I can’t thank you enough for the support, not only for my career but also for the women’s game. This league is nothing without its fans!

To my mom and dad, thank you for pushing me to follow my dreams and supporting me in all my ventures. You have always been my number one fans from the moment I kicked a soccer ball to the last time I stepped off the pitch. You are the source of my strength, giving me the courage to dream big. Brian and Brad, the ones who instilled in me a passion for soccer at such a young age. I am extremely grateful to be your little sister and to follow your every move growing up. Thank you for your love and never ending support.

Thank you to my wonderful husband, Wes, who has helped push me to be the best version of myself both on and off the field. I would not become half the player I was without you encouraging me every day. I am excited for what the future holds for us.

It’s never an easy moment when your soccer career comes to a close, but the memories that soccer has given me will last forever. On to the next chapter, time to join all the Red Stars fans in the stands as my teammates and friends push toward an NWSL title. GO RED STARS!

Morgan optimistic about ’16 for USWNT, Pride
The Lowdown: My thoughts on the 2016 NWSL schedule