‘Bloodbath’? Canadians say US game will be ‘intense’ 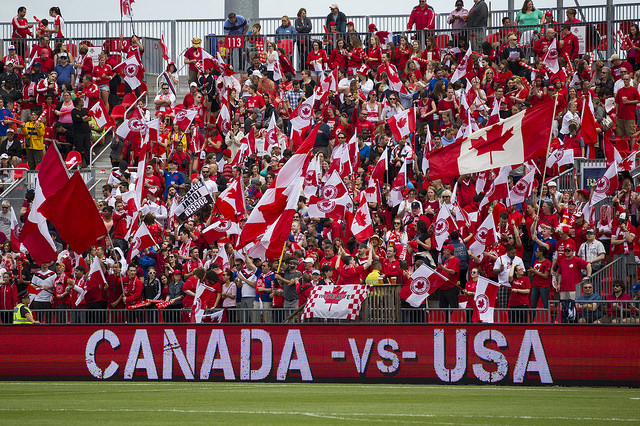 HOUSTON, Texas — The U.S. women will take on Canada in the Rio Olympic Qualifying final on Sunday afternoon at BBVA Compass Stadium and it’s certain to be a very intense match.

The Canada-USA rivalry has always offered memorable matches with subplots galore. Heading into Sunday’s encounter, the World Cup champions are talking the talk as they hope to close out the tournament with a convincing victory over their neighbours to the north.

Hope Solo was vocal as always as she described and anticipated a bloodbath between the two rivals.

“I love playing Canada. It always tends to be a bloodbath,” Solo said immediately after Friday’s win over T&T. “It’s a physical game, I get to be involved a little bit more. So, I don’t think it’s necessarily the most prettiest games when we play Canada, but hopefully with this new group of players, we’ll find a way around that, we’ll find a way around their kind of American football style of play. We’ll try to move the ball more around them and not get into that kind of blood match that we tend to do against Canada. That’ll be interesting to see if we can outplay them in that respect, because we don’t tend to previously. We kind of get into that physical match. That’ll be interesting to see if we can just move the ball, and we’ll have creative players on the field and keep possession and put them in their place.”

Melissa Tancredi is no stranger to playing in physical and intense matches against the U.S. The veteran Canadian striker had the ability to use her size to her advantage on set pieces. Tancredi, who is tied for the Canadian lead with three goals in this tournament, was taken aback by Solo’s comments.

“You know, the word ‘bloodbath’ is kind of rough,” Tancredi said. “It’s going to obviously be a battle, everyone wants to win the game. We’re here to win a game. The girls that are out on the pitch have one thing in their mind and it’s just to beat the U.S., so if you call it bloodbath, intensity. It’s going to be an intense game.”

Upon being asked about Solo’s interesting take on what she expects vs. Canada, Kadeisha Buchanan — winner of Best Young Player Award at the 2015 World Cup and recently selected to the first Women’s World XI — expects an intense game.

The U.S. came back and earned a 1-1 draw with Canada in the last match between these teams on May 8, 2014, in Winnipeg, Manitoba. Buchanan scored her first international goal in that match. She remembers the goal and the excitement she had matching up against Abby Wambach and the powerhouse United States.

“It was good vibes, I felt like the team had a really good turnout vs. the U.S. back in Winnipeg,” Buchanan said. “I do remember my first goal being against the U.S. off a corner. It’s definitely good times for me when I played against the U.S. I feel that’s when I showed how impulse I can be. Those are definitely great players and to defend at such a high level. I think that’s where I get my adrenaline, when I play the U.S.”

Buchanan is especially looking forward to going up against Alex Morgan and Carli Lloyd. As a defender, facing some of the top goal-scorers in women’s soccer is a highlight for players like Buchanan. Making sure she matches her speed will be a priority as will being in the right position at the right time.

Shortly after winning the World Cup, Morgan suggested that Canada is a slightly “dirty” team while appearing on “Jimmy Kimmel Live.”

The notion that Canada plays an underhanded dirty style of football doesn’t go down well with Buchanan and her teammates. Nobody wants that label. Staying inside that boundary and not going overboard is key. Twenty-year-old Buchanan plays hard, whistle-to-whistle and chalks up Morgan’s comments to pure trash talk.

“Yeah, I think that’s more trash talk,” Buchanan said. “What I see as ‘dirty’ is players hitting you after the play or not going for the ball. I don’t think that [any] of our teammates intend to just to go for their legs, or hit them with cheap shots when the referee is not looking. I think that’s a dirty play. What we do, is set our physical dominance on them and always go after the ball.”

Following her hat-trick and a 5-0 U.S. win over Trinidad and Tobago to clinch a berth to Rio, Morgan talked about the importance of playing Canada what type of tactics she expects to see from John Herdman and team Canada.

“Canada’s a really important game, obviously tonight was the game to qualify, but now it’s whether we’re going to get seeded in the Olympics and whether we’re going to get that top seed,” Morgan said. “The game against Canada is very important, obviously it’s a very physical game. Canada sucks up and brings their bus every time they play against us. We got to watch some of their game and I’m sure we’ll all be going back and watching more of their games in this tournament. We want to come out strong against Canada. We have a lot still at stake on Sunday.”

Lloyd will lead by example and she also knows that a Canada vs. U.S. match never seems to finish quietly. While U.S. coach Jill Ellis and the coaching staff will prepare for Canada. Lloyd will take it upon herself to brief her teammates and let them know what they can expect from Canada and how to best break down the opposition.

“It’s also my job to make sure everyone knows that we still have one more to go even though we’ve qualified in the semifinal,” Lloyd said. “We still came here to win the tournament and it’s not going to be easy. Canada’s doing really well. It’s going to be a tough, gritty game, and another final to be able to compete in.”

[JOHAL: Canadians were quietly always confident that they would qualify]

Canada’s last victory over the United States was over a decade ago, in 2001. Christine Sinclair is the only player on Canada’s current Rio Olympic Qualifying roster that played in that match. Four years ago in Vancouver, the U.S. dominated Canada and beat them 4-0 in the closing match of the 2012 London Olympic Qualifying tournament. A lot of players will be playing in their first Canada vs. U.S. rivalry match. Allysha Chapman is one of those players and she couldn’t be more pumped to get on the pitch.

“I’m excited, this is my first meaningful game against the U.S. that I’ve played in,” Chapman said. “I’m really excited for the challenge and I think we’ll give them a good fight.”

Lloyd and the U.S. are ready for a good fight, too.

“I’m looking forward to it. I’m ready to get the gloves on and get to work. It’s a big rivalry, yeah we’re rivals for sure.”