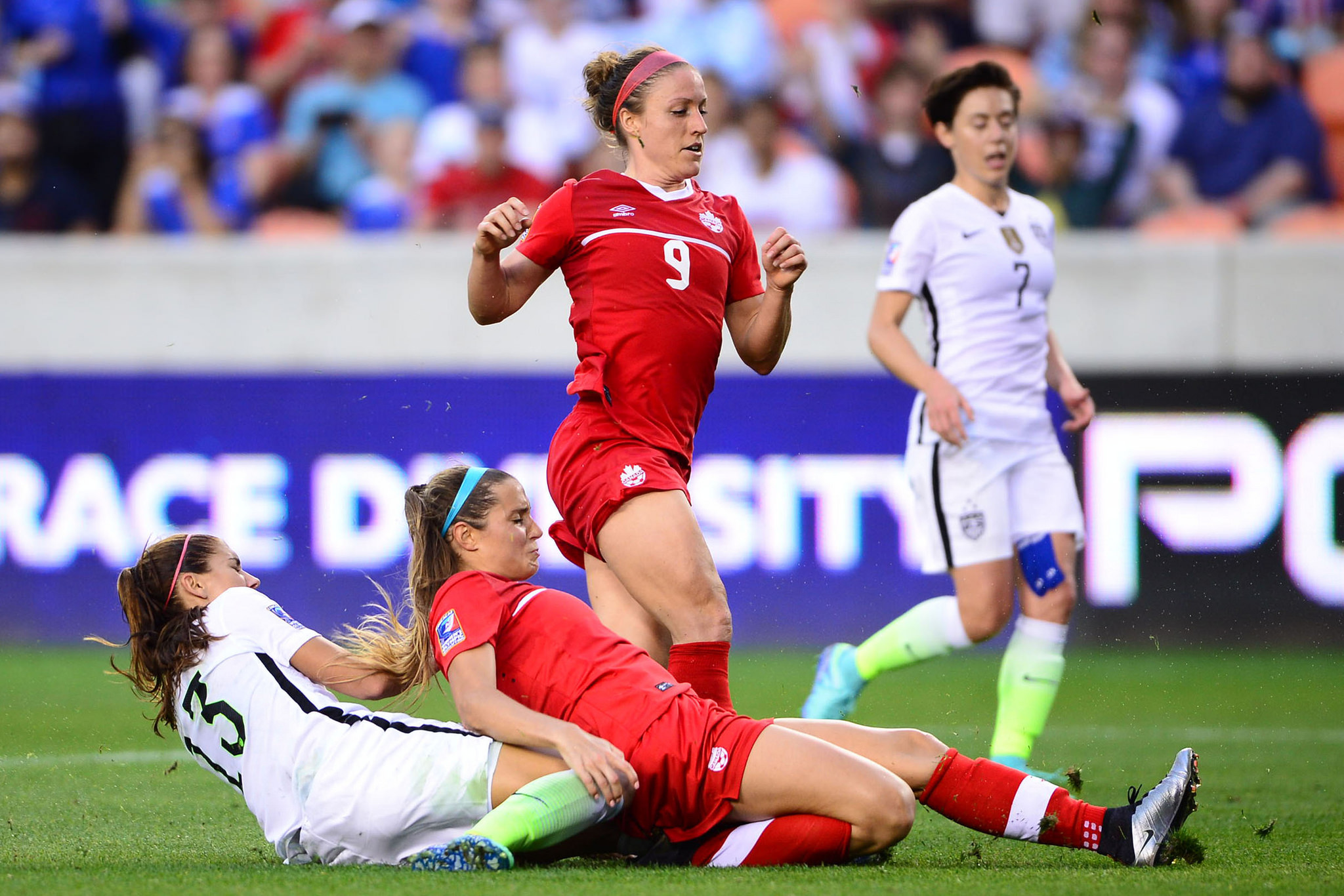 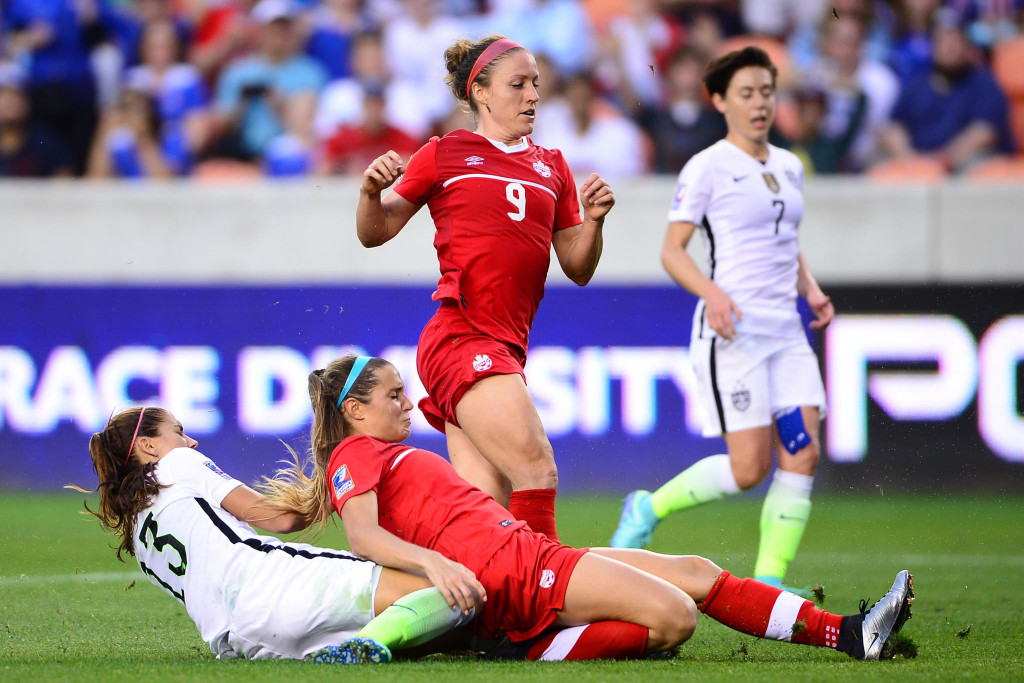 HOUSTON, Texas — One thing was clear on Sunday at BBVA Compass Stadium: Canada can hang with top-tier opposition like the United States.

The days when the U.S. would run up the score and beat up on Canada are over, although the U.S. remains unbeaten against their northern neighbors in the past 31 games and 15 years. Lindsey Horan and Tobin Heath scored in the second half to lift the U.S. to a 2-0 victory.

Lesson 1: Progress  |  Canada coach John Herdman has developed the youth system since taking over in 2011 and he has done a great job with finding talent and growing the next generation Canadian players. The compete level for Canada is certainly there. They are organized, tactically smart, and prepared for whatever the U.S. throws at them. Canada’s parking the bus strategy that we’ve seen in previous matches against the U.S. is not a present tactic. The red and white can get up and down with the U.S. and play at their level. The only thing missing is goals and finding a way to get behind the U.S. back-four to really challenge Hope Solo. That day will eventually come as players like Nichelle Prince, Deanne Rose, Ashley Lawrence, Jessie Fleming and Janine Beckie continue to develop. Opportunities for the Canadian youngsters really helps prepare them for strong opposition like the World Cup champions. You can only improve by playing higher-ranked competition. The likes of Germany, France, England, Japan, Brazil, are teams Canada needs to be playing more often to help the next generation of Canadians grow. While Christine Sinclair is still filling the back of the net like nobody’s business, she needs help playing the United States in an important match, even if it means nothing on paper, it goes a long way. (Sinclair played the final 30 minutes in Sunday’s loss). Cutting their teeth in a rivalry with big brother U.S. is the perfect way to show Herdman and his coaching staff what type of players Canada has. While Canada lost 2-0, this was a valuable match and measuring stick for Canada as they prepare for the Rio Olympics next summer.

Lesson 2: Depth  |  The depth of Canada’s talent pool is still a work in progress. Herdman talked about how goalkeeper Erin McLeod in his opinion is the top goalkeeper in women’s soccer. There is a bit of a drop off when McLeod doesn’t play. She commands the game so well and her ability to read a play and communicate with her defense is a great asset. Steph Labbe misjudged the ball on Lindsay Horan’s goal on Sunday. With more playing time, perhaps at the Algarve Cup, Labbe will have a great opportunity to get some valuable minutes and form an even better relationship with the Canada back-four. Sinclair is a game-breaker, and even at 50 percent health she is still one of the top players in women’s soccer. Sinclair had to take an injection for her calf injury just so she could play Sunday. If the match had entered extra time, Herdman would have pulled her off the pitch and played with 10 players, he said. The importance of a healthy Sinclair is huge. Melissa Tancredi scored three goals in this tournament, but at 34 years old, she isn’t quite the player she once was. While Prince, Beckie, Carle and Rose are great up and coming players, you don’t get the same result when Sinclair doesn’t start. When Canada has players who are not 100 percent fit, they don’t yet have the depth to replace them and get the same result. The talent wave is getting better, but it’s not there yet. Canada’s strategy of playing a high press physical match worked until the Horan tally. Finding a way to play 90 minutes without those key mistakes is tough when Sinclair and McLeod aren’t healthy enough to start. The U.S. depth is off the charts and one day, Canada hopes to be able to match that. Bringing in new players through the youth system is a tremendous help. However, it’s still a bit of a problem when Canada’s best aren’t able to be at their best because of a knock.

Lesson 3: There is animosity  |  The Canada vs. U.S. rivalry is alive and kicking. Despite not playing each other since May 2014 in Winnipeg, there is no love loss between these rival teams. With less than 48 hours between the semifinal and final match of the tournament, the war of words and trash-talking was ramped up a bit. We all know about Hope Solo’s ‘bloodbath’ comments, and how some of the Canadian players reacted. The physical play from Tancredi often seems to stir things up drawing the ire of supporters. Not to be outdone, Herdman seemed to interject a few Jedi mind tricks by suggesting during his press conference on Saturday that Jill Ellis would not play Mallory Pugh, or many of the U.S. youngsters. To her credit, Ellis played Pugh and she had a brilliant match setting up Heath for the second goal. Prior to this encounter, Alex Morgan suggested that Canada always brings their bus against the U.S. While many players are teammates in the NWSL, when it’s a Canada vs. USA game in either country, it’s a must-watch and both teams want to come away with a win. Canada hasn’t defeated the U.S. since 2001 so for the most part the rivalry is viewed as more of a rivalry from a Canadian stand point. Canada and the U.S. have played many memorable matches, with August 6 in Manchester, England being the top battle. The U.S. came away with a 4-3 win in controversial fashion in that Olympic semifinal and went on to win gold at the 2012 London Olympics. Many women’s soccer supporters have called that match the most exciting game in the history of the sport. These two teams often create a classic match and it’s always exciting on and off the pitch leading up to and during a Canada vs USA derby.