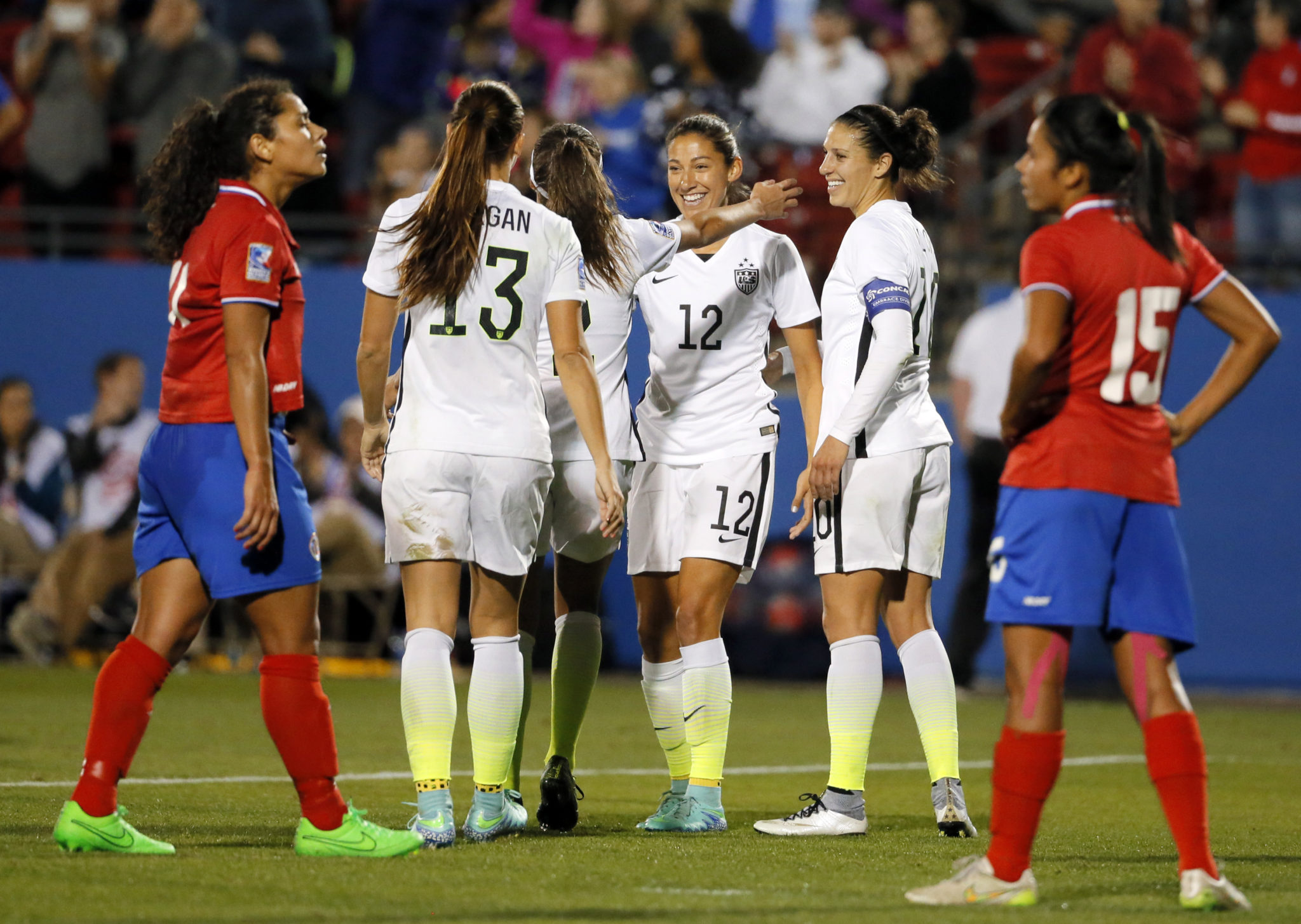 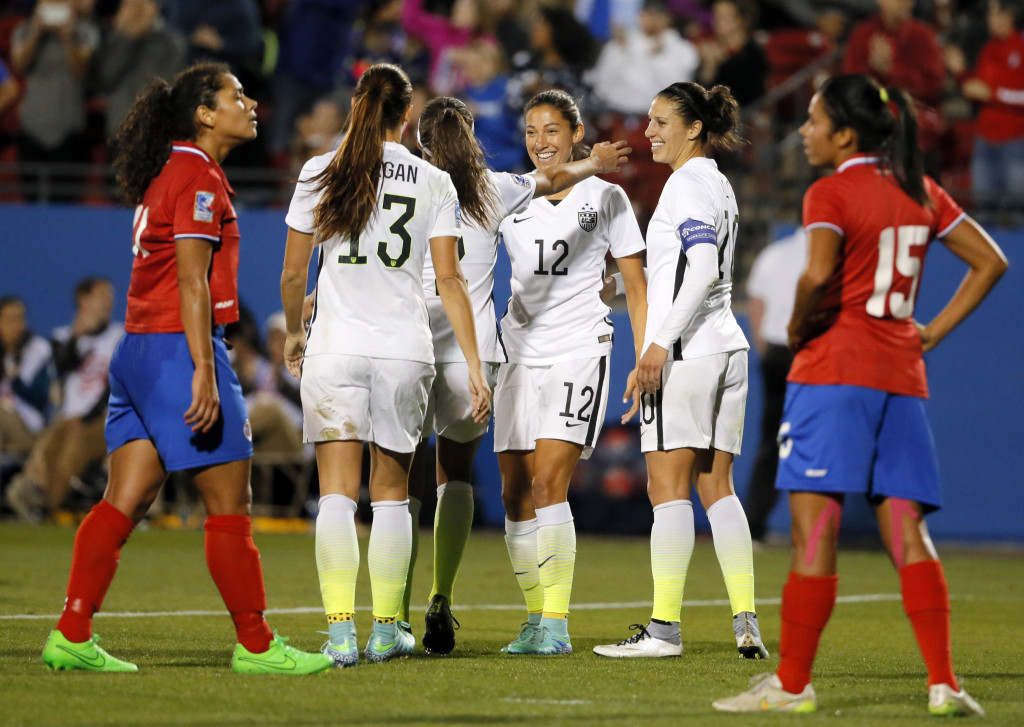 The U.S. women are one win from the Olympics. Is the system of jamming five games into 11 days really the best way to hold qualification? (AP Photo)

HOUSTON, Texas — Women’s Olympic Qualifying action is about to get a lot more competitive with both semifinal matches kicking off at BBVA Compass Stadium on Friday.

The U.S. women are heavy favorites against Trinidad and Tobago, and John Herdman’s high scoring Canada squad is also favored to defeat Amelia’s Valverde’s Costa Rica side. Thus far in the tournament, the U.S., Canada, Costa Rica, and an eliminated Mexico team batter the likes of Puerto Rico, Guyana, Guatemala, and Trinidad and Tobago.

Scores lines of 10-0, 9-0, 6-0 and 5-0 have become commonplace as non-2015 World Cup teams have struggled to defend and get forward with any kind of potent attack. It can be tough for teams to remain switched on when facing opposition that doesn’t match up at an even level.

Carli Lloyd, the 2015 FIFA Women’s Player of the Year, is hoping some of the teams in CONCACAF will be able to earn more support from their football federations to help continue growing and developing the game in their respective countries. Puerto Rico was never going to challenge the U.S., but for Lloyd, they seemed glad to have been in the position to gain experience against the World Cup champions.

“I think it’s been great we’re seeing the evolution of the game change each and every year which is a great thing,” Lloyd said. “We saw it in the World Cup. You take a team like Puerto Rico, who hasn’t qualified for a CONCACAF qualifying tournament ever. Just the amount of class and admiration that they had, they were just super excited to be here. I hope with support from their federation that they can continue their quest to be back here next time, it’s just great to see. Trinidad has done well, Mexico played well against us, very organized, sat in a bit. Costa Rica, good showing. I think the teams are definitely getting a lot better and that’s what we want for the game.”

Perhaps teams like the U.S., Canada, Costa Rica and Mexico could use a bye into the knockout round with other teams fighting it out to join them for a spot at the next Olympics. If a format change is in the cards, Lloyd isn’t sure if that’s really a good thing.

“I’m not really sure, maybe the World Cup winners won’t have to qualify next time,” she said, jokingly. “It’s good to play a round of games, though, I enjoy it.”

U.S. coach Jill Ellis is confident her squad will be ready for Trinidad and Tobago and she knows that nothing is ever certain.

“When you get to this level and you’ve played as many games as a lot of these players have you know that there aren’t any guarantees,” Ellis said. “You’ve been on the end of games where you’ve been the better team and lost and you’ve been the lesser team and you’ve won. I think sometimes that’s just the nature of our sport. I think these players are experienced enough to know that it’s really about executing our performance. There’s no gimme in this game and it’s about respecting the game and obviously our opponent and being focused on what we need to do. It terms of taking the foot off the gas, this is actually where the pedal goes down.”

Throughout the tournament, U.S. and Canadian players have stayed focused and on point when discussing some of the less-talented opposition. Anything can happen; bounces may go the wrong way and controversial call could put a new spin on the match. U.S. center back Becky Sauerbrunn will be prepared for whatever takes places against Trinidad and Tobago.

“Fortunately for us we’ve played Trinidad quite a few times and if you look at World Cup qualifiers, we only won that game, 1-0,” Sauerbrunn said. “You never know on any given day what’s going to happen. If the ball’s just not bouncing our away or Trinidad’s playing the game of their lives, and maybe we just don’t have enough players that show up…. you just never know. We’re all very mentally prepared. We all know this is a very serious game. We’re really preparing hard, and we’re going to take it to them.”

Veteran fullback Rhian Wilkinson has seen her fair share of CONCACAF tournaments. The overall talent and skill level is getting better, but it’s a slow process. The opportunity of matches for the likes of Guyana, Guatemala, and Puerto Rico goes a long way in the development of theses nations who are still working to grow and develop soccer. Does Wilkinson think the format for Olympic qualifying needs to change?

Midfielder Desiree Scott was a big factor for Canada in securing qualification and a spot at the 2012 London Olympics. She has seen the overall quality of opposition grow, and she expects an intense battle against Costa Rica.

“When we hosted the tournament in Vancouver [in 2012], we came out and saw the opposition and built on what they could do,” she said. “And now I think the growth and turnover of players, competition is getting more fierce and I think Costa Rica will be one of those competitions tomorrow.”

How does Sauerbrunn keep getting snubbed?
Canadians were always confident in Rio qualification