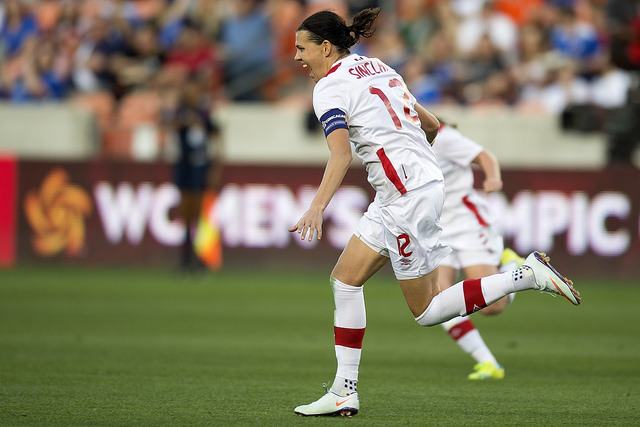 Canada’s women’s national team is heading to the Olympics for the third time.

Canada beat Costa Rica 3-1 this evening in the first semifinal of the CONCACAF Olympic Qualifying tournament at BBVA Compass Stadium in Houston, courtesy of a brace from captain Christine Sinclair and a third goal from Deanne Rose.

Sinclair opened the scoring for Canada in the 17th minute. Josee Belanger served in a cross from the right flank and the ball landed to Sinclair at the top of Costa Rica’s six-yard-box, where she volleyed it home.

Sinclair added another in the 52nd minute, when she was left open at the top of Costa Rica’s 18-yard-box. Spinning, Sinclair fit the ball just under the cross bar, a beautiful strike for her 161st international goal.

Costa Rica pulled one back in the 73rd minute when Desiree Scott was called for a foul in Canada’s 18-yard-box, and the referee pointed to the spot. Raquel Rodriguez, fresh off her Mac Hermann trophy win as top NCAA player of the year, calmly slotted the ball in past Canadian goalkeeper Erin McLeod.

But 16-year-old Deanne Rose sealed the deal for Canada in the 86th minute. Two Costa Rican defenders collided into each other going up for the ball in the air, leaving Nichelle Prince free to run onto it. Prince delivered a low cross to Rose, who buried it past Costa Rican keeper Dinnia Diaz to provide some insurance for the Canucks.

USA and Trinidad and Tobago face off for the final CONCACAF Olympic berth at 8:30pm ET.