T&T hope to play spoilers vs. US in semifinals 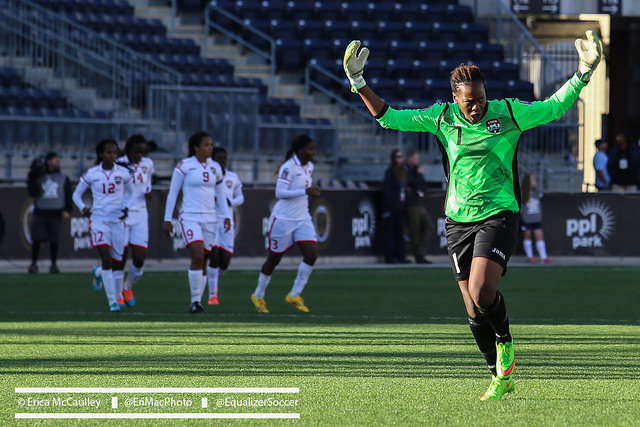 Goalkeeper Kimika Forbes leads Trinidad and Tobago against the United States in the semifinals of Olympic Qualifying. (Photo Copyright Erica McCaulley for The Equalizer)

HOUSTON, Texas — Trinidad and Tobago have earned the right to play World Cup champions USA for a spot at the Rio Olympics in August. Trinidad and Tobago came up with a surprisingly strong 5-1 victory over Guyana. This is the same squad that looked all out of sorts and nowhere near a the semifinals after a disastrous 6-0 loss to Canada on Sunday afternoon.

Now, on Friday, Trinidad and Tobago will face the United States in the semifinals of Olympic Qualifying, with the winner clinching a berth at the 2016 Rio Olympics.

T&T coach Richard Hood was able to get his team motivated and turned around quickly in an important match vs. Guayana. Trinidad and Tobago opened the scoring early and were on cruise control for the entire match. Guayana coach Mark Rodrigues noted that the speed and transition play from Trinidad and Tobago was too much to handle for his young Guyana squad.

Going up against the U.S. will be an honor for Trinidad and Tobago and they know they will be massive underdogs in a match that nobody expects them to win. The U.S. women are three-time defending Olympic gold medalists and Hood knows it is a monumental challenge Trinidad and Tobago will face on Friday night.

“It’s going to be an extremely difficult task,” he said. “It’s not something that the opponent looks forward to. It will always be an honor to take the field against such a team. We will try our best and do the best that we can. I think that’s all that we can do at this point.”

“I think we will take a lot,” Mollon said. “Being so close and having the opportunity to play on the big stage, I think my teammates and myself will be happy to take the field with the champions and see what we are made of to make that dream come alive of playing at a major tournament. We’re looking forward to it. It’s a major challenge and that’s what the beautiful game is all about.”

Trinidad and Tobago will have to excel on the counter-attack with speed and athleticism, when and if the U.S. can be caught at the back for a fast break. The 48th-ranked squad will have to keep the score close if they have any chance of upsetting the top-ranked Americans.

“Once we build off of that and try to use our assets, we stand a great chance of ruining the U.S. come Friday,” said a confident Mollon.

Realistically the United States should dominate the match, however matches aren’t played out in the press or on paper. If Jill Ellis and her players come out at all complacent against Trinidad and Tobago, they could be in a tougher than expected match.