Canada not taking Costa Rica lightly with Rio on the line 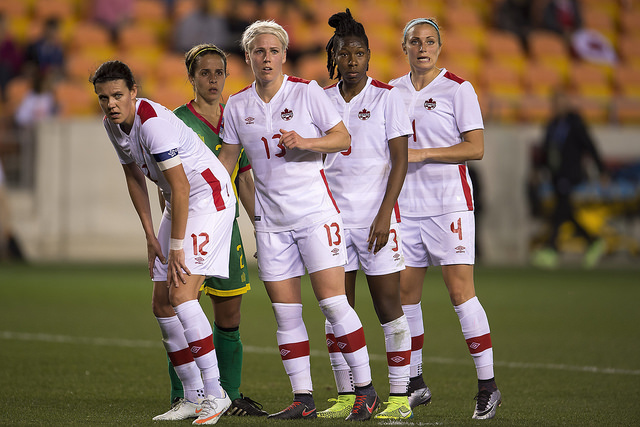 Canada will be looking to qualify for their third Olympic Games on Friday. (Photo: Canada Soccer)

HOUSTON, TEXAS – Canada will take on Costa Rica on Friday with a spot at the Rio Olympics on the line. The opening semifinal match at the 2016 CONCACAF Olympic Qualifying tournament at BBVA Compass Stadium will be a strong test for both teams, with Costa Rica looking to upset the Canadians and book a ticket to their first Olympic Games.

Canadian goalkeepers Erin McLeod and Stephanie Labbe faced next to nothing in terms of scoring threats from their group stage competition, as Canada thrashed opponents Guyana, Trinidad and Tobago, and Guatemala by a combined score of 21-0. Costa Rica finished second in Group A with six points, starting the tournament with a rocky 5-0 loss to the USA, but coming back strong with a 9-0 win over Puerto Rico and a 2-1 win over Mexico.

Canada and Costa Rica last met at the 2015 Pan American games last July, where Canada sent an under 23 squad, with the exception of Labbe, who captained the side, and Chelsea Stewart. Costa Rica beat Canada 2-0 in the tournament, courtesy of goals from Shirley Cruz and Karla Villalobos. Canada’s current roster features eight players who were a part of that Pan Am squad.

However, the last time both senior squads met was at the 2012 Olympic Qualifying tournament, where Canada beat Costa Rica 5-1. Six Canadians who featured in that match are on their current squad. Canada’s senior team has complied a 9-0-0 record against Costa Rica going all the way back to 1991, with Costa Rica have been outscored 30-3. In the John Herdman era, Canada is 2-0-0.

A confident Herdman sounded almost excited to be playing Costa Rica instead of Mexico in the semifinals. While Herdman wasn’t going as far as a to share his blue-print plan on how beat Costa Rica,  he was overjoyed with Canada’s next opponent.

“Yeah we were sort of hoping it was going to be Costa Rica coming out of that group,” said Herdman. “I think they’re an exciting team and it’ll make for a great game. They’ve improved massively and we’ve seen that in the Women’s World Cup, a 1-1 draw with Brazil. Canada knows how hard it is to get result against Brazil in our last games. They’ve got some quality players in (Raquel) Rodriguez and (Shirley) Cruz. 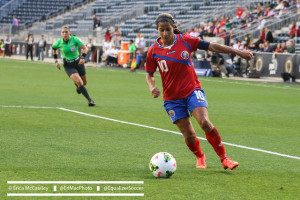 Costa Rica captain Shirley Cruz looks to qualify Las Ticas for the Olympics for the first time ever. (Photo Copyright Erica McCaulley for The Equalizer)

“We’ve seen them in 2012 and to be fair we obliterated them in the qualifying tournament, but those players were very young, just coming out of the U-20 team and hadn’t had a great amount of time together. Four years on and you can see their pedigree is starting to show. It’ll be a tough match, but I think we’re more than ready and just excited to play a really tough match.”

This will be a difficult task for a Canadian team that has faced zero problems tactically, formation wise, or via set pieces so far in the tournament. Canada has had 11 different goal scorers in the group stage of the tournament, and haven’t had to depend on Christine Sinclair to fill the back of the net. Melissa Tancredi, who scored three goals so far this tournament (after not scoring since the 2012 London Olympics), spoke about the importance of team-wide scoring depth.

“It’s so important especially in a tournament like this, you don’t want to rely on one or two players. You want all players firing on all cylinders and I think that’s what this team is doing right now. Everyone’s confident going into the important matches now. This is great, everyone is seeing the back of the net and hopefully there is more to come to keep it going.

“They still have Shirley Cruz who is their captain and by far the smartest girl on their team. They have (Raquel) Rodriguez, the young one up front who’s scoring a lot of goals and they have different ways of breaking you down. It’s just about being compact and confident going forward and understanding their threats.”

Costa Rica coach Amelia Valverde Villalobos will deploy PSG midfielder Shirley Cruz and Sky Blue FC’s Raquel Rodriguez to find the back of the net for Costa Rica. The red and white back-line of Allysha Chapman, Shelina Zadorsky, Kadeisha Buchanan, and Josee Belanger will have to set aside a full on attack-minded strategy with a much stronger opponent on the other side of the pitch. Canada is still the odds on favourite to advance with a win, but it won’t be a CONCACAF cake walk as we have come to expect.

Washington Spirit centre-back Shelina Zadorsky is optimistic in the partnerships and work Canada has put in during training camps and throughout this tournament. Canada’s chemistry on and off the pitch has the 23 year-old in a confident mind frame.

“I don’t think we’ve been tested too much thus far. I think these games help us build the partnerships and help us build in our communication and our organization. I think there is a lot of cover out there for each other. I think we’re ready for a test and hopefully we can go through with that.”

Zadorsky and Buchanan have formed a solid pairing at the back for Canada. As long as Canada can continue to play with pace and move the ball up the pitch with regularity, that should keep Costa Rica from getting forward. If any of the young and inexperienced Canadian players Herdman has brought along for the tournament panic, Costa Rica could pounce and take advantage of any mistakes. Canada won’t be taking Costa Rica lightly.

“For sure they’re a great team, watching them they have a great coach,” added Zadorsky. “They’re organized, technical, quick and it’s going to be a great opponent, definitely the best we’ve faced so far. We’re going to have to raise our level a lot.”

Costa Rica will bring the kitchen sink and then some as they hope to upset Canada.

Fit For 90, Dr. Cone bring sports science to soccer
How does Sauerbrunn keep getting snubbed?