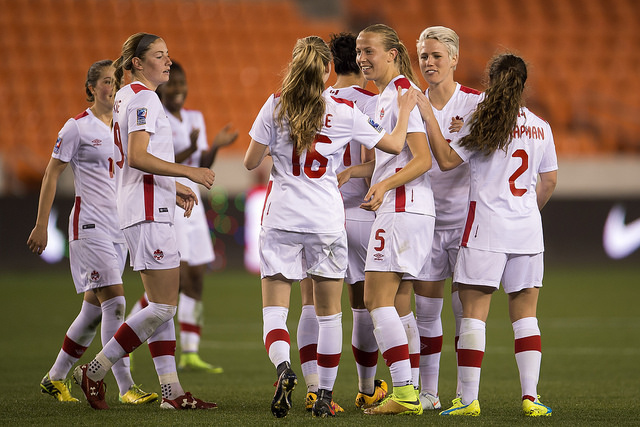 Canada finished off group B play at the 2016 CONCACAF Olympic Qualifying tournament in Houston with a 10-0 blowout win over Guatemala.

With a short turnaround between games and an eye towards Friday’s semifinal, Canada’s coach John Herdman made seven changes from Sunday’s starting eleven vs. Trinidad and Tobago. Rhian Wilkinson, Rebecca Quinn and goalkeeper Stelphanie Labbe received their first minutes of the tournament.

Melissa Tancredi opened the scoring in the fourth minute of play with a header off of a cross from Nichelle Prince, Tancredi’s second goal of the tournament.

Guatemela, ranked 76th in FIFA’s World Rankings, offered little in terms of offense throughout the match. The gap in quality and support between the CONCACAF nations was evident, as Guatemala finished the game with no shots, while they faced 33 from Canada.

Herdman tried out different pairings in central defence throughout the match, with Sophie Schmidt slotting in beside Kadeisha Buchanan when Shelina Zadorsky was subbed off in the 48th minute. Schmidt, usually a mainstay in the midfield, has played defence for Canada in the past, before Herdman’s tenure with the team. Quinn played in central midfield for just over an hour, and moved to the back-line to pair with Schmidt when Buchanan was substituted in the 63rd minute.

Earlier in the evening, Trinidad and Tobago beat Guyana 5-1, securing second place in group B.

Friday’s semifinals are now set, with Canada taking on Costa Rica, and the USA taking on Trinidad and Tobago, with the winners of each semifinal qualifying for the Rio Olympics.

Canada and Costa Rica last met at the 2015 Pan American games last summer, where Canada sent a mostly under 23 squad. Costa Rica beat Canada 2-0 in the tournament, courtesy of goals from Shirley Cruz and Karla Villalobos. The last time both senior squads met was at the 2012 Olympic Qualifying tournament, where Canada beat Costa Rica 5-1.

T&T rolls past Guyana, advances to semifinals
T&T hope to play spoilers vs. US in semifinals