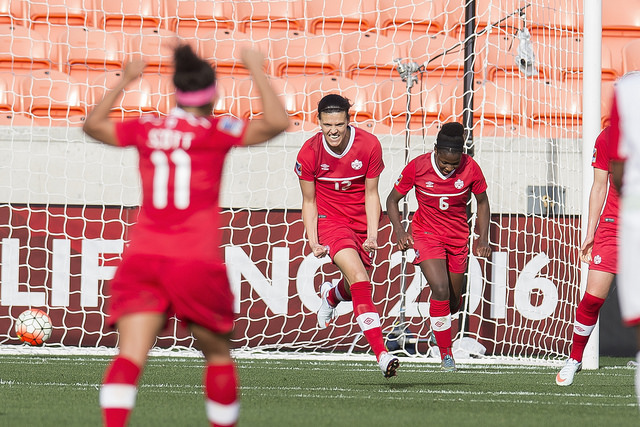 HOUSTON, Texas – Christine Sinclair did what many teammates and supporters thought she would during Rio Olympic Qualifiers: pass Mia Hamm for second place on the all-time goal-scoring list. Sinclair was rested from the start on Sunday and didn’t enter the match vs. Trinidad and Tobago until the 60th minute, and it didn’t take long for her to make history.

Canada coach John Herdman elected to go with a young lineup up front with Sinclair making a rare appearance on the bench to start the game. Once Sinclair entered the pitch, it only took three minutes for her to score that gratifying 159th goal. Sinclair was 1-v-1 with the keeper and calmly slotted the ball into the net.

For Sinclair’s teammates, it was fantastic to watch Sinclair pass Hamm and earn a massive personal milestone in her career. While Sinclair herself doesn’t like to talk about her achievements and goal-scoring success, teammates Melissa Tancredi and Diana Matheson — who also scored in Canada’s 6-0 win over Trinidad and Tobago — were more than happy to talk about their longtime teammate.

“Sincy sets the example,” Matheson said. “She’s not always the loudest, but she talks when she needs to. She leads with her play on the field and she has for how many years now? She’s really a role model for all of us, just how calm, classy, and skilled she is on the field.”

I have the best teammates (past and present) in the world. This would not be possible without you. #CanWNT #THANKU pic.twitter.com/mlvAb7mT1V

Sinclair made her senior debut at the age of 16 during the 2000 Algarve Cup and she has been piling up the goals ever since. Not only does she lead on the pitch, but she knows just what to say to motivate her team. Sinclair wears her heart on her sleeve and that was evident when she scored goal No. 159 and jumped up in the air with an enthusiastic fist pump. Even as veterans, Matheson and Tancredi still marvel and look up to Sinclair and all that she has done.

“I think she’s like a pure professional on the field for sure,” Tancredi said. “She’s quiet off the field, but she’s one of the most intense players you play with and play against. The passion for the game kind of shows in every game of hers. For sure a leader and somebody we all look up to, even us two.”

Canada doesn’t play as many matches as other international countries — particularly the U.S. — and isn’t often involved in lopsided matches. Sinclair has been a mainstay and as the top player Canada has every produced, male or female, she draws the attention of top defenders. All of that makes Sinclair’s accomplishments that much more extraordinary.

“It’s ridiculous, when you think about it,” Matheson said. “For someone from Canada, I mean we don’t play as many games as the U.S. does. We don’t beat teams double digits very often, so it’s not like we’re racking up the goals week in, and week out. For Christine to be the second all-time leading scorer, for a country like Canada is just absolutely unbelievable. It shows consistency and skill that I think is incredible.”

Not many professional athletes have the talent, work ethic and determination that Sinclair has. Tancredi remembers a special moment when she first realized how talented Sinclair was and just what kind of player Canada had.

“I think for me it was U-17 or some scrappy tournament we were at in Arizona,” Tancredi said. “That was the first time I ever saw her and she was this farm kid from Burnaby, I remember because I was such an Ontario snob. She was scoring all these goals and I was like, ‘This girl is a phenom.’ I was playing midfield at the time, because we just let her do her thing and now she’s just proven it. She’s so clinical and so calm in front of the goal and her technique is just incredible.”

Canada will look to qualify for the 2016 Rio Olympics on Friday with a victory in the semifinals of CONCACAF Olympic Qualifying. Sinclair isn’t bothered by the stage or pressure.

Going forward, does 32-year-old Sinclair have enough left to stay healthy and maintain her goal-scoring pace to pass Abby Wambach for first in all-time goals scored? Wambach retired in December with 184 international goals, the most of any male or female in history.

Tancredi has a confident even if somewhat playful prediction: “For sure, we got this by the end of the year. Nobody will score except Sincy.”