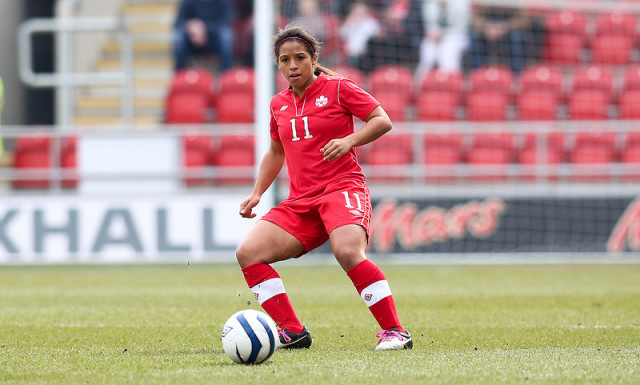 The Canadian Soccer Association and NWSL announced a list of 11 players that have been allocated by the federation to the league. The bombshell was the return of Desiree Scott to FC Kansas City after two seasons at Notts County. Scott was a regular starter for Kansas City as an allocated player in 2013 but left the league to sign in England.

“Des played a huge part in helping us establish the FC Kansas City culture in the league’s inaugural season,” Blues Director of Soccer Operations and General Manager Huw Williams said in a statement released by the club. “We have stayed in contact with her since she left and both parties have followed each other’s fortunes. We welcome her back with open arms and are very excited to see her in an FCKC uniform again.”

Other big names include Josee Belanger to Orlando and Shelina Zadorsky to Washington. Belanger more than makes up for the Pride using an expansion draft pick on Taryn Hemmings who is expected to retire. The arrival of Zadorsky in Washington paved the way for last week’s trade of Katherine Reynolds to Portland for Alyssa Kleiner.

The Spirit also finally acquired the rights to goalkeeper Stephanie Labbe after she was allocated to the Red Stars and traded to Washington. The Red Stars received Amanda Da Costa and the Spirit’s 4th round pick in 2017.

Janine Beckie, a 1st round pick by the Dash last month, was also allocated as was second-year goalkeeper Sabrina D’Angelo to the Flash. That opens up an international slot for the Flash. Beckie has American citizenship and was never going to be an international player for the Dash.