You can count Punxsutawney Phil among those getting ready for the NWSL season. The groundhog emerged to no shadow on Tuesday morning, signaling a proverbial early spring. That won’t get the new season here any sooner—the schedule still has not been released—but NWSL may as well latch on to the symbolism as the league continues to quickly escape the shadows of its two predecessors.

With that in mind, and preseason a bit more than a month away, this week we will look at each club and what things still need to be improved or cultivated ahead of opening weekend.

It would be easy to look at the goalkeeper position where Libby Stout is in from England to replace Alyssa Naeher. But we’re not going to go there, partly because it is clear the Breakers have improved defensively not only in back but in the midfield. Instead, the focus here will be proving they can score enough to rise from bottom-feeder to playoff contender. Since last donning a Breakers shirt, Stephanie McCaffrey has been capped and scored goals for the national team, but in some ways grinding out goals at the club level can be more difficult. Kristie Mewis, whatever her role turns out to be, should benefit from the improved defensive personnel. Kyah Simon will be key, although she could miss time with Australia, and newly signed midfielder Louise Schillgard will also be called on to help stimulate the attack.

The Red Stars are one of two teams in NWSL whose current roster makes them a Shield contender with few if any tweaks. Their defense should be as good or better than it was in 2015, especially after adding Alyssa Naeher in goal. Christen Press has settled in as an elite NWSL goal-scorer and could have had an historic season had she played every match and maintained her pace. If there is a concern it will be replacing the retired Lori Chalupny. Not only to Chalupny marshal the midfield the last three seasons, but her absence signals a sea change in leadership for a Red Stars team that once claimed Shannon Boxx and Karina LeBlanc. On the field it could be Vanessa DiBernardo doing more of the creative work in midfield while Press and Julie Johnston are likely to take on more pivotal leadership roles.

It has been a wild offseason for the two-time defending champions. They figure to be competitive as usual, but the weakness is rather obvious. Who is going to score? Not only did the club lose midfield creator Lauren Holiday to retirement, but her main target Amy Rodriguez is pregnant, as is her replacement, Sydney Leroux. Sarah Hagen was traded before news circulated about Rodriguez’s impending maternity leave. Eyes will be on Shea Groom, who might have contended for Rookie of the Year had she not broken her foot in May, and Tiffany McCarty who came in the Leroux trade. But the issue peals back to midfield as well, where the absence of Holiday is likely to force the Blues to change up some of how they do things.

[KASSOUF: Rebuild or business as usual for FC Kansas City?] 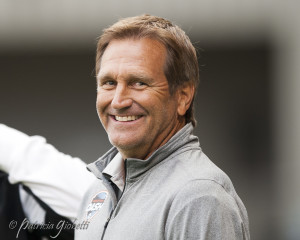 What does 2016 hold in store for Randy Waldrum and the Houston Dash? (Photo Copyright Patti Giobetti for The Equalizer)

The Dash continue to get better and by all accounts had a successful draft day even if one of their 1st round picks, Cari Roccaro, won’t start the season after undergoing hip surgery. But one area that has continually eluded the Dash is a strong central defense. A combination if injuries, absences, and roster mismanagement have conspired to make central defense an issue throughout the Dash’s tenure in NWSL. As it stands, Ellie Brush is the only solid starter in the position that could wind up being filled by committee again. The Dash also lost Erin McLeod in goal and while incumbent Bianca Henninger and newly signed Lydia Williams form a solid duo, they are both probably at least a slight downgrade from McLeod.

As an expansion side, the No. 1 issue will always be finding a solid identity that can carry the club forward regardless of whether they contend immediately. That said, the Pride have put together a roster that figures to be competitive so long as things work out as management has envisioned. The midfield and forwards have a chance to be very good and the same goes for the outside backs and goalkeepers. Central defense could be the area that makes or breaks the Pride. Right now it looks like Toni Pressley and Brazilian defender Monica Alves. Pressley is well-traveled around NWSL but has yet to latch on with a club as a reliable starter. Monica has international experience with Brazil and could be in the mix to be on the Olympic squad. With limited depth as well, the Pride will need to add center backs or squeeze the maximum out of the ones they have if their splashier acquisitions are going to help them into the playoffs on their debut season.

No team in any of the three leagues has ever had the type of offseason the Thorns have had, even with Mallory Pugh changing her mind about turning pro and the Amandine Henry signing not having happened (as of yet). The front line might be slightly thin, but there should be enough scoring in midfield for the Thorns to thrive and their roster basically has no glaring weakness. So what is their area of development? The onus is now on Mark Parsons to take the talent and make it a team. And that may require a delicate touch. Already it seems there won’t be enough room for Jodie Taylor and Allie Long to both be in the starting team and if other players arrive, the balancing act only gets trickier.

[MORE: No. 1 pick Emily Sonnett embracing the pressure of playing in Portland]

Like the Red Stars, the Reign are loaded and ready for another run at a title. Their offseason was stamped a success when they were able to keep Kim Little and Jessica Fishlock in the states and managed to keep Haley Kopmeyer as Hope Solo’s understudy. The roster, however, is not without some new challenges. Specifically, the left side of the formation will have a different look. Under-appreciated left back Steph Cox is retired and Megan Rapinoe is out at least until early summer with a torn ACL. Antonia Goransson and rookie Carson Pickett should help, but the experience lost will be an area to watch in the Emerald City this spring.

Draft day aside, it has been a quiet offseason for Sky Blue and unless they make some additions to the roster, depth will surely be an issue in New Jersey. Three specific areas stand out to me: One is wide midfield play, which can be rectified in a number of ways including a system tweak. The others are left back and goalkeeper. The leading candidates at left back are Maya Hayes and Kelley O’Hara. The former is a young forward who did some work to rave reviews at outside back last season. The latter is superb in the back but her addition to the front line in 2015 coincided with Sky Blue’s best attacking play of the season. In goal, the departure of Brittany Cameron to Vegalta Sendai in Japan leaves a grand total of zero minutes of professional experience at keeper.

[LAULETTA: State of the NWSL with commissioner Jeff Plush]

The Spirit have been semifinal losers the last two years and with a roster returning mostly intact, could be ready to take the next step into the elite. Katie Stengel has joined the team with an eye on taking some scoring load off Crystal Dunn’s shoulders. The impending Canadian allocation announcements will bolster the roster further. The keys to the season will be making a solid transition from Mark Parsons to new coach Jim Gabarra and making sure the right side of the defense improves after rookies Megan Oyster and Whitney Church held it down much of 2015.

The Flash are a difficult team to assess because they do not yet have a coach in place, which makes it difficult to guess how they will play. However they line up, the spine of the team will be a work in progress. The center back pairing is expected to be Abby Dahlkemper and Abby Erceg. Dahlkemper has loads of potential but was pushed wide and into midfield for much of her rookie season, while Erceg struggled mightily in Chicago last year. Goalkeeper is also an area of worry with Sabrina D’Angelo and Britt Eckerstrom the only rostered keepers. Both have high ceilings, but D’Angelo did not see the field again in 2015 after surrendering a soft goal to the Thorns in late July, while Eckerstrom is straight out of Penn State.