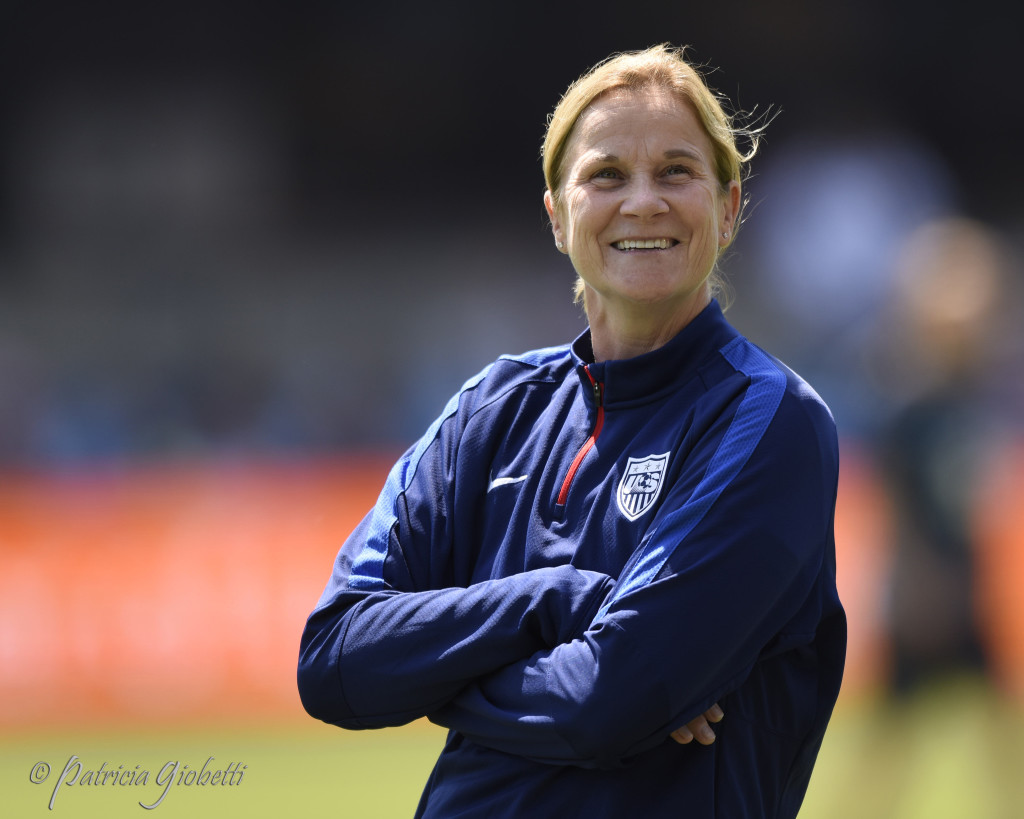 USWNT coach Jill Ellis faces another balancing act ahead of the Rio 2016 Olympics. (Photo Copyright Patricia Giobetti for The Equalizer)

Roster management, particularly at the international level, is always about balance.

That word is central to almost every decision on the micro and macro level. Is there balance within the team to adjust to opponents, injuries and suspensions within a short tournament? Is there a balance for a friendly to give new players a look but still maintain chemistry within the core?

These principles are nothing new. What changes and evolves are how they are put into practice.

Jill Ellis’ balancing act in 2015 was more short-term. Her task was to pick the right combination of 23 players for the World Cup. It was win or fail, and ultimately it was hard to argue with her group. The United States women went on to lift the trophy and even the one truly controversial cut from the squad, Crystal Dunn, turned that personal negative into an overwhelming positive, leading the NWSL in scoring and easily claiming MVP honors to set herself up as a lock for this year’s Olympic roster.

Now Ellis faces a similar balancing act in 2016, but with a little more freedom. She has a World Cup title under her  belt and although the U.S. women are three-time defending Olympic gold medalists, a handful of retirements, a pair of pregnancies and two notable injuries mean that new faces are aplenty heading into Olympic qualifying this month. Seven of the 20 players headed to Texas for the tournament were not on the World Cup roster, and eight players have eight caps or fewer.

Pugh has come under the spotlight in the past few weeks, scoring in her first international cap just days after her father announced that she was headed to UCLA this fall and would not be turning professional with Portland Thorns FC, as the Thorns and the rest of the league all thought she would be doing less than a week earlier.

Her rapid progression from first official camp with the U.S. in January to making the Olympic qualifying roster has been remarkable, but not entirely unpredictable. Ellis first saw Pugh up close when Pugh was a 12-year-old in the U.S. U-14 camp. Ellis had just taken the job as development director of the U.S. women’s program, and what she saw then in Pugh was a great athlete. Pugh still is – Ellis calls her one of the fastest on the team – but now 17 years old, her game has evolved.

“Pugh gave me some depth in the 10,” Ellis said, referring to the playmaking midfielder role. “I think she’s done well. She solves pressure well, she had a good camp and she is quick, she’s mobile. The biggest thing she lacks, obviously, is experience, but for me, looking at this roster, it was balancing that. 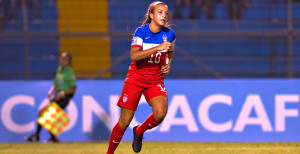 Ellis continued: “At the U-20 level she’s excelled and for some of these players, like a Rose Lavelle and a Dani Colaprico, the only way you really nudge them along is you bring them in this environment where everything is so much faster,” Ellis said. “Everything has to accelerate, and I think that was part of our thinking in her long-term development. We benefited years ago from putting (Mia) Hamm and (Heather) O’Reilly and (Kristine) Lilly – young players – into this environment and you never do that unless you believe that somebody is ready and that they can do well, but ultimately you have to see them in there.”

Pugh is the youngest player ever named to a U.S. Olympic qualifying roster and the youngest debutante for the U.S. in 11 years.

What she and the aforementioned young players on Ellis’ 20-player qualifying roster lack is experience against the world’s best teams, but that should soon change. The 2015 FIFA Women’s World Coach of the Year believes that she struck a formula last year in testing her team’s mettle early in the year ahead of the World Cup, and she will do the same in 2016.

“Retrospectively, going to Brazil when we did at the end of 2014, going to France when we did (in February 2015) – I knew at that point that we weren’t at our fitness peak and we weren’t played in, all those things,” Ellis said of her team’s buildup to the World Cup. “But I learned so much about the team in those environments, that that is why we play these games. What can we find out about ourselves before we go into that big event?”

The buzz around the U.S. team in 2015 was ‘peaking at the right time.’ Despite skeptics, that’s exactly what happened; the team caught fire in the quarterfinals of the World Cup after a change to the system, partly by force due to suspensions and partly by plan. Ellis pulled the right strings and pushed the right buttons, none more successfully than freeing up Carli Lloyd into an advanced role.

Now Ellis puts forth an even more challenging schedule to her players to prepare them for the Olympics, which they aim to qualify for later this month. The SheBelieves Cup in early March will see the top-ranked Americans host No. 2 Germany, No. 3 France and No. 5 England in a round-robin tournament. And there are plans to host No. 4 Japan – the Americans’ opponents in the past three major tournament finals – in an Olympic preparation match.

“We’re going to have the top five teams in the world in our country, and that’s exactly for that purpose,” Ellis said. “It’s because, going into the World Cup, I think it was maybe six or eight (players) who had yet to play in a massive world event. We’ll try and simulate that a little bit with the caliber of each game. We’ll give the players that experience. It’s a new chapter, and a lot of these players, the biggest thing they don’t have is playing time against the top teams in the world. That’s why this tournament will be invaluable.”

The SheBelieves Cup will feature a larger roster than the 20-player restriction (and three-goalkeeper requirement) of the CONCACAF Olympic Qualifying event, meaning a few players will re-enter camp next month.

And while there is plenty of focus on getting some of the U.S. team’s more green players experience against the best competition, Ellis has told those left off the qualifying roster – most notably, three-time Olympic champion Heather O’Reilly – that the Olympic team is nowhere near set.

“The message for the players that were close was absolutely that: Things can change. It’s not a sprint, it’s a marathon,” Ellis said. “A lot of it is knowing what those players bring to the table. If we take the experience of JJ (Julie Johnston), who didn’t make the Olympic qualifying, Dunn got hurt and dropped out and JJ replaced. So I think it’s always, you can never close a door and I certainly haven’t done that.

“I think all the players in camp are players that I could see helping us and benefiting us. I think the decisions were to look at certain skillsets that are specific to qualifying in terms of solving low blocks and massive numbers behind the ball. For the players that didn’t get selected, they still can add a lot to our team in terms of their experiences and their preparedness and getting ready.”

Ellis added that veterans Tobin Heath and Alex Morgan had strong showings in January camp. Morgan’s return to form will be particularly important in 2016 in the absence of Abby Wambach (retired), and Amy Rodriguez and Sydney Leroux, who are both pregnant and will miss the Olympics.

There are injuries to deal with, too. Defender and longtime captain Christie Rampone, 40, is still recovering from December knee surgery and her immediate status for March is unclear. Megan Rapinoe recently said that her goal is to be back from a torn ACL – suffered on Dec. 4 – in time for the 2016 Olympics, a tight timeline but one which Ellis is taking very seriously.

“I always talk about seeing players in the pressure cooker, but for some players you know what you’re going to get,” Ellis said. “And some it’s a little bit of exploring what you could potentially have. With Rapinoe, with the talented player that she is, I think if there is a player that can return – because she’s been through it (a torn ACL) twice before, unfortunately – I have not in any way, shape or form factored her out (for the Olympics).”

The potential of a nearing-full-strength Rapinoe — one of the team’s most talented players — in July would present Ellis with another tough decision for a slim 18-player Olympic roster. Just another balancing act along the way.