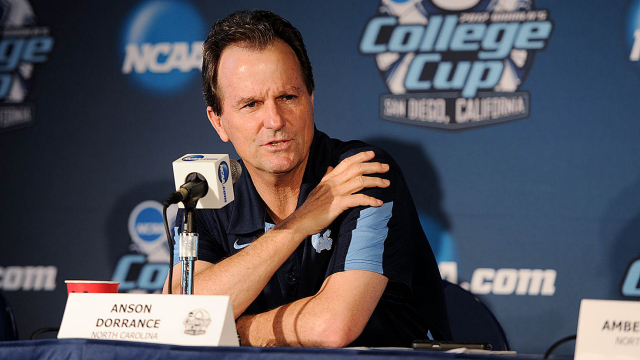 Anson Dorrance is the winner of the 2016 Werner Fricker Builder Award. (Photo: UNC/goheels.com)

U.S. Soccer calls the award its highest honor. It is given to an individual or group of individuals who have dedicated at least 20 years of service to the sport and who have worked to establish a legacy in the history and structure of the sport in the United States.

A member of the National Soccer Hall of Fame, Dorrance led the USA to its first Women’s World Cup title in 1991 in FIFA’s inaugural world championship for women’s soccer. He coached the U.S. team for nearly eight years after taking over in 1986, all while coaching at North Carolina.

Dorrance played at UNC and then became head coach of the men’s program, going 175-65-21 with the men and taking on double duty in 1979 as the women’s head coach as well. He led the Tar Heel women to the 1981 Association for Intercollegiate Athletics for Women title before the NCAA held a women’s soccer championship. Dorrance moved to coaching solely the women’s program in 1988, since accumulating 21 NCAA titles of the 34 contested and setting the all-time wins mark in college soccer history with a record of 792-63-32.

“It’s an extraordinary honor to be given the award named for the very man who made my U.S. Women’s National Team dream come true,” said Dorrance. “Also, I see the names of the previous winners as a list of mentors; people who gave me my first chances; wise individuals who guided me, inspired me, educated me and yes, on occasion defeated me on the field of play. These men are the backbone of a burgeoning world soccer power on both sides of the gender divide. Thank you for inviting me and my family to be a part of this celebration.”

Nineteen of Dorrance’s players at UNC have won the National Player of the Year award. Many of UNC stars have gone on to succeed at the international level; six of the 23 players on the U.S.’ 2015 World Cup-winning roster were Tar Heels.

“It’s a great pleasure to present the Werner Fricker Builder Award to the person who coached the U.S. women’s national team to its first FIFA Women’s World Cup title,” said U.S. Soccer President Sunil Gulati. “Anson has worked tirelessly over the years to build a program at North Carolina that led the way for other universities to invest in women’s soccer, and from which soccer in the U.S. has benefited tremendously for the past three and a half decades. His work with the national team and with national team players at the collegiate level has helped to grow the game at home and abroad, and his legacy in soccer will certainly be felt for many years to come.”

The award is named for Werner Fricker who served as U.S. Soccer President from 1984 to 1990 and was inducted into the National Soccer Hall of Fame in 1992.

Fricker is widely credited for playing a major role in bringing the 1994 FIFA World Cup to the United States. He was a member of the 1964 U.S. Olympic Team.

The President of U.S. Soccer appoints a task force to review the nominations and select a winner.