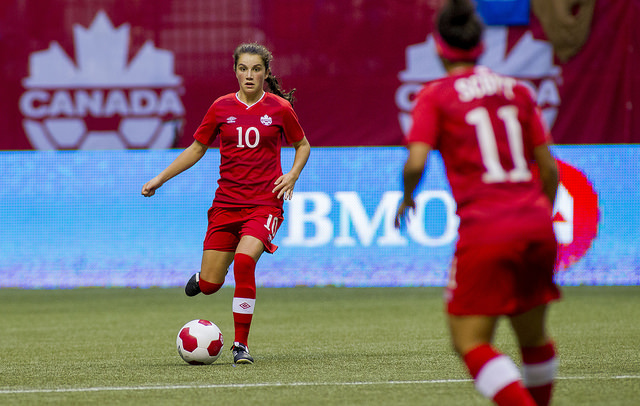 Canada will look to qualify for its third Olympic Games at the CONCACAF Olympic qualifying tournament in February. (Photo: Canada Soccer)

John Herdman named his squad of 20 players for February’s CONCACAF Olympic qualifying tournament this morning, featuring 13 players that were a part of Canada’s 2015 World Cup team.

The squad includes a mix of veterans and young players, including teenagers Gabrielle Carle, Deanne Rose and Jessie Fleming. All 20 players selected have been in camp this month in Vancouver.

“The team we have selected today represents the best of Canadian soccer, consisting of a subtle blend of youth and experience,” Herdman said. “Right now, we are in a position to focus on the upcoming qualification tournament and hopefully position ourselves to defend our Olympic bronze medal this summer in Rio.”

Notable omissions from the roster include Kaylyn Kyle, Lauren Sesselmann, Adriana Leon, Jonelle Filigno, Emily Zurrer and Marie-Eve Nault, all of whom were a part of last year’s World Cup squad and played significant minutes for Canada in 2015.

Canada begins their Olympic qualifying campaign in Group B against Guyana on February 11 at BBVA Compass Stadium in Houston. They then take on Trinidad and Tobago on February 14, and Guatemala on February 16, both in Houston as well.