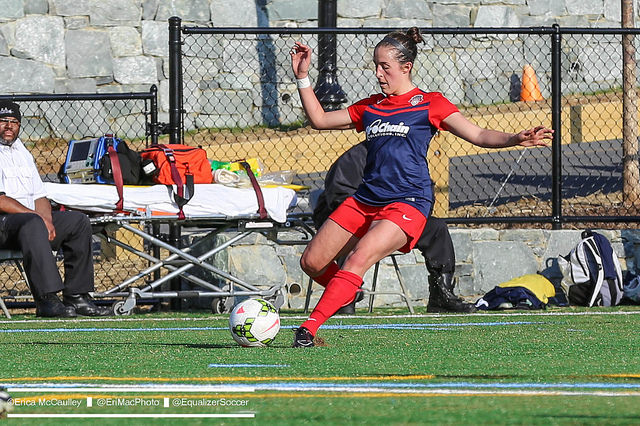 Amanda DaCosta has been traded to the Chicago Red Stars. (Photo Copyright Erica McCaulley for The Equalizer)

The Washington Spirit and Chicago Red Stars announced a trade on Monday. Officially the Red Stars acquired Amanda DaCosta and a 4th round pick in 2017 for a player to be named later. Multiple sources though have confirmed that player will be Canadian keeper Stephanie Labbe, who is expected to enter the league through the allocation process. The Equalizer’s Harjeet Johal reported earlier this month that Labbe was heading to Washington.

“I’m very excited to add Amanda to our group,” Red Stars coach Rory Dames said in a club release. “Besides being a terrific person, Amanda possesses the qualities we were looking for to fill our attacking midfielder role. We are excited to see what she is capable of once she has time to work with our front line.”

Dames also referenced DaCosta’s championship pedigree. She spent 2013 and 2014 at Liverpool and helped the club win the FAWSL title both seasons. Signed by the Spirit ahead of the 2015 season, DaCosta made seven starts out of 17 appearances and scored three goals.

This marks the second time Gabarra and Da Costa came close to crossing paths and coach and player. DaCosta signed to play for Sky Blue ahead of the 2012 WPS season but the league folded before that season happened. Before that she was drafted out of Florida State by magicJack.

“She is the perfect fit for what we need in this upcoming season,” Dames said of his newest midfielder.